Minecraft Nether Update was in the works for a long time. That was the main reason why Mojang didn’t want to announce an official release date for it. But now it seems the studio is happy with the state of the update since it received a release date. For all of you waiting to embark on a new Minecraft adventure, you can now save the date. Minecraft Nether Update will arrive on June 23 for virtually every version of the game. It arrives on Xbox One, PlayStation 4, Nintendo Switch, iOS, Android, Windows 10. As for the Java version of the game, it too will get the update on June 23 for Windows, Mac OS, and Linux versions. 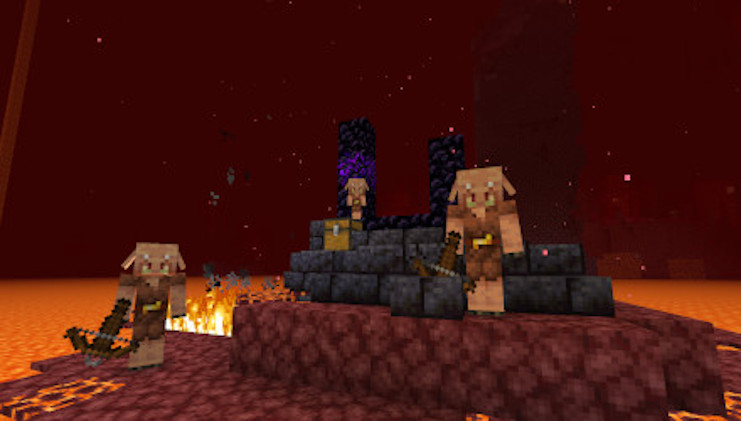 The most important part of the update is the lava-covered Nether. Yes, the majority of Nether is filled with lava, and if you’re not careful you’ll melt as soon as you fall into it. The update brings a lot of new stuff to Nether including new and updated enemies, and a redesign of the hellish world below our feet.

Minecraft Nether Update also brings new enemy types. Piglins are bipedal pig creatures that can be very dangerous if you get on their bad side. Luckily, they aren’t mindless monsters attacking everyone on sight. If you approach peacefully, they will be friendly, even willing to trade.

Next, we have Hoglins. These are pretty much wild hogs but in Minecraft style. These aren’t ready to trade. In fact, the best course of action is to avoid them completely. You can hunt them for food and resources, just watch out since they can be very dangerous. Minecraft Nether Update also removes Netherite from the Nether, almost. If you want to get your hands on it, you’ll have to salvage netherite scrap from debris found down below.

NEXT POSTEpic Games Store Latest Freebies Include The Escapists 2, Pathway