Epic Games Store continues to gift free games. During the last seven days we were able to claim Ark: Survival Evolved and Samuario Shodown NeoGeo Collection. This week there are also two free titles. They both are indie games and are free to collect starting later today. You’ll be able to get the two games for free until next Thursday, June 25th. The first Escapists game has already been free on the Epic Games Store earlier this year but if you grabbed it but didn’t have a chance to play, we can recommend the sequel over the original since it improves the game in many ways. 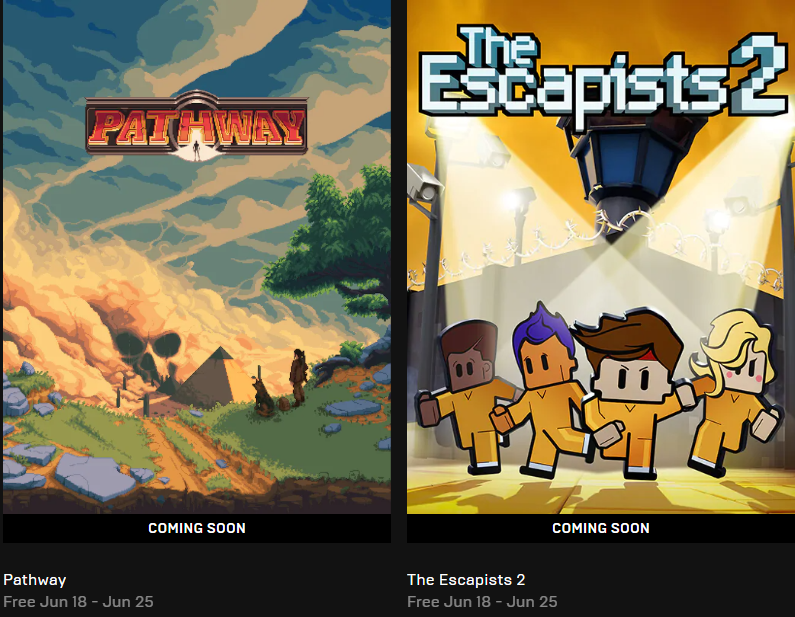 The first Epic Games Store freebie for this week, The Escapists 2, is a pretty good prison break sim. You start as a new inmate with the sole goal of escaping the prison you’re in, in any way possible. You can design articulate escape plans and then spend weeks perfecting them. The game comes with lots of different prisons to escape from and it also offers a multiplayer mode to try getting out with your friends. And when you master every prison in the game you can build your own inescapable prison thanks to the complex level editor.

The second Epic Games Store freebie ,Pathway, is another indie title with cute 2D visuals. Instead of simulating a prison escape, this is an adventure game with multiple strategic layers. The game takes place during the 1930s and is set in Africa. It includes lots of exploration along with fights against Nazis in the true Indiana Jones fashion. Once you stumble onto enemies the game turns into a turn-based strategy that offers X-COM lite combat that’s challenging but relatively simple. Visuals are great, exploration is also pretty good and the combat can be fun at times. Overall, the two games offered this week for free on the Epic Games Store are pretty good and deserve your attention if you like immersive sims or turn-based combat.