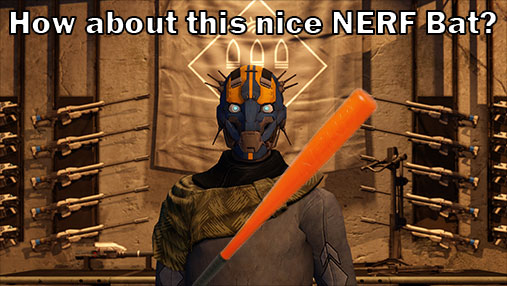 We all knew this day was coming, but we kind of hoped that Bungie was too busy bathing in the sea of money they made from Destiny to remember fixing such an opportunus exploit. Famous Treasure cave in Skywatch has been nerfed with yesterday’s hotfix. Bungie says that, although they appreciate the tenacity with which some players spent hours looking at a black hole of a cave shooting enemies for legendary and exotic gear, this is not the way they envisioned their game to be played. To alleviate the problem caused by fast respawn timers they increased them from 6-10 seconds to 40 seconds for each cave that had this problem. Sorry guys, no more farming there, but we are already preparing a guide for alternatives so stay tuned.

Bungie also decided to take all the joy out of the Queen’s Wrath event story farming by removing Ascendant Shards as loot for deconstructing Legendary gear you get as reward for finishing Queen’s Kill Order missions. No more free end game materials for you guardians. You have to endlessly farm daily story missions and Vault of Glass raid, as Bungie intended.

They also removed loot after a hard wipe in a Strike. It seems that chance of engram loot was higher if you hard wipe in a strike (for example in Nexus Strike where people farmed those Goblins for engrams). This loot removal is very short term, but it should prevent further farming attempts in strikes.