Annapurna Interactive is known for its unique selection of games. The last game they are publishing that impressed us was Stray, a next-gen title about a cat trying to escape a town full of robots. Talk about unique. The newest title that caught the eye of the prominent indie publisher is The Artful Escape, a surreal tale of a guitar prodigy who doesn’t know that he will soon experience the journey of a lifetime. The game starts as a regular adventure/2D platformer but soon after the prologue the game reaches psychedelic heights and it stays there. 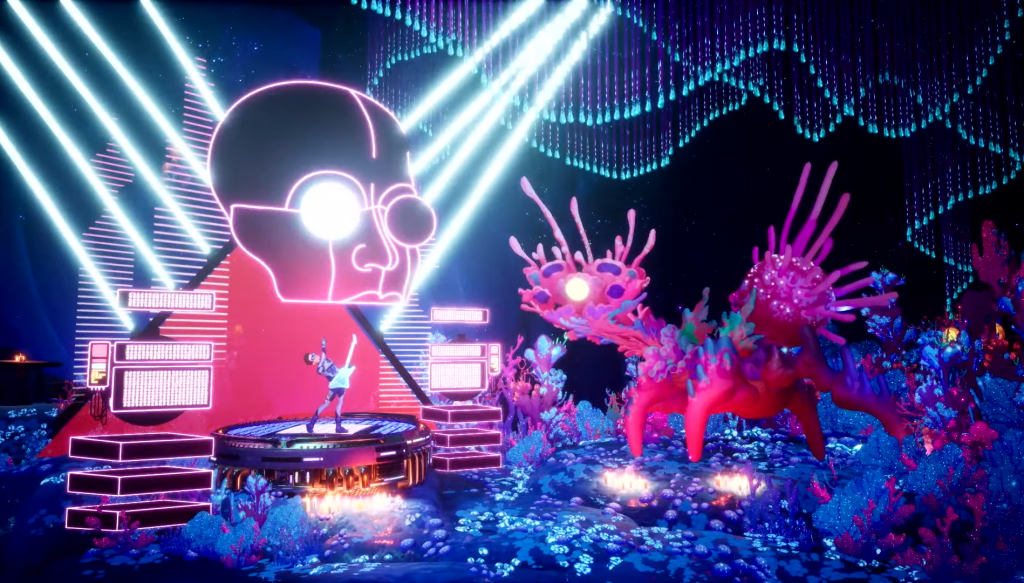 The walkthrough video, which you can see below, sees Beethoven & Dinosaur, the studio behind The Artful Escape, explaining to us the game, its world, its characters, and its unique gameplay. The start of the game takes place in Calypso, Colorado, the hometown of the game’s hero, Francis Vendetti. Francis knows his way around the guitar but is still miles away from the masterful level of guitar skill wielded by his uncle, Jonson Vendetti, a sort of Bob Dylan in the world of The Artful Escape.

The legacy of his uncle combined with the stress of his first ever live gig leads Francis to travel to other worlds in the search for his stage persona. During this journey, he meets a bunch of weird figures and travels through a bunch of bizarre worlds. He interacts with those worlds and their inhabitants with his guitar. The gameplay in The Artful Escape revolves around hitting various riffs and licks with the guitar, which allows Francis to perform different moves.

He can run, jump, hover in the air, and more. Playing riffs can also wake up flora and fauna found in the levels. Plants and animals can move in the rhythm of the guitar, and Francis can also play it to wake up and talk to important NPCs. When it comes to visuals, the game looks surreal, with LSD-trip like creatures and lush environments with richly saturated colors. And yes, the music is pretty cool. The game is coming “soon” to PC, Xbox One, and Apple Arcade.

NEXT POSTHades Blood Price Update Adds More of Everything