Several days ago, tinyBuild accused G2A of fostering a grey market in which credit card thieves could launder their ill-gotten money. The feud continues as G2A responds with a press release, trying to deflect questions and shift blame, to which tinyBuild offers what they consider genuine solutions. 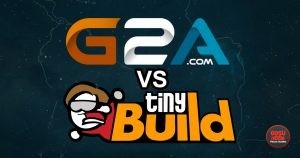 You can read G2A’s full press release here, but the gist of it is:

All G2A asked, was to cooperate with tinyBuild to rectify the issue, which is the list of the keys they deemed without any verification, as stolen. Only then can G2A compare these keys against the confidential G2A marketplace database and report those findings back to tinyBuild. Unfortunately tinyBuild never came back with the answers to resolve the issue.

They go on about how the value of the tinyBuild’s games sold on the marketplace was overestimated, emphasizing once again that they are a marketplace where people gather to sell their goods, not a shop. Another curious bit is when they try to steer the conversation towards the question why the publisher decided not to share the list of keys with them. The text ends in a quite peculiar way, asking tinyBuild to provide a list of keys they suspect are stolen within three days, which only adds fuel to the fire.

Alex Nichiporchik promptly responded to their press release with an update to his original blog post. Naturally, the reason they don’t want to hand over a list of keys to G2A is that they can’t be certain which ones really were fraudulently obtained, and he fears that G2A would only resell the keys. It would take a lot of time and effort to sift out the stolen from the proper ones, more than the company can afford.

Instead, he offers three ways G2A could remedy the situation and make the marketplace a more developer-friendly environment:G2A has yet to respond to tinyBuild’s propositions.