One of the things Peril on Gorgon adds to Outer Worlds are new weapons. There’s a bunch of new boomsticks you can get, including three unique science weapons – the P.E.T, Special Delivery and Employee Benefits. This guide is going to show you where to find new weapon locations in Peril on Gorgon Outer Worlds DLC, as well as what they do.

The P.E.T can be found in the Secret Hideout at Gorgon Canyon. It’s a bunker with a weird lock that’s hidden in a cave north of the bridge east from the OCI Lower Interior fast travel point. In order to get inside, you’ll have to answer a bunch of questions correctly. The best way to get the answers is by playing through the quest A Dialogue Between Dead Men. It’s a melee weapon whose power attack pulls enemies towards you.

You can find the Special Delivery in the Marauder Stronghold in the southeast of Gorgon Canyon. Go to the central area, where the Marauder Colossus is, and look for an enemy called Charles from Accounting. Kill or pickpocket him to get the gun. It’s a rocket launcher that fires a cluster of homing missiles.

Employee Benefits – how to get

Employee Benefits can be found in the laboratory at the Olympus Orbital Pharmaceutial Station, during the Man in High Orbit main quest. You’ll find it on an NPC called Dr Jasper Low. It’s a tiny handgun that heals whoever you shoot with its beam.

You can find Doctor’s Orders in the Ambrose Mansion. Before you enter, head into the groundskeeper’s shack and get the kitchen keycard from the shelf on the right.

Then head into the kitchen and go into the service tunnel and follow it to Olivia Ambrose’s office. You’ll find the master bedroom keycard on her desk.

The master bedroom is on the other side of the same floor. Once you’re inside, you’ll find the pistol on the dresser. 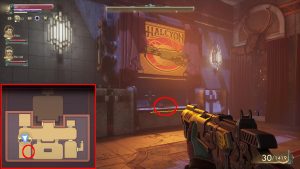 We’ll update the guide with more weapons as soon as we find them.