What are the best heroes for Overwatch 2 ranked? What is the ranked meta in Overwatch 2? The sequel to the highly popular hero shooter is finally here and after quite a few problems at launch, it seems that the game now works just fine. And that means it’s time for us to take a look at the game itself. If you want to dominate in the first season of Overwatch 2, you will probably want to know which heroes are the most overpowered right now in OW2. And for that, you’ve come to the right place! In our guide, we present the Overwatch 2 hero tier list, with every character ranked from best to worst. 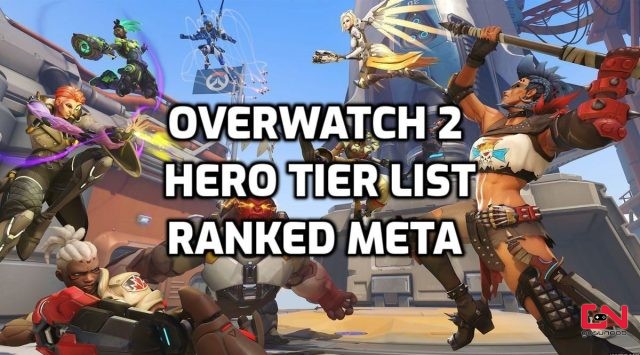 Before we jump to our OW2 character tier list, a little disclaimer is due. While we believe that our tier list is highly accurate, at the end of the day, there are a lot of factors which decide which heroes are objectively good or bad. The game has just been released and it comes with a lot of gameplay changes. There’s no doubt that the meta will fluctuate constantly over the next few weeks until everyone figures out what works and what does not. Furthermore, some heroes work better on specific maps or map types. Some shine in one hero composition while others are useless in another. Finally, there’s the subjective part. You will simply play better with some heroes whose design suits best your personal playstyle and preferences. Now, with that out of the way, let’s get right into our tier list:

With a switch to a 5v5 format, we firmly believe that dive comps are going to dominate the meta. There will be much more opportunities for flanking and diving. Thus, divers and heroes who can support them are going to reign. Genji and Kiriko will be the absolute best picks in the early OW2 meta. Especially now when stuns are basically removed from the game. With her “Protection Suzu”, Kiriko will enable some insane dive action in well-coordinated teams. In general, mobility heroes will fare well in Season 1, and that’s why we have Lucio on top as well. UPDATE: We’ve added Reinhardt to our S tier of heroes, as Blizzard recently confirmed that he is a tank with the highest win rate in the game. And who are we to go against win rates?

While not the absolute best of the best, our A Tier is where you will find the core of many teams. Heroes in this tier can further support the diving and flanking strategies and bully the less mobile backline enemy heroes. Heroes like D.Va and Tracer will wreak havoc and cause disorder within enemy teams. Sombra’s disruption and infiltration tools will be a headache in the new format as well. Zarya’s barriers will further enable divers for safer in-and-out takeouts. While not the perfect diving tank, Brigitte will also work well in comps that like to push forward.

We thought hard about putting Baptiste into a higher tier as he now has better damage and good survivability, which would help him to stand on his own in a fight. In general, heroes in this tier are quite good. It’s just that they are not well-optimized for what we think will be the current meta. Most of them, like Hanzo, Widowmaker, and Torbjorn, work great in more static engagements, with clear frontlines and zoning. And the meta we predict will ensue will unfortunately not support that playstyle. Nonetheless, these are still great heroes, and if you are confident in playing them, be free to do so!

In this tier we have heroes that simply don’t work well as they used to, and they will need some buffs and reworks if we are to see them in the meta again. The once universally hated Junkrat has fallen off due to the changes in how the game plays out. Moira and Mercy in particular will need some changes as they are too static and slow to properly support in the Overwatch 2 meta. Bastion was one of the first heroes whose changes for OW2 were showcased, but we still think his kit is not adequately suited for the needs of the OW2 meta in these early weeks. Roadhog is a tank that excels against slow and static targets, and as we see, this meta will be anything but that.

Poor Symmetra. We don’t like it when we single out heroes, and it’s especially sad to see it in the bottom tier. But Symmetra simply doesn’t have what it takes to survive in the current state of the game. Not only that what she provides doesn’t work in the meta, but she’s also outmatched in almost any aspect of her kit by other heroes who are doing it better. Blizzard, so something for our Vishkar architect!