A new Ashe skin is coming to Overwatch, as part of Ashe’s Deadlock Challenge. The challenge will be starting very soon. This event was announced on the official Overwatch Twitter account yesterday. In that tweet, players could see Ashe’s silhouette – presumably in her new skin – as well as when it will take place, during a short teaser video clip. If it follows the same pattern as previous similar events, it will also last for several weeks, and players will need to fulfil objectives such as winning nine games. When they do, they will then likely be able to unlock this Legendary new skin. Read on to see when this New Ashe Skin Overwatch – Ashe’s Deadlock Challenge will take place. 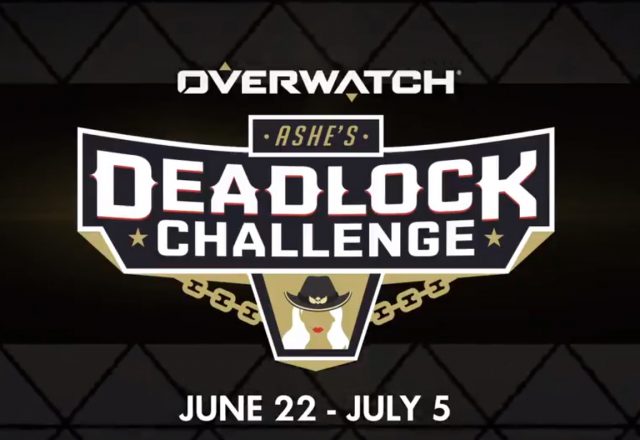 When Will The Ashe’s Deadlock Challenge Take Place?

This challenge will begin June 22nd and last until July 5th. Right now, we can only speculate, but besides this skin, players will also probably be able to unlock other cosmetics as well, such as a spray and player icon. To get these, players will most likely need to play the game during that period. Ashe was introduced to Overwatch near the end of 2018. The eight new Hero added to the game since it was first released, Ashe soon became a popular Hero character. Very powerful and effective at mid-to-long range, Ashe wield her trusty semi-automatic Viper gun. Besides her sharpshooting skill, she can also throw Dynamite, and fire her Coach Gun. For her Ultimate, she can summon her omnic sidekick – B.O.B. This big robot will then charge in to knock over all the enemies in his path and after that fire from his hand cannons – as if he were a turret. B.O.B. will also be getting a new skin.

More information concerning Ashe’s Deadlock Challenge will no doubt be released as the event draws near. Good luck to everyone participating and we hope that you will enjoy playing with your new Ashe Skin.

My house, my rules.