Persona 5 has a lot of DLC costumes and items on offer. Some of them are free, others have a price tag. There’s some confusion about where you can find these in the game, once you’ve downloaded the add-on. In this guide, we’re going to show you how to get DLC items in Persona 5. 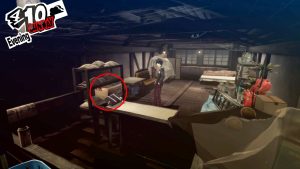 First of all, make sure you’ve downloaded all the DLCs you own. You won’t be able to access your stuff until you’ve settled in at Cafe Leblanc. When you first enter the room above the cafe, where the protagonist will be staying, you’ll see a carboard box on the floor. It’s marked “storage”, and contains all your stuff. As soon as you clean up the room, it’ll end up on the lowest shelf between the stairs and the sofa.

This is where you’ll find your DLC items, in the unassuming, soggy cardboard box. Keep in mind that skill cards might not be available before you progress through the story enough, but costumes should appear as soon as you grab the DLC. Since these items can be sold for profit (the soma goes for 50 thousand yen, for example), make sure you don’t sell the ones you paid real money for/intend to actually use.

Of course, this applies only to the in-game DLC items. If you’ve bought themes or avatars, you’ll find them in their usual place on your Playstation dashboard. There are several packs that add new background music to the game (mainly soundtracks of older titles from the series) – we don’t know how they are accessed, but we’ll update this guide once we find out.