Pokemon GO has a new holiday event, and it’s live as I type this article. For a limited time around Christmas, you can catch a special Pikachu. As if Pika wasn’t adorable enough, they’ve put a Santa hat on him. Here’s what we know about the Pokemon GO limited edition Pikachu with Christmas hat event. 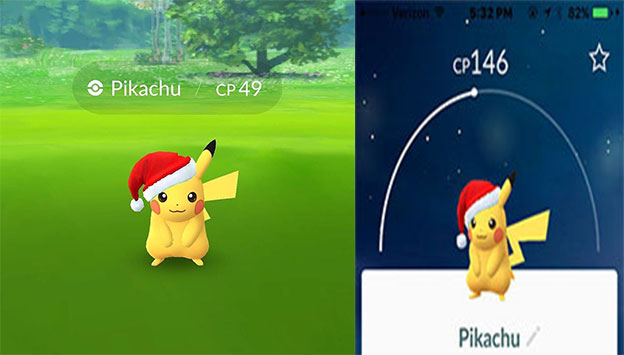 Christmas is just around the corner, and Niantic have some Yuletide presents for us. We got Gen 2 Pokemon in PoGO – Pichu and Togepi, the first of many to come. But, that’s not all. There’s also the Christmas Pikachu event.

Trainers now have the chance to catch a special edition of Pikachu wearing a Santa hat. The event began on December 12th, and it will last until 10 A.M. PST, on the 29th of December. Trainers are also encouraged to use the AR option, take pictures of the festive Pikachu, and share them using #HolidayPikachu.

Here’s the official statement from Niantic:

We also have another special treat for you. Starting later today through December 29, 2016, 10:00 A.M. PST, you’ll find limited edition Pikachu all over the world. These Pikachu will be wearing a festive hat to celebrate the season! Use the Pokémon GO AR camera when you encounter them in the wild to take their picture and share it with us using #HolidayPikachu.

Apparently, there’s also an Easter egg in this Christmas event. Some trainers have, it seems, already managed to evolve their Pika Claus. If you do that, you’ll get a Raichu wearing the same hat. Admittedly, it’s not quite as heart-melting as Pikachu in the hat, but it’s still a cool little feature.

Don’t even pretend that you don’t want Pikachu in a Santa hat. Get out there, enjoy the winter weather, and keep an eye open for Pika Claus!