Can you transfer Hoopa Unbound in Pokemon GO? Pokemon GO developer Niantic has just announced a new type of Raid – Elite Raids! These special raids come with a new kind of Raid Eggs which can only appear in EX Gyms. And the very first monster to be featured in Elite Raids is Hoopa Unbound. When you group up and defeat Hoopa, you will earn an opportunity to catch it. In addition to other rewards, of course. However, what trainers want to know is – can you transfer Hoopa from Elite Raids via Pokemon Home? Read on to find out. 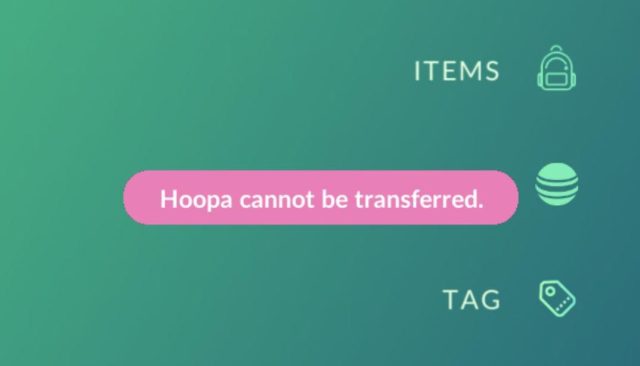 How to Transfer Hoopa Unbound in Pokemon GO

Can You Transfer Hoopa Unbound in Pokemon GO

If you were hoping to use Pokemon Home to transfer your newly caught Hoopa Unbound, you might be disappointed to see a message that reads: “Hoopa cannot be transferred.” Why is that so? Well, it’s because alternate forms of Pokemon aren’t transferable to Pokemon Home either from Pokemon GO nor from any other Pokemon game. And, well, the “Unbound” is an alternative version of Hoopa. However, this can be bypassed.

A workaround for this is to simply change its form to Hoopa Confined. However, in order to do this, you will need to have the form change unlocked. And for that, you will need to have the original special research for Hoopa completed. If you haven’t done that, unfortunately, you’ll have to wait for another event where Niantic will release the Hoopa special research. So there you have it, that’s the only way to transfer Hoopa from your Pokemon GO storage to Pokemon Home.

A glimmer of hope in the current situation is that many players are frustrated with the situation as they have a bunch of Hoopa occupying the storage. This can maybe prompt Niantic to soon release the Hoopa special research again in order for players to unlock the form change feature, which will allow them to transfer Hoopa to Pokemon Home.