Being one of the oldest Pokemon around (introduced all the way back in Generation I), it’s no wonder that Scyther is also in Pokemon Legends: Arceus as well. This iconic Flying/Bug dual-type usually evolves into Scizor. However, in the Hisui region, where PLA is set, it will instead evolve into a completely other Pokemon – Kleavor. This process isn’t as straightforward as it is for some other Pokemon. And, of course, to evolve Scyther, you will need to find and catch one first. In this Evolve Scyther to Kleavor Pokemon Legends Arceus guide, we will explain both how to evolve it and where you can encounter Scyther. 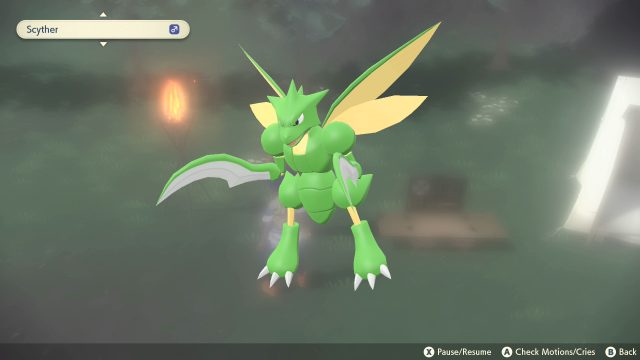 How to Evolve Scyther to Kleavor in Pokemon Legends Arceus

In order to evolve Scyther into Kleavor, you will first need to locate and capture a Scyther. We managed to come across several Scythers in the Obsidian Fieldlands map. More specifically, in the Grandtree Arena location there. We have marked this spot on the screenshot down below. Be careful when battling it, as Scyther is a very powerful combatant. It is weak to Flying, Fire, Electric, Ice, and especially to Rock moves, so use these against it.

Now that you have caught a Scyther, the next step is to evolve it into Kleavor. In previous entries, Scyther evolved into Scizor when it was traded while also holding a Metal Coat. However, this process is different in Pokemon Legends: Arceus, as Scyther evolves into Kleavor instead. To do this, you will need to get ahold of another item. Namely, a Black Augurite. To get this item, you will need to find and battle Gravelers. When defeated a Graveler will occasionally drop this item. They are pretty common throughout the game, so you shouldn’t have too much problem getting a Black Augurite. When you do, select it in your inventory and then use it on Scyther to get it to evolve into Kleavor.