Where to find Articuno in Pokemon Let’s Go?

Articuno is hiding out in a cave in the Seafoam Islands, the place in the southwest of the map, on the road between Fuchsia City and Cinnabar Island. You’ll be able to enter the cave as soon as you have the Sea Skim secret technique, but in order to get to where the legendary bird is, you’ll also have to get the Strong Push secret technique.

When you enter the cave, go all the way down to the 4th floor using the ladders. Once you’re there, jump into the water and the current will take you to another room. Go onto dry land again and head left. Go up the first ladder you find, and you’ll end up on the 3rd floor. Follow the path down until you reach four stone slabs. You need to push two of these slabs into the holes in the ground, so that you stop the strong current on the 4th floor.

Using the numbering on the image above, push slab #1 into the hole on the left. Push slab #2 to the left, so it’s out of the way. Now push slab #3 up twice, so it’s in the corner. Get above slab #4 and push it down twice, then left until it’s above the hole, then down. 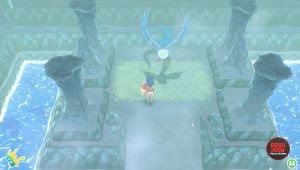 Once you go back to the 4th floor, you’ll be able to use your surf board on the pond on the left, which is how you’ll reach the island where Articuno is. After you’ve defeated him in combat (we just spammed Pikachu’s lightning abilities), you’ll have to catch him using a pokeball. When you catch him, he’ll be level 50, no matter what level you are.

NEXT POSTPokemon Let’s Go Moltres Legendary Bird – How to Get