Zapdos is one of the few legendary pokemon in Pokemon Let’s Go. It’s a legendary electric bird, a unique pokemon that you can find only in one particular spot. You’ll first have to unlock two secret techniques, which will allow you to approach the power plant where the bird is hiding. If you get stuck while looking for it, this guide will show you where to find Zapdos in Pokemon Let’s Go.

How to get Zapdos in Pokemon Let’s Go?

Zapdos is reigning in the Power Plant, a secret location off Route 10. In order to get there, you’ll need to have Chop Down and Sea Skim, the secret techniques that allow you to cut bushes and surf across water. Once you have them, go to Cerulean City.

Head to the southeastern part of town. When you’re in front of the store, you’ll see a sapling between the fence and the hedge on the south side of the street. Cut it down and follow the road. It will lead you to Route 9. Head east until you reach Route 10 – you’ll notice the popup at the bottom of the screen, and the river to the north. Approach the water and use your surfing board to follow it. When you reach the end, go back to dry land and you’ll end up in front of the Power Plant.

Once inside, simply follow the corridors until you reach Zapdos. Somewhat surprisingly, we managed to beat it with a couple of thunder attacks from Pikachu. After the fight is over, you’ll still have to capture it, so make sure you use a high quality ball. If you fail to catch it, it’ll only respawn once you’ve beaten the Elite Four, which might be a long ways away. 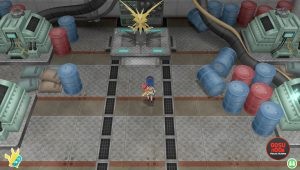