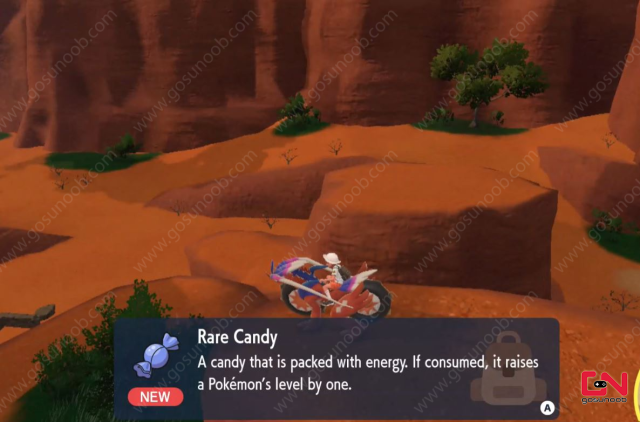 Where to Find Rare Candy in Pokemon Scarlet and Violet

Like in all other Pokemon games, Rare Candy in Pokemon Scarlet and Violet raises a Pokemon’s level by 1 when used. It will add just enough Experience Points (XP) needed for your Pokemon to level up to the next level. Because of that, it’s best used on a Pokemon which has just levelled up, as you will maximize its value, and gain the maximum amount of XP. In addition, it will also increase Pokemon’s friendship by a small amount. Finally, since Pokemon Sword and Shield, it will evolve any Level 100 Pokemon that evolves by levelling up. So, where to find Rare Candy in Pokemon Scarlet and Violet?

As the name suggests, they are quite rare. Thus, so far we’ve managed to find them in five locations. We found the first one in South Province Area Three. You will spot a Rare Candy on a small cliff protruding from a path leading uphill. Check our images below for the exact location. The second one we found was in South Province Area Five, near a Watch Tower in that region. There’s a narrow mountain cliffside path. You can jump on it from a plateau with the Watch Tower.

The third Rare Candy is hidden in the middle of the South Paldean Sea. There’s a small island there, and you can swim to it. There, you’ll find a Rare Candy, Pearl String, and Surf Water TM. The next one we’ve found is at the foot of the Watch Tower right between East Province Area One and the East Paldean Sea. And if you climb the Tower, you’ll find another one!

Finally, the fifth location and the 6th Rare Candy we’ve found are located to the northwest of Cascarrafa. You’ll spot it in some ruins in the northeastern part of the Asado Desert. For now, these are all locations we know of. You may check our images below for every one of them so that you can know exactly where to look.

The Salamence and Tyranitar Tera raid Pokemon Scarlet and Violet event is coming soon, so…

The Midnight Suns Child of Darkness Hunter legendary challenge is kinda tricky, which is why…

In Marvel’s Midnight Suns, one of the earliest tasks you will get is to find…