Well-established hard-core extraction shooters like Escape from Tarkov and Hunt: Showdown are riddled with cheaters. It would be a severe understatement to say that they only occasionally emerge from the woodwork. Nowadays, they publicly advertise their craft and wares, streaming and selling cheating software in the open, without repercussions. Cheaters are supremely annoying even in classic shooting multiplayer, where getting fragged affects only stats, but in the hard-core games with perishable loot, they often induce hair-pulling frustration. So every once in a while, it’s prudent to move on to something new, for sanity’s sake, if nothing else.

Marauders could be that something, at least for now, while the game is fresh and fraud-free. It recently entered the early access phase on Steam after a brief stint in closed beta. It has some exciting ideas, and it’s aimed at a little less hardboiled audience. The consequences of failure are still harsh, but the game’s complexity and learning curve are more manageable. For example, weapon management here is vastly simplified. Instead of gun-mod porn in Tarkov, here, at most, you can attach stock and suppressor, and many weapons are not moddable at all. Munitions management is also far less complicated – each caliber has only one type of ammo; reloading isn’t clip-based, etc. 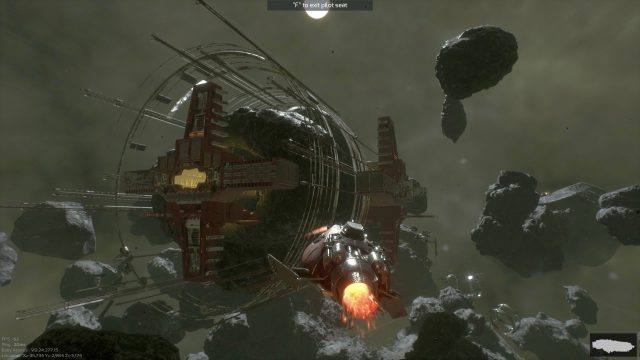 The world of Marauders is a freaky, diesel-punk version of the late XX century, where WWI never ended. The great war slowly consumed the Earth, forcing the remaining population to become exo-planetary. Humans settled in the Solar system, and the wild frontier became a breeding ground for piracy. You are one of those entrepreneurs, living a life of an opportunistic corsair, robbing space stations for anything that isn’t bolted down.

The game is roughly divided into three parts. Firstly, there’s the logistics section, where you can craft, trade, equip gear, accept and deliver quests, search for co-op partners, etc. Once you click on the raid button, either solo or in a group, you’ll move onto the second, space-transit phase. Transported into one of (randomly selected) five regions of space, you’ll pilot small spacecraft, aiming for the giant station in the center of the zone. This phase allows for space combat with other players sharing the same instance. You can blast their ships, even breach them, and try to steal them. If they drive something fancier than the default, free vessel, this could prove both lucrative and fun. Breaching requires stepping into an escape pod, which effectively abandons your ship when you are playing solo. For the full experience with Marauders, I definitely recommend grouping. 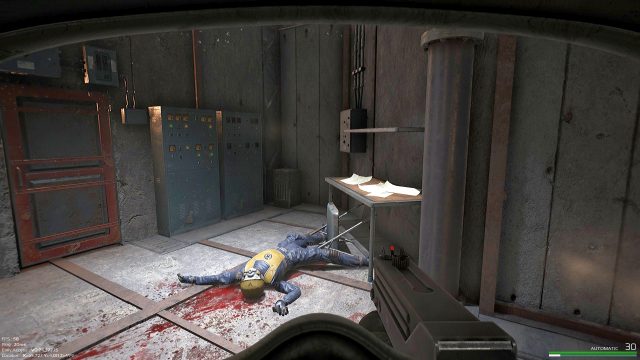 Navy outpost, Terraformer, Penal colony, damaged capital ship, general purpose space station… Once you dock onto one of the five locations, Marauders turns into Tarkov in space. Stations are vast, but their layout is not procedurally generated, so everyone will benefit from the experience. Besides other players, AI bots are scouring the halls, trying to ambush you. If you die, you lose all the currently equipped stuff, which will happen a lot until you learn the ropes. The hearing will be your greatest asset during the cat&mouse station chase. Most of the floor is metal, so footsteps will be the primary indication of someone’s lurking around. Time to kill is reasonably short, with headshots being especially deadly.

Unlike Tarkov, with its various status effects (deep wounds, fractures…), there’s only one type of HP loss in Marauders. You can treat it with food, drink, bandages, etc. Each wound lowers your permanent HP for the mission’s duration, but you can remedy that with aspirin. Speaking of duration, you only have twenty-three minutes worth of oxygen in every incursion, so there’s really no time for prolonged, tactical firefights or camping. Marauders is a smash & grab designed for the player with less time to spare than the average Tarkov enthusiast. 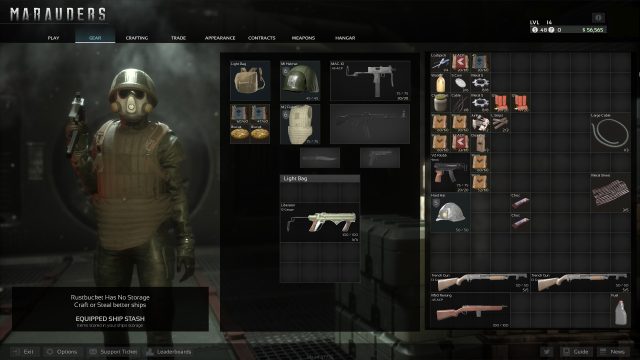 Marauders reward caution and punish recklessness. If you die, you’ll lose everything you had on you permanently. You can craft new equipment if you have resources or buy stuff from the vendors with 15-min rotating inventories. During the first few hours of the game, it helps if you do couple dozen naked runs. You’ll get a basic pistol, some ammo, and a utility pouch for free in the default ship, so you’ll have a fighting chance against bots. Once you dispatch some, you can grab their stuff, hightail home and repair it. Or disassemble it for the resources. This game has many valuable recipes that cost money and leveling tokens to unlock. I recommend unlocking some bags as a first priority. Even if you are attempting naked runs, it helps if you have the means to bring back home more than a rifle or two.

Besides selling the loot, your primary method of earning will be daily quests. They yield a solid amount of money, reputation, and, sometimes, advanced gear. Accumulating reputation is beneficial in the long run, as every level with any particular faction gives you a discount with its vendor. Some equipment is locked by your level, but leveling up is relatively quick. Once you reach lvl. 40, you’ll get the option to Prestige, resetting progress but getting a prestige token. Those, among other things, enable buying permanent upgrades, such as bigger inventory space. 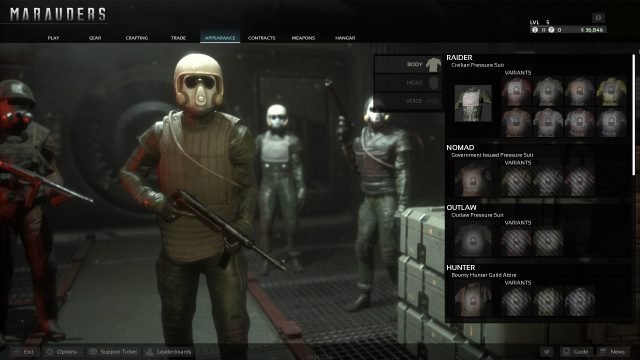 Marauders is a reasonably priced, fun extraction shooter with a smoother learning curve compared to similar games. Will that be enough to sustain it in the medium/long run? Sure, but that’s only one side of the coin of success. Another equally important side will be the pre-emption of the cheater problem and dealing with it when it inevitably emerges. I can’t stress this enough. Online shooters live and die on that principle, and Marauders won’t be an exception.