A whole year before Heroes of Might and Magic, one awesome game had set the gold standard for future turn-based fantasy strategies. Simtex’s Master of Magic (1994), published under the MicroProse label, was a complex 4X game that acted and improved upon the systems introduced in Sid Meier’s Civilization. It became an instant classic, competing with X-COM: UFO Defense in the global “Strategy game of the year” arena.

It inspired a throng of developers over the following decades, influencing, among many others, the development of Age of Wonders and Elemental: War of Magic. To say that it’s still remembered fondly today would be an understatement. It was only a matter of time (and license) before someone announced an official remake. 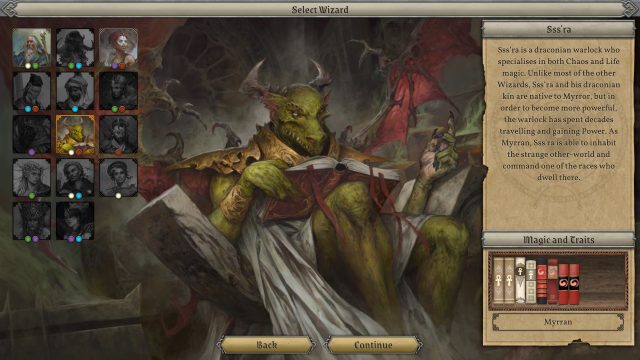 Master of Magic (2022) is being developed by MuHa Games, a Polish/British indie game studio, and published by Slitherine Ltd. MuHa guys recently made two very similar games, Thea: The Awakening and Thea 2: The Shattering. As far as we know, the original devs aren’t involved with the remake, so those young indies are on their own. Of all the courts of public opinion, The Court of Ancient Fandom™ is the most difficult to please.

We recently tried the preview version, feature complete and reasonably polished but limited to 100 turns and only a few playable wizards. This remake seems faithful to the original regarding the general concept and underlying systems, with modern visuals being the obvious exception. But “modern” is perhaps not an adequate word for a Unity game made by five people. Master of Magic doesn’t try to wow the player by being exceptionally pretty. Age of Wonders III (2014) looks far more expensive, for example. The looks, of course, aren’t everything. 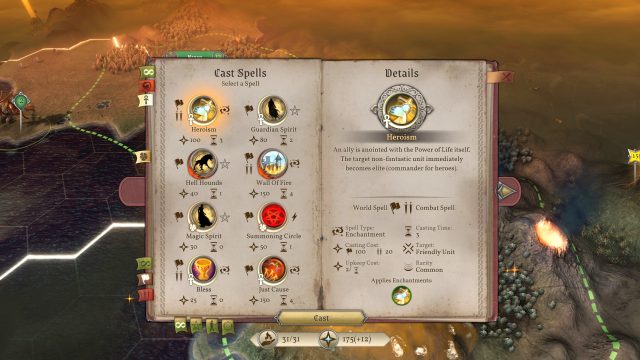 Like before, Master of Magic puts the player in the shoes of a powerful wizard competing for dominance with his/her peers. Those vary by the default race they lead and schools of magic they are initially proficient in. However, the differences between wizards get blurred during the game, as the leveling-up process is open-ended. We had a chance to see only the tiny part of it, as the demo was limited to hundred turns. For an epic scope game such as MoM, this was just a fraction of the campaign content.

The world is procedurally generated, consisting of two planes of existence, Arcanus, and Myrror, each with a distinct biome and indigenous fantasy races. From the pool of eighteen candidates, you’ll pick the one wizard that appeals to you, and off you go. You’ll begin with a single city to your name and the basic melee unit escorting the group of settlers. The landscape is dotted with dungeons, magic nodes, and other places of interest, but interacting with most requires at least a medium-sized army. So, in the beginning, you’ll mostly explore and queue the buildings in your starting city. 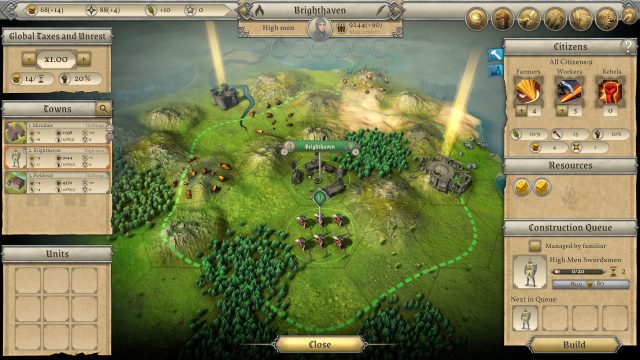 Master of Magic is a complex, turn-based game with many interconnected and overlapping systems. In the beginning, it more closely resembles Civilization than anything else. You’ll explore the terrain, decide where to expand, optimize the building queue in the city, and allocate the workforce. You’ll need to worry about the gold and food, as both are vital for fielding armies. A bit later, when you cautiously start to probe the dungeons and independent cities, mana will come into play.

Researching and casting spells are the core gameplay elements that work similarly to HoMM/AoW and similar games. There are more than two hundred different spells in the game, separated into five schools of magic. Each wizard has the starting arsenal of spells – the rest you can obtain by researching and dungeoneering. Some spells are combat-specific, and some are castable in the strategic phase. Depending on the complexity, strategic spells might take several turns to complete. One of the victory conditions is casting the Spell of Mastery, but the road to such advanced magic is difficult. Conquering the whole map might be easier for some people.

Halflings vs. Draconians vs. High Men 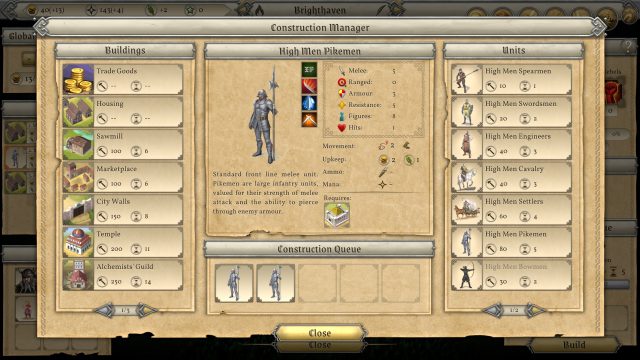 Combat is a classic, hex-based affair, with a small contingent of troops on each side. Most races have the same basic units, such as swordsman and spearman, differentiating only at the later tiers. This lack of true diversity sucks, as practically, there aren’t too many differences between Halflings and Draconians. Yes, the original game worked the same way, but I’m sure no one expects a 1/1 carbon copy in 2022. You can automate battles on the strategy screen, calculating the outcome depending on the force disposition. There is even an option to automate combat even if you started the manual fight by toggling the “auto” switch. This is particularly useful for the mop-up phases; you cleared the map of melee units, and instead of chasing ranged skirmishers who avoid close combat, you’ll automate the boring finale.

Besides regular units, you can also hire heroes. They participate in combat and can be killed as any other unit, but you can augment them with weapons and trinkets. Both the regular units and heroes get experience with every battlefield success, so preserving experienced armies is paramount. 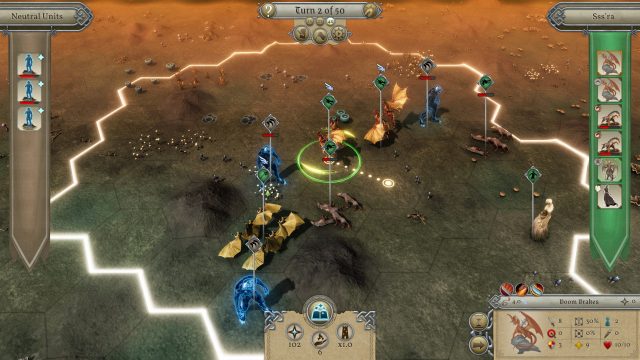 Remaking, or rather reimagining a legend like Master of Magic, is a thankless affair in eight of ten cases. Most of the fans of the original see the past through rose-tinted glasses and will dismiss your efforts no matter what. You’ll try to please those by staying true to tradition, risking alienating the people who expect innovation. Finding the balance between the old and the new requires clairvoyance and experience, qualities in a much shorter supply than development funds.

Master of Magic (2022) treads that line with caution. Too big of caution, we might add. MuHa guys need a bit bolder approach to redesigning the legacy systems. Most notably, they need to implement bigger differences between races, even if that risks unbalancing the game. The rest of the stuff is mostly fine, if unremarkable. The full game releases on December 13, so there’s still time for some quality fixes.