Not really, but if you are sufficiently bored with the classic multiplayer heavyweights everyone is playing these days and wouldn’t mind some alternative game with a decent player base, you could do worse than giving Scavengers a try. It is much too early to tell if the game will meaningfully catch on long term, but even in this early beta phase, there are enough players to facilitate rapid matchmaking at any time. A decent number of players during a workday morning is a good omen for the future – Amazon’s Crucible didn’t have that, and it died a swift, predictable death.

Scavengers is a free2play, 3rd person PvPvE multiplayer shooting/survival game rooted in battle royale and hero shooter ideas. It’s a loaded cocktail of concepts created for the people tired of mainstream juggernauts like Warzone or Fortnite. This medium-budget title only recently entered early access on Steam (also on Epic store), but apart from some balancing issues and technical hiccups unavoidable in this stage of the development, it offers a solid, enjoyable experience. 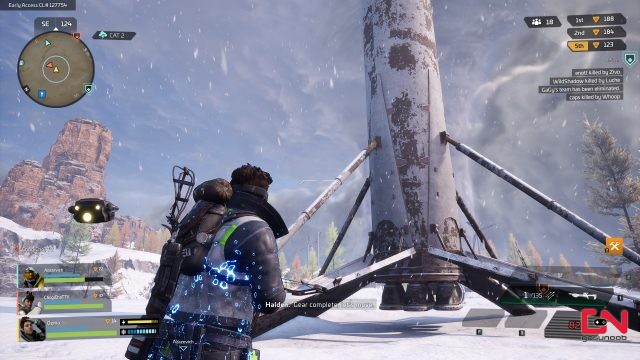 Like Apex Legends at launch, you can play Scavengers only as a part of a three-player squad. Nothing prevents you from going your way when the match starts, but the opposition that sticks together will soon weed out any solitary instincts you might have. You must coordinate (and communicate) if you wish to survive and prosper here – if you find that too much of a fuss, this is not your next multiplayer home.

Each team is a part of the expeditionary effort to our doomed Earth, made frozen and unhabitable because Moon suffered catastrophic asteroid impact and blew up like poor Praxis. Guided by Mother, female-voiced AI that tries too hard to emulate blabbing weirdness of GLaDOS, you and your random pals will need to fight or avoid other players and brave and survive series of PVE hazards – snowstorms, wild animals, mutants, and marauders stand between you and collection of valuable data, your primary objective. Like in most battle royale games, the playable zone will soon begin to shrink circularly, increasing the odds that you’ll encounter competing team(s) in the race for the finish line. 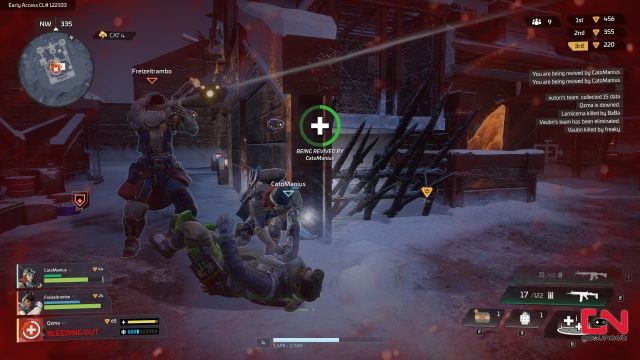 That „line“ is the dropship with unlimited passenger space and pretty generous lift-off countdown time, so in theory, everyone COULD complete the mission in peace. In practice, almost everybody will want the stuff you’ll drop when they drop you – the evacuee who bags the most data points receives a bonus prize from the Mother, so the greed always triggers big shootouts. The unpredictability of the mission finale will be the source of many grievances, as you could have a very successful and smooth run, only to lose most of your loot because some jerks had a three minutes headstart to prepare the ambush and murder your squad. Thankfully, you can bank the data during the mission, provided you make a detour to banking installation, which is not always convenient as you must outrun the deadly storm before thinking of anything else. 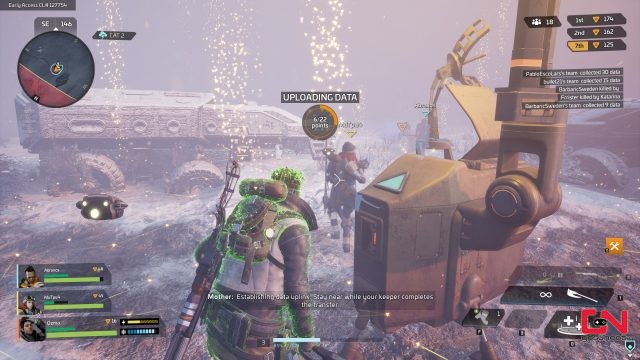 Open-ended gameplay is the best thing about Scavengers. You could decide to play by the book, clearing the NPC strongholds and collecting data; or you could rush to the middle of the shrinking map, trying to predict the probable spot for the dropship’s descent where you could focus fire on the people escaping the approaching storm who must run towards you (or freeze to death). It makes sense to always exploit any opportunity, like to jump people locked in the fight with elite NPC-s or wait for them in the path of the incoming storm. In that nasty respect, the game has a vibe similar to Hunt: Showdown. Besides the big, arena-shrinking storm, occasional mini-storms obscure everyone’s vision and reduce body temperature, requiring taking shelter to mitigate. Those mini-storms often coincide with the carnage around dropship, creating the very best mayhem that Scavengers can offer. 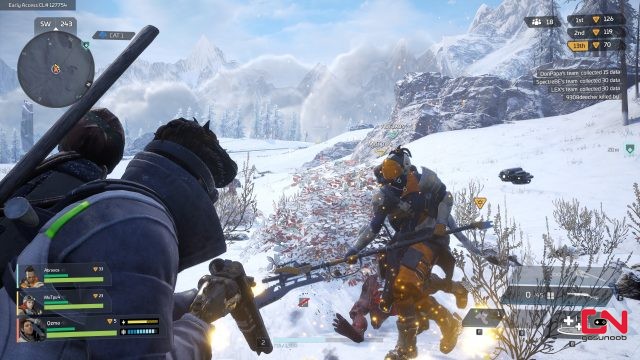 The game is called Scavengers because scavenging is the basis for almost everything in and outside of the missions. Between expeditions, you’ll have the opportunity to use resources you managed to bring home for researching new weapons, gadgets, consumables, and talents for your characters. That process is fairly quick at the beginning, but higher tiers evoke classic mobile timesink games – you’ll either wait for hours for automated research to complete, or you’d use a hard currency to finish it promptly. Real money will also be used to purchase tokens for unlocking additional heroes (you get three for free). Each hero has a distinctive, unique ability and a craftable signature weapon, but the arsenal you wield also depends on what you can find and craft during the mission.

Mid-match leveling and crafting are tightly interwoven with the research. When you start playing scavengers, you will have to rely on random loot for the weapons you’d use in the missions, but after several days of heavy R&D, you’ll have a personalized arsenal of weapons and consumables which will enable you to bypass the grind to some extent and focus, say, on hunting other players from the start. 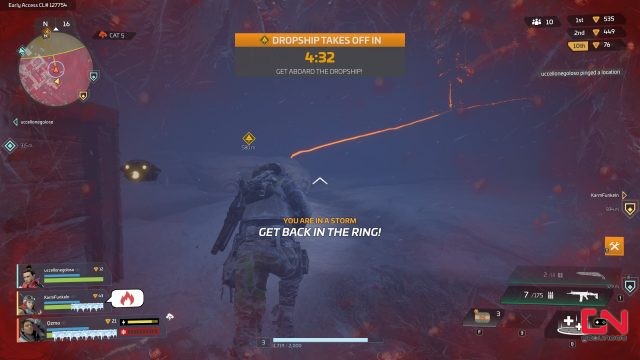 Scavengers is a promising new game that bravely tries to juggle a lot of stuff at once. If you are looking for the new multiplayer attraction, this could be it, but you must be willing to tolerate X more months of imbalance, potential server wipes, and other unpleasant surprises. Also, you must have realistic expectations about the future – Scavengers will never have multi-million dollar seasons with paid mainstream crossovers such as Nakatomi plaza. It is, and always will be, a clever niche game for a more limited audience.