As the years go by, it becomes evident that the video game medium is maturing in the same way movies have evolved. Real innovation becomes a true rarity in blockbusters, moving even further into the chaotic spawning pool of the independent scene. Sometimes, that motley chaos blurts out stuff that defies easy description. One of those artifacts is Card Shark, the game about cheating in card games for the purpose of uncovering the secrets that could bring down the French monarchy. It’s a part narrative adventure, part period drama, part reflex-based puzzle with plenty of QTE. It’s also giga-stylish, like an aquarelle painting animated in stop-motion technique. The game is one of a kind, and although it is not without flaws, it is definitely the most original title that came out in 2022. So far, at least. 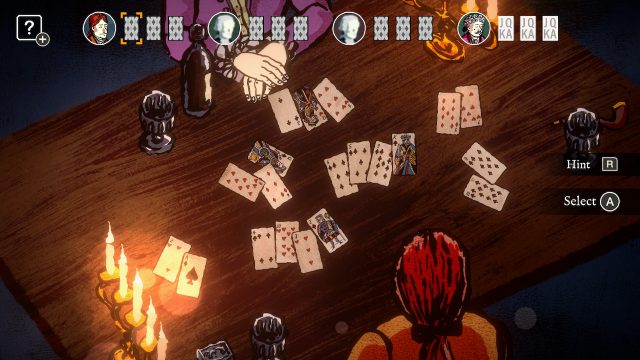 Set on the eve of the French Revolution in the late XVIII century, Card Shark puts you in the white stockings and buckled shoes of a young man suffering from mutism. The lad is working as a helping hand in a roadside inn, toiling under the yoke of the abusive mistress. His life will turn upside down after the fateful encounter with Comte de Saint-Germain. Legendary fake nobleman and con artist will take him under his wing and put him on a path of petty crime for a good cause. Together, they will roam the countryside, taking every opportunity to fleece gullible rich people in the various card games.

At the same time, Compte will slowly unveil the deeper agenda of their Tour de Swindle. He’s chasing the secret behind the royal marriage that can bring down the monarchy and unleash the new age. Card games, increasing in stakes, will serve as the ladder for climbing the social hierarchy needed for peeling the ever deeper layers of the conspiracy. Les Enfants Terribles vs Ancien Régime, allez! 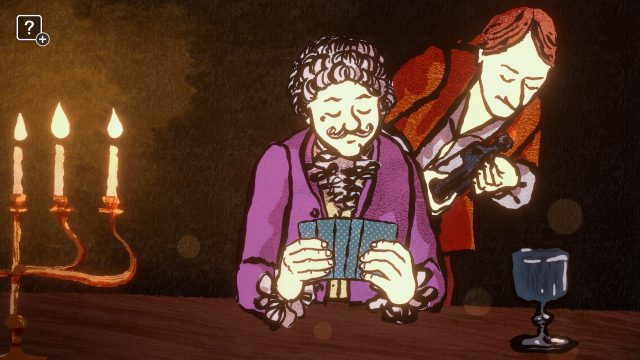 Card Shark is a card-cheating game that doesn’t require knowledge of specific card games or rules. You only need a basic understanding of four colors and the general value of cards as you play as a sidekick to the professional swindler who does the “heavy lifting”. Your job, as a helper/facilitator, is to fraudulently manipulate the game and stack the odds in favor of your mentor. Options for cheating are numerous and often related to the specific situation and/or the game being played.

You’ll mostly shuffle and deal the cards, using various tricks to put the boss in an advantageous position, such as ensuring he gets the highest value card in every dealing pass. You’ll also spy on your opponents, pouring the drinks and using gestures to signal their hand; or excusing yourself to another room, where you’ll switch decks, remove duplicate cards and stack the aces on top, among many other things.

To be a successful cheat, you need to be quick and perceptive, with pretty good short-term memory. Cheating in cards requires impeccable timing with directional moves with thumbstick and button presses. Memory requirement is even more strict. Removing the duplicate cards from the fake deck, you plan to slide on the table is one of those tense memory challenges. On top of all that, you are always pressed for time. Every game has a tension meter that shows your competitor’s agitation level. Allow it to reach the max, either by being too slow, clumsy, or both, and it’s game over. You’ll be accused of cheating, put to prison, and die. Death is, fortunately, not the end unless you decide to play on the max difficulty that turns the game into a roguelike. 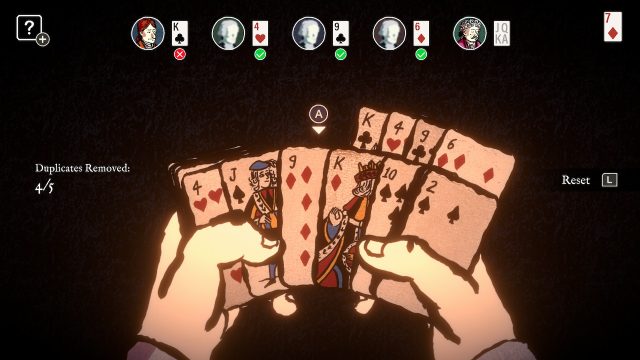 Card Shark is one of those rare games where I needed to lower the challenge to a minimum to prevent violent ragequits and despair. If you plan to play this one tired, after work or school, or during any mentally taxing period in life, don’t be ashamed to set the game to the “dilettante” level. Or at least enable hints in options – they massively help with memory challenges. The game breeds a specific kind of sweaty tension that can overwhelm you if you aren’t hundred percent there and aware.

One more important thing – Card Shark absolutely needs to be completed in continuity. Moves, combos, and timings are so specific here that muscle and eye memories are quickly dulled without practice. If you put the game aside for a few days, especially in the advanced phase, expect painful re-adjustment when you try to return to it. Imagine yourself as a real-life cheater who attempts to return to his trade after a stint in prison. Without a thorough refreshment course, you’d end up there again. 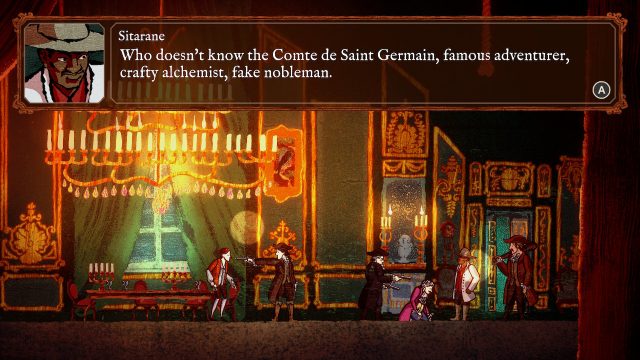 Besides cheating at cards, you will enjoy a well-written narrative full of historical characters like Voltaire. The plot you’ll be uncovering by systematically raising the odds is pretty solid, enabling this interactive period drama to shine on its own. The eye-pleasing visual aesthetic ties everything together like that ubiquitous rug from Big Lebowski. If games were to be judged by style alone, Card Shark would dominate the beauty contests in 2022.

Card Shark is definitely not a game for everyone. It requires lots of patience, uninterrupted practice, and, in places, almost superhuman mental agility and awareness. Many people will also be put off by the necessity to constantly learn new techniques. The game sometimes feels like an endless tutorial that pushes you to the brink at every turn. If you primarily play games for relaxation, this stress-generating engine will mess you up. But if you thrive on challenge, you’ll enjoy being eaten by Card Shark.

NEXT POSTThe Quarry QTE, How to Do Quick Time Events