When the Extinction gameplay trailer was first shown at E3 2017, it really piqued my interest. Fighting giant Ogres in fully-destructible environments, with civilians in jeopardy and hordes of minions to worry about, seemed like a good setting one doesn’t see too often. I started fantasizing about traversing giant monsters, trying to apply strategy to take them down while trying to keep the destruction levels to a minimum. Fast-forward to April 2018 and putting in some 15 hours into the final game, which was enough to finish its campaign and other activities, and I can’t help but feel like Extinction could have been much more.

You play as Avil, the last Sentinel and only person with the skill to fight the oncoming onslaught of giant Ogres called Ravenii. They are determined to wipe out humanity, and no army or fortress can stop them. That is where your sword and Sentinel training come into play. Together with Xandra, the brains of this operation, you begin the game attempting to contact the king and warn him of the danger his kingdom is in. The game tells its story through cartoon dialogues before each mission and several animated cutscenes spread throughout the campaign. These give insight into who the Sentinels are and why the Ravenii are attacking humans. The voiceover work is decent and the cutscenes are nicely animated, which helps you enjoy the story of the game. The downside is that it seems the developers artificially extended the story to add more missions. In the moment when you feel like the story is reaching its crescendo, things kind of reset, and you have to go through another 15 missions to reach the actual end, which feels out of place. Then again, if they ended the game at the natural place, you would be able to finish it in 7 hours. 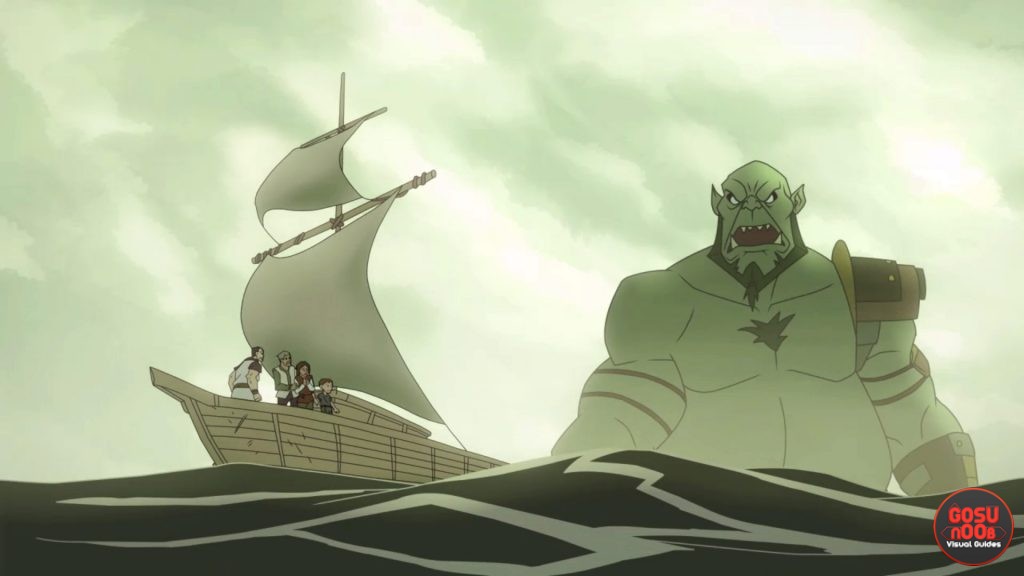 You didn’t come to play Extinction for the story though, but to kill giant monsters. The gameplay is what should be the driving force of this game. It revolves around you preventing giant Ravenii from destroying the city you are in. To kill a Ravenii, you will need to fill up your rune energy to the maximum, get up on top of the monster and, if you remove the armor around its neck, decapitate it. Rune energy can be obtained by saving civilians standing close to teleportation crystals all around the arena, by killing Ravenii minions that are attacking the civilians, and also by removing armor pieces on the Ravenii or severing their limbs. Each Ravenii can have leg, arm, shoulder and head armor pieces, and, as the game progresses, removing those armor pieces will require you to get rid of more complicated mechanisms. Just like in that trailer from E3, you will probably feel thrilled to scale the giant monsters and remove their limbs one by one, until you are able to get to its neck and perform the finishing move. The thrill will last for about two chapters. 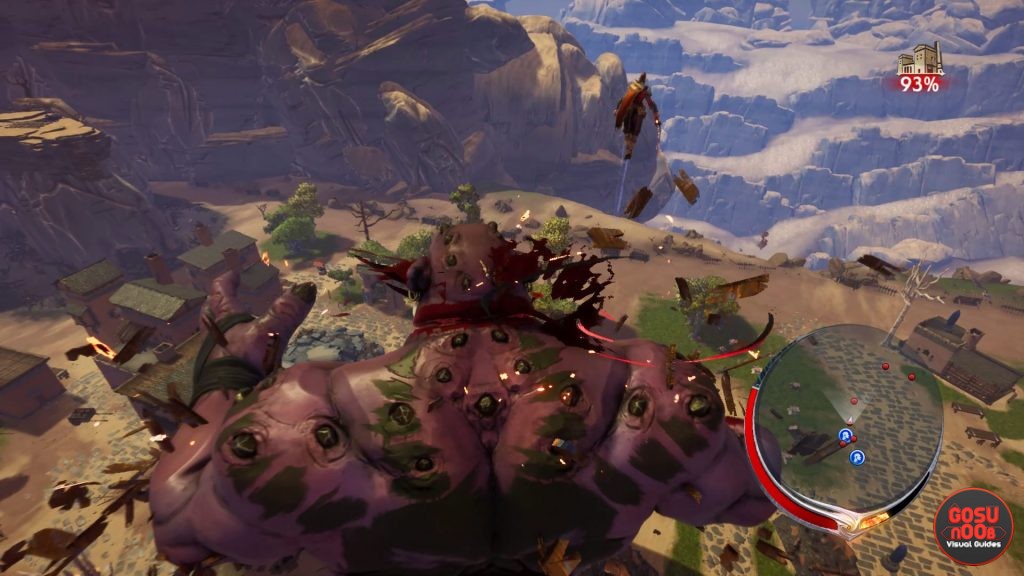 At about the 15th stage, you will realize that you are doing the same thing over and over and that nothing else will be happening in this game. Save citizens that stand still as the minions hack at them mercilessly. Run to the nearest Ravenii the moment it spawns and try and cut off its foot to prevent it from damaging too much of the city. Whether you will remove armor pieces in one hit, or two for the metal ones with locks on them, or four for the golden armor, it will always be the same process (there are other types of armor as well, but honestly, it all boils down to the same mechanic and what separates them is how annoying they are to remove). At one point, I stopped saving citizens altogether, because you can just farm rune energy by severing limbs off of a Ravenii until you charge up to kill it. 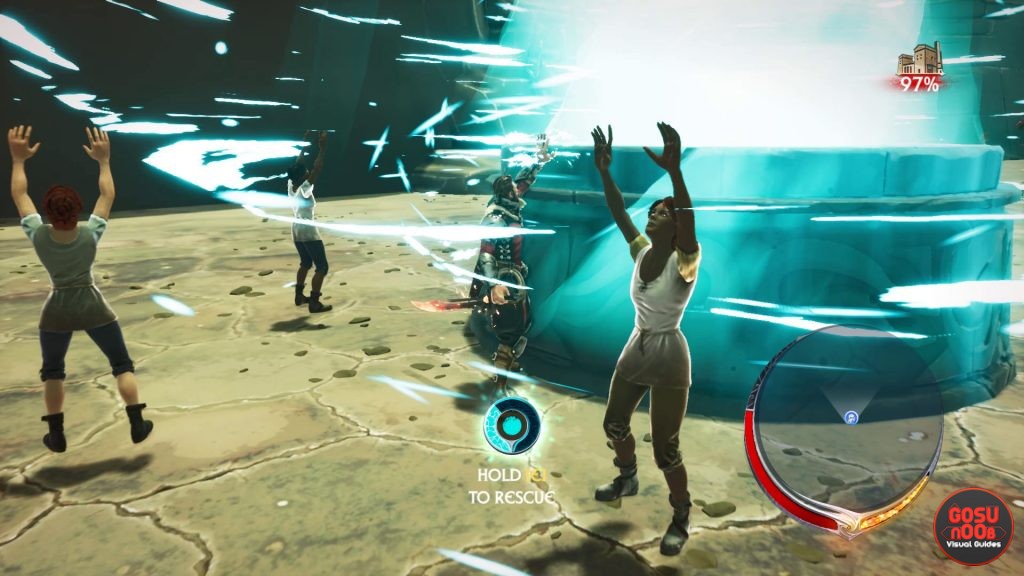 Actually, the game is filled with things you don’t really need or use. You character’s health means nothing, because upon death you just respawn and, if the Ravenii hits you, you will die in one hit. There are skills you can unlock, but I really didn’t feel much more powerful when getting them. The minions that attack civilians are plentiful, but you can avoid them completely, because the only time they play a role is when you have a task to kill a certain number of them. Besides, you can just hit them with your rune strikes without much danger. You have basic, advanced and expert attack moves, with different combos you can execute. They are never used during fights with Ravenii (which is 80% of the game), and they are probably going to be of some use only to people that will chase the highest of scores on the leaderboards. Arenas in which you fight have different layouts, but except for just a few of them, I did not notice much difference, and the way cities are laid out is inconsequential to the game. 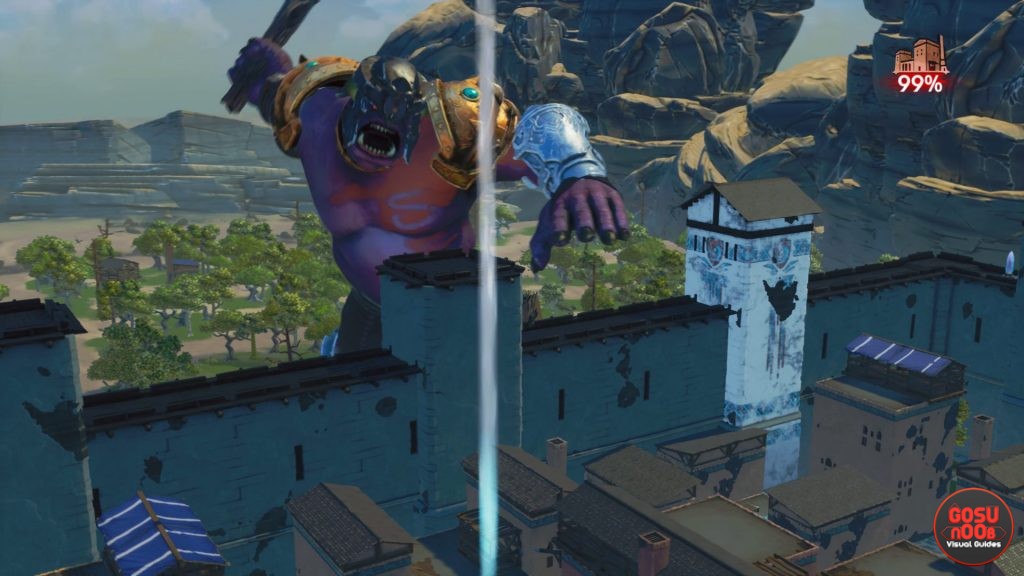 In short, you have several mechanics in the game that the developers have created, but provided no meaningful use for them. The only thing you will be doing is:

Technically, the game is passable. Graphics have that vanilla World of Warcraft feel to them, and everything runs smoothly on Ultra on a medium gaming rig. There were no game-breaking bugs or glitches. I played with a keyboard and mouse and felt that the controls were not as responsive as they should be, which was cause for much frustration, but I guess the developers expect more people to play this game with a controller. They did get the sense of scale right, and facing Ravenii is always a treat. If only there was anything else worth mentioning… 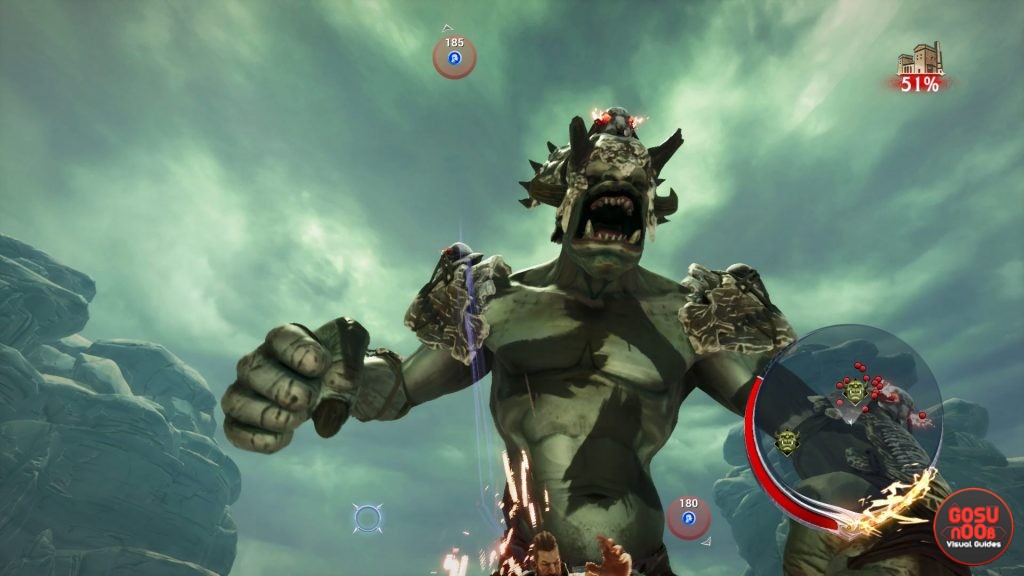 Extinction feels like a tech demo quite often. They had this good idea of having players fight giant monsters, created a random arena generator, and slapped on several other mechanics and half-baked ideas and decided to ship it like that. I can’t really see many people liking the game, and can find no justification for anyone to spend the $60 it will cost at launch. I feel like this could have been an awesome experience, but after playing through, I really can’t seem to find many redeeming qualities.