Fire Emblem Warriors: Three Hopes is an alternate-timeline spin-off to Fire Emblem: Three Houses (2019). It uses hack and slash combat mechanics similar to other Musou franchises such as Dynasty Warriors, but the spirit of its complex, turn-based predecessor, is very much alive. There is a rather deep meta-game camouflaged under the layer of colorful anime backdrop; It will slowly and systematically reveal one system after another until you feel positively overwhelmed. It will snare you in its mythos, plots, and characters, gobbling up your summer days. After you finally come on top of it, Three Hopes will offer an encore. And another one after that. 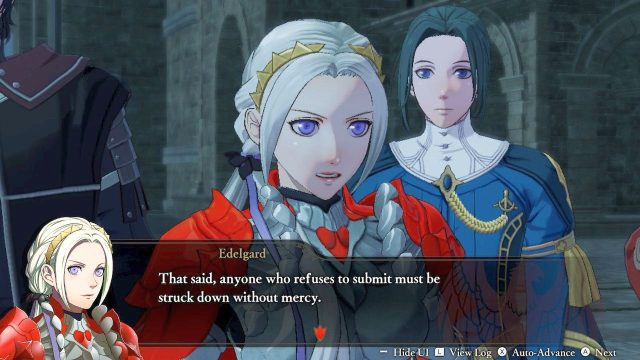 So, what about that alternative timeline? The continent of Fódlan, home of the three big, competing states, is up for grabs. Instead of Byleth, the protagonist from Three Houses, you’ll play as a mercenary named Shez, who will, essentially, provide the same service to the warring faction of their choosing. Good ol’ Byleth is still here, but now it carries a mantle of a bad guy (or girl), having destroyed Shez’s old unit and almost killed him in the prologue chapter. Revenge is a powerful driving force, and young Shez, paired with a mysterious spirit entity, will have to work hard to build up the strength for the final confrontation with their nemesis.

But first, you’ll have to choose between three big houses, which sets the story in their corresponding directions. Pledging your allegiance to one of them gives you a default roster of characters you can engage with and take on battles. Apart from a few key people, most of those guys and girls are expandable, provided you play the game in classic mode, where every combat knockout is fatal. If you are not a big fan of stress, there is a casual mode with far fewer fatal consequences of failure. You can pick up more people during the game, but that option is limited to specific actions taken in chapter-ending battles. 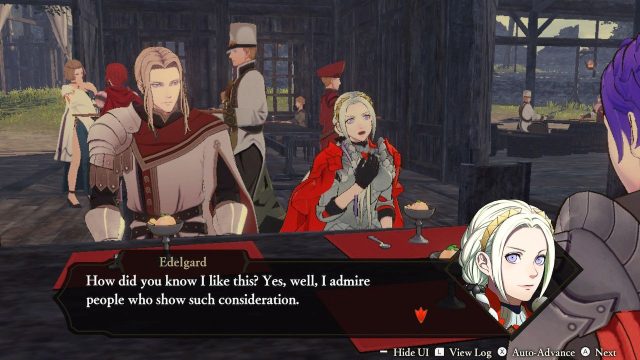 Fire Emblem Warriors: Three Hopes has a frankly ridiculous amount of characters and dialogue. Friendships you develop and deepen during the campaign have substantial gameplay implications, offering improved combat synergy and other benefits. Between fights, you can converse with everyone from your faction. You can train together, eat together, go on expeditions, and so on. Almost all significant dialogue exchanges are fully voiced. Production levels of Three Hopes are immensely rich compared to previous Fire Emblem titles.

All that interaction is not just menu-driven like in previous games. You now have access to a fully-fledged war camp with various vendors, training stations, and key people scattered around. You can explore it on foot or menu-warp around, opting for the static approach of old. You’ll spend a great deal of time here, managing resources and tweaking the classes and combat layouts of Shez and the core allies. You’ll also upgrade the buildings and facilities, unlocking new options, better vendor prices, and other benefits. 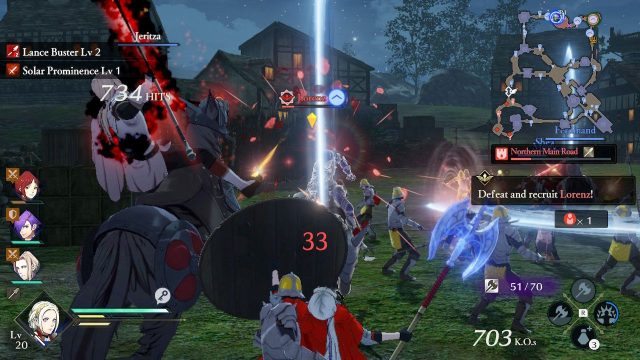 Combat is pure Musou extravaganza with all of the staples you expect from it. Powerful strikes send scores of enemies flying; over-the-top combos shatter the earth, a screaming soundtrack provides the insatiable tempo, etc. In the beginning, you’ll get the impression that success is achievable by pure button-mashing, which is mostly true for the first few hours or so. The difficulty slowly creeps, though, and pretty soon, you’ll need to start paying attention to many things. Most important are the people you bring into battles. Rotating everyone you have on call is just not practical due to diluting XP gain. Making a core group of heroes who complement each other is a much better long-term strategy.

Managing your squad in combat is key to good victories, grade-wise. Each class has counters and weaker counterparts, so the proper target assigning is the key to efficiency. Most late-game missions are pretty dynamic, with fresh objectives popping up all the time, so the tactical reaction time is also a significant factor. Situational awareness is doubly important while playing in classic mode, where the death of any character is permanent.

On the side of strategy, in each chapter, you can choose the next battle on the map. Your objective there is to carve a path to chapter-ending confrontation. In the interest of XP and loot, however, it’s best to clean up everything, including the optional battles inside every sub-zone. 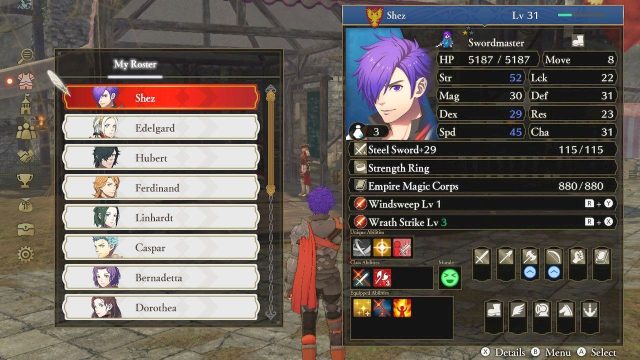 There are a couple of things I don’t like here. Constant interruptions during the first few hours, as the game introduces one system after another, are very annoying. Those systems are the potential problem – there are so many of them! Impatient players used to the relative “compactness” of previous games may find the game artificially bloated. Three Hopes can be overwhelming at times; there are no two ways about that. You need to be Zen and somewhat forgiving to enjoy the game properly.

Regarding the length of the campaign, expect to spend between 18 to 25 hours during the first pass. After that, you could play the game two more times to experience all three sides of the story. This will probably saturate your brain no matter how much you enjoy Musou. A better option is stretching the game throughout summer, taking the multi-week breaks between passes. Fire Emblem Warriors: Three Hopes is a gift that keeps giving, provided you don’t overgorge on it.