For most people familiar with 4X space games, Galactic Civilizations 4 represents a trek back in time. Stardock entertainment developed the core idea in 2006. and offered only incremental upgrades to the primary formula ever since. This turn-based galactic strategy has roots deep as Master of Orion, wearing the retro gameplay as the badge of honor. This was mostly OK until Galactic Civilizations III (2015), but mid-next year brought a significant game-changer. Stellaris completely changed the narrative in 4X space, exerting an influence that was impossible to ignore. Well, not impossible since Stardock chose to be oblivious to the undisputed champion of this complex genre. They covered their eyes and ears and spent several LALALALA years working on Galactic Civilizations 4. 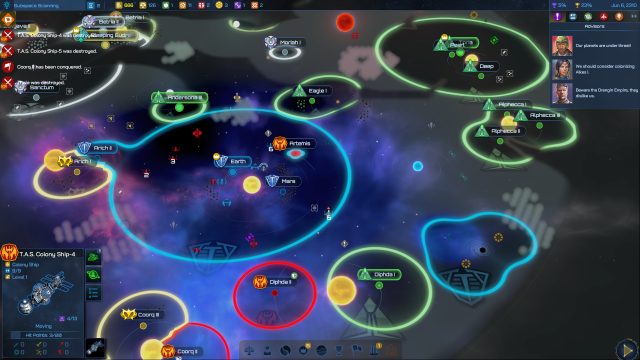 However, it would be unfair to label GalCiv 4 as wholly devoid of modernity. Stardock implemented some systemic improvements, cushioning the impact of progressively increasing manual workload during big games. GalCiv 4 is more ergonomic than previous games in the series. It also sports a modern engine, offering clean visuals and beautiful galactic vistas.

The game world now consists of sectors instead of a single big space map. In the pre-game setup, you can set the number and size of the starting one, which is a clever trick to break up the game into more easily manageable chunks. Sectors are connected via space lanes, locked until you research particular technology that opens them in the late early game. Since every sector has a limited number of connections to others, you can strategically place your fleets at those points. Even if the proper blockade is impossible, this can help prevent ingress to your territory. To some extent, at least.

Going wild with the number of sectors is not a good idea if your PC can’t handle it. The neat thing is the real-time hardware monitor that displays recommended CPU and RAM for the desired size of the galaxy. Like Stellaris, GalCiv 4 will primarily strain your CPU instead of GPU, and “Galactic “sized maps can easily choke powerful PC configurations.

Don’t let the galaxy choke you 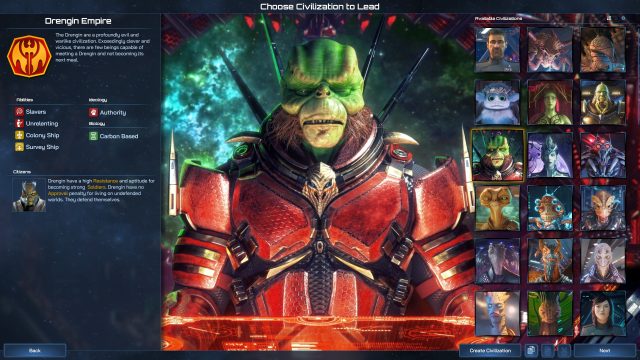 Big maps can quickly choke the player too. This is a turn-based game where things rarely unfold without your input, and the number of prompts in the mid and late-game can be overwhelming. To some extent, the clever separation of the colonized planets into the core worlds and generic colonies mitigates that. All habitable worlds have a quality score, with a higher value translating into a greater number of surface tiles you can build on. Those big, fat planets are prime candidates for micro-management, unlocked after you designate their governor. Now, good candidates for governors are even rarer than quality habitable worlds, so you’ll be pressed to assign those to your best planets. Other, lesser colonized planets will serve as the resource outposts for core worlds, demanding little attention.

Those guv’nors come from the pool of recruitable specialists you can put into various roles, such as government ministers or ship captains. They also have loyalty value, especially important to governors. A disloyal planetary administrator can easily switch allegiance in a contested sector due to the influence pressure. Specialists’ traits and loyalty values are predominantly random, but certain technologies augment the selection, increasing the values in fresh “spawns.” 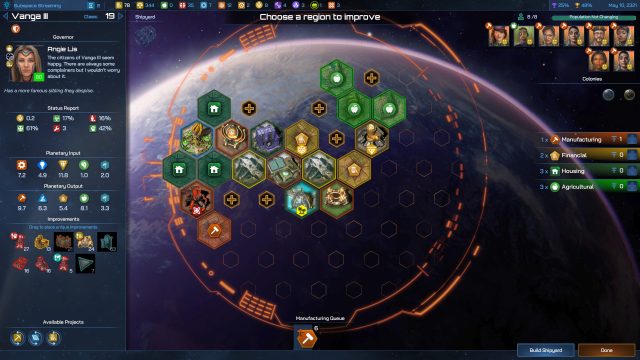 All the good ideas aside, the whole experience will turn into a fly-swatting grind when the conflict inevitably starts. There is no way to automate combat interception, so it will be up to you to manually chase and destroy the opponent’s ships and fleets. On smaller maps, that activity is manageable, but every incremental enlargement of the gameworld complicates things exponentially. The workload can be staggering because even a single fighter can lay siege and conquer colony worlds. Neither you nor your foes are compelled to concentrate ships in big, decisive fleets. You’ll deal with the dispersed units all the time, chasing them across the cosmos, turn after turn. It’s beyond tiresome. The game could really use some kind of auto-intercept utility.

The enemy AI is nothing special either. They seldom display any intelligent or exploitative behavior, deciding to antagonize you only after you start to lag behind them in military strength. Galactic Civilizations 4 uses the old system from Sid Meier’s Civ games, in which “harder” AI mostly means buffing the resource and research yields of AI factions. 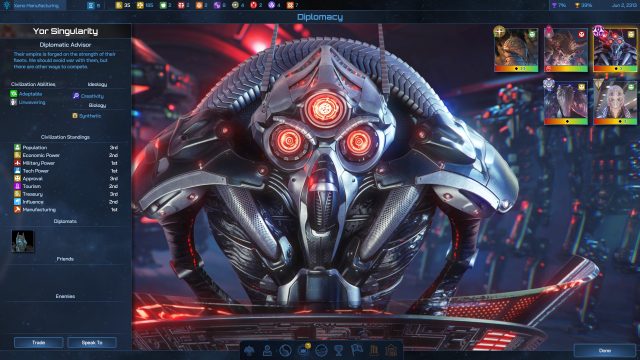 Galactic Civilizations 4 is the first GalCiv to feature a tutorial. Well, sort of a tutorial. The cosmic equivalent of Microsoft Office Clippy pops up when new concepts are introduced, offering advice on how to proceed. Those bare-bones tips can help to some extent, but you’ll need much trial and error to fully grasp the game. The utility of Economic, Military, and Communication starbases, for example, is clear in theory; In practice, however, things are wildly different. A military base, for instance, doesn’t do anything by itself; It’s not meant to protect your planets or fire at intruding ships unless attacked directly. Another example: any ship can lay siege and conquer colony worlds, but only transport fleets can snatch the core planets. I learned that fact only after a ragequit-fueled Reddit research. Patience is a virtue. If you lack it, stay away from this one.

For most GalCiv veterans, Galactic Civilizations 4 will feel like an incremental upgrade that failed to address most problems the series drags from 2004. Players attempting the switch from Stellaris will be puzzled about how something this archaic could be considered a legitimate challenger to the 4X throne. This is the late XX century game dressed in the modern engine. Nothing more, nothing less.