Gears of War wasn’t the first game that combined shooting and taking cover, but it’s probably the most famous of them all. With this game, cover shooters entered the mainstream. Gears of War defined the Xbox 360 platform in the same way Halo: Combat Evolved defined the original Xbox. The Gears series became the most prolific franchise for Microsoft consoles and, to a lesser extent, PC – with six main games and two spinoffs in the last 14 years. It also helped establish one very witty, all-American moniker… DudeBro. Gears of War was the first proper DudeBro game on the market, but more on that later. 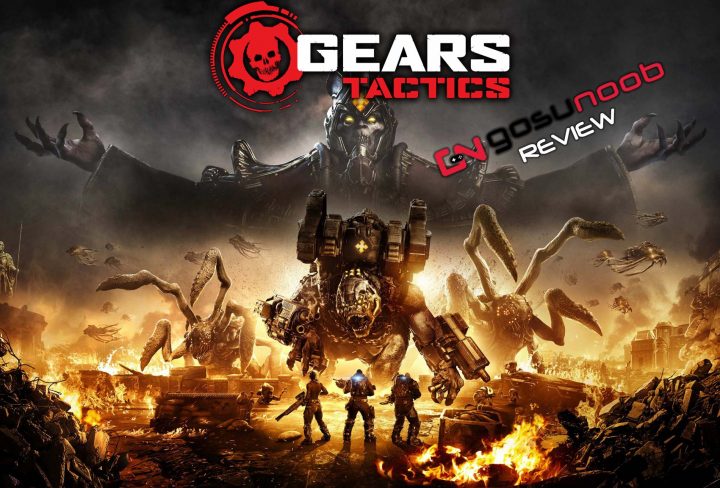 One of those spinoffs and most recent Gears game is Gears Tactics. It is a prequel to all other Gears games and also the very first one that premiered on PC instead of on Xbox (the console version is due in fall/winter). In the Gears timeline, Tactics is placed in the first phase of the war between humans and Locust, genetically engineered subterranean invaders that overran cities on the planet Sera, prompting the government into obliterating them from the orbit. The game follows the story of Gabe Diaz, a former Lieutenant Colonel in the Coalition of Ordered Governments Engineering Corps, now a humble sergeant in charge of a motor pool due to the sin of insubordination. He and his ever-growing company of rag-tag survivors will be tasked with the most important guerilla operation in the war – killing Ukkon, a Locust general/geneticist responsible for creating a legion of mutants that devastated once a thriving human colony.

Gears Tactics follows the core mechanical aspects of Gears shooters, but translates them into turn-based, tactical form. Using half or full terrain cover, having a defined set of action points for your units, and 3D isometric environments – all of these features suggest that the game borrows heavily from the modern XCOM games by Firaxis. But the truth is, it goes much deeper than that. The founding inspiration was not just XCOM, as many (very) young apprentices in game journalism think, but the good old Incubation: Time is Running Out. This great game from 1997, a tactical spinoff of the Battle Isle strategy universe had a robust, turn-based gameplay and a sinister vibe that combined SF staples with survival horror. It felt like Aliens without being set in an actual licensed Alien universe. 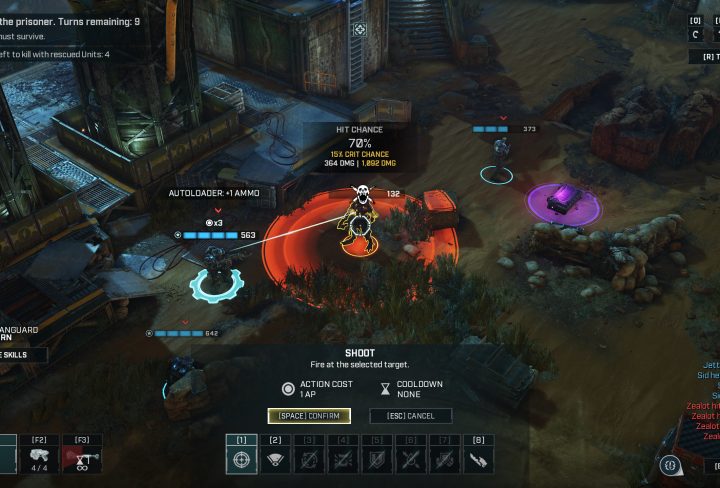 Horror in Gears Tactics is not the focal point like it was in Incubation, but the turn-based mechanic presented in the game and its mission structure has clearly evolved from that game. Tactics is all there is! There is no base-building, economy, and tech progress as in XCOM games – instead of an ever-evolving threat on Geoscape, you have a fixed set of story missions augmented with an even bigger number of side missions which provide the filler necessary for the 22+ hours campaign. Between missions, you can level up your troops by choosing nodes in their class-dependent talent trees, and by using weapon and armor modules you looted for augmenting their gear. The system is very simple and straightforward.

How many Locust can you kill before you get bored?

The simplicity expands into the mission design. There are only a few templates in their design: defense of two fixed points on the map, race against time while collecting loot boxes, rescuing an X number of troops, and finally, a “kill everything that moves” type of mission, with three boss fights that are an exception from those rules. It would all be mega-boring without two important factors. First and foremost is the quality of the core turn-based combat, and the progressively increasing complexity of actions you can perform. Your heroes level up and unlock new special attacks that, in many cases, create a battlefield synergy. For example, one talent enables +1 action point to any troops in the vicinity of a soldier that performs a successful melee execution. This is the signature move, one that is best-known in the Gears of War franchise – getting closer to Locust grub and sawing it in half with chainsaw bayonet mounted on the Lancer rifle. Yes, the game is definitely 18+… 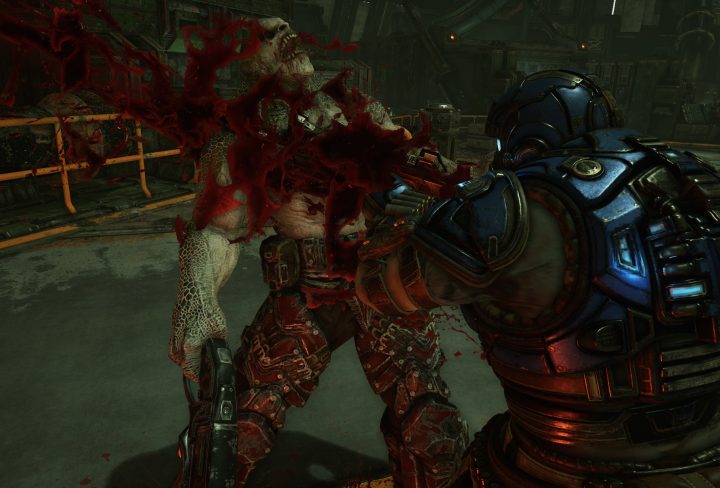 The second factor that makes the game interesting is the dialogues between heroes, which vary between lighthearted banter, continue through to doomsday whining, and all the way to the (predominant) DudeBro encouragement. We still owe you an explanation of the “DudeBro games” phenomena… One respectable online source states that DudeBros are “suburban males, usually 16-25 years of age, hailing from anywhere, USA. Characterized by their love of College football, pickup trucks/SUVs, beer, cut off khaki cargo shorts, etc.”. Well, almost spot on regarding the Gears series heroes, save for a fact that instead of America, we have planet Sera, and, of course, that several prominent Gears heroes are women… DudeSistahs? Definitely! Anyways, the Gears franchise heroes are the equivalent of college jocks in metal armors, talking in slang, preferring straight, determined, short answers over any deep philosophy. Their motivations are clear – they care for each other, they have no doubt about their role in the world… All Gears of War games are tailor-made for the DudeBro audience, and that’s perfectly fine with us. 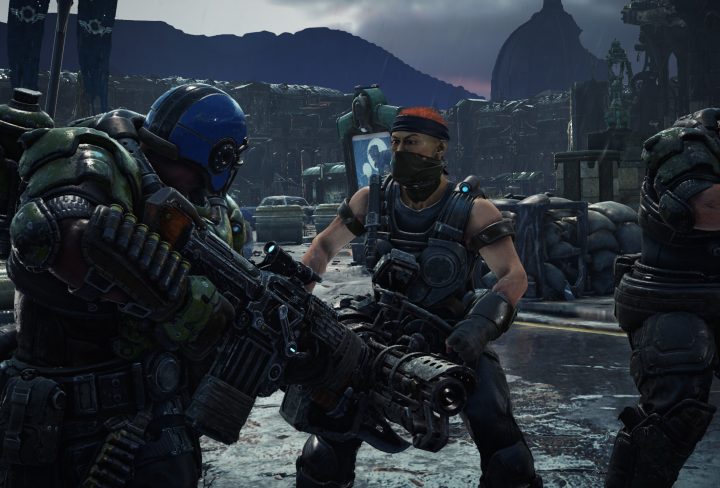 Not all customers are created equal

Gears Tactics is a game with a very “experimental” price, to say the least… If you wish to purchase it on Steam, as you probably would, you will be asked for 69.99 USD, which is ten bucks more than the established price for most expensive AAA games. The price on Windows Marketplace, Microsoft’s own Storefront in Windows 10, is 59.99 USD, AKA “a normal high price”. Why is there a difference in prices? Microsoft is a company with a shiny new slogan “Be What’s Next”, and prides itself in its efforts regarding a full spectrum evolution of interaction between humans and technology, but this ham-fisted, brute approach evokes memories of capitalism in the eighties. Take it or leave it. Greed is good. Our way or the highway. Dear MS, customers should be incentivized to use your store, not held at a price gunpoint if they wish to purchase YOUR OWN PRODUCT elsewhere. Please do better in the future. 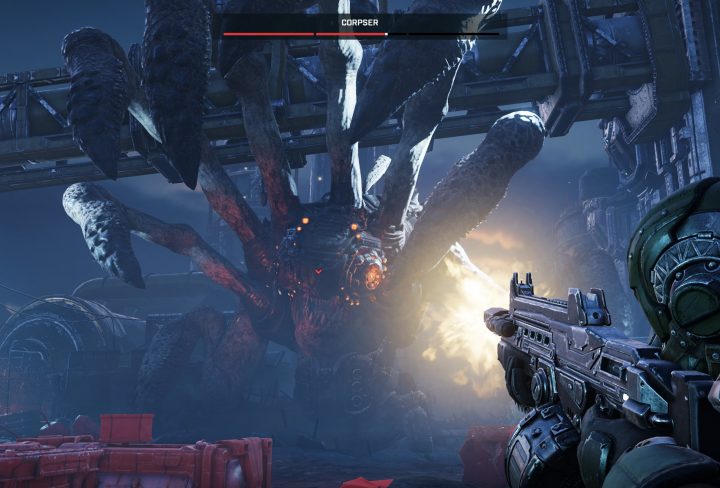 Is Gears Tactics the game for you? This depends on several important factors – budget being one of the most important factors these days. For 19.99 USD, you could purchase XCOM: Chimera Squad, which is a pretty similar game in many aspects (that deal was even better in the launch week, when Chimera cost only 9.99 USD). Both games are single-player only, both have 20+ hour campaigns, both have solid historical foundations, but Gears Tactics is a major AAA title with grander ambitions and a more important place inside its franchise.