Goat Simulator was released nine years ago and the world became neither better nor worse because of it. The game was hilarious, inexpensive, and offered stupid, physics-based fun. You got to play as a rampaging goat, racking up points in the suburban playground of destruction. Headbutting people, doing backflips and making impossible stunts, stumbling upon hidden stuff, easter eggs, and pop-culture references.

Originally a PC release, it was ported to every platform under the sun and sold millions over the years. So naturally, for the sequel, the developer had to manage expectations and get a bit more serious. Except in the numbering department, labeling their second game as the third, sowing more confusion than HAHAHAs. Regarding gameplay systems, they managed to avoid the ACDSee trap, focusing on simplicity and fun over adding too much new stuff and features. They massively improved production values, though. Goat Simulator 3 is an Unreal Engine 5 game that, unlike the clunky original, looks polished and expensive.

This Goat is Going Places 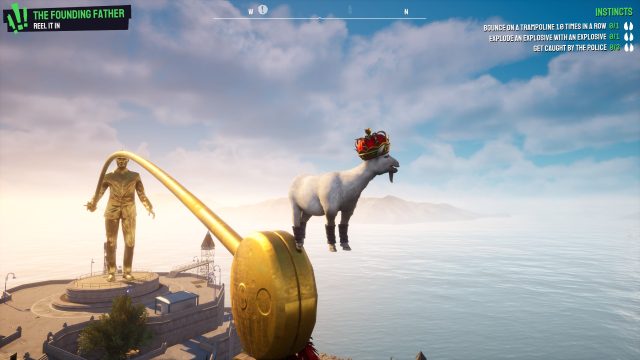 Soo, you are still a playful goat dead-set on the path of mayhem. This time, however, there’s a structure in place – instead of wanton randomness, the goat has clear objectives. You will complete various events (micro-quests, really), racking up points. There are two kinds of those. Karma points are used to unlock various gear for your goat, but the Illuminati points are more closely tied to the plot. Every completed quest fills your Illuminati pool, gradually opening seals inside your Goat castle. Yeah, Goat Simulator now has a hub area similar to Roundtable Hold in Elden Ring. Most areas are locked initially, opening up as you complete more events. After you breach the seventh seal, you get to fight a boss and that’s it, campaign-wise.

There’s absolutely no pressure to do it, though. You can safely ignore most of the “campaign” structure and focus on exploration and violent mischief. Completing the “instincts”, internal achievements wildly varying in nature lies halfway between aimless mayhem and questing. Some instincts, like doing 720 backflip fall from a great height are somewhat skill-based, but a lot of them are just semi-moronic time wasters. Jump on the trampoline ten times in a row? Set yourself on fire and douse it by jumping into the water? I’ll do that for a thousand Karma points! You’ll use those for purchasing cosmetics and various gear, some of which actually have an active ability. I really liked the fart-enabling taco shoes, useful for making longer jumps. 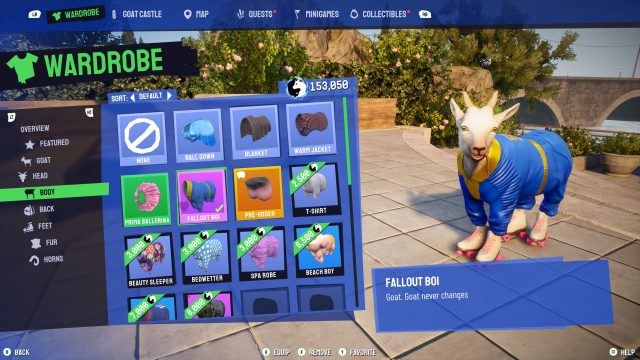 The open world is bigger this time around and absolutely brimming with stuff, NPCs, and hijackable vehicles. A goat that steals cars is not really weird compared to the intense insanity of everything else, though. Your default tools are your horns and tongue – the first one is useful for ramming people and objects, while the second is essential for dragging those. Dragging where? Well, in one typical quest, you are to become President and to do that, you need to drag people to the voting booths, kicking and screaming. In some other quest, you’ll be tasked with freeing the captive Orca. Ramming the glass enclosure and pulling the giant whale toward the ocean will solve that problem, obviously. Most of the quests are short and very simple, but a few require patience. Searching for Banksy-style graffiti in an urban environment and restoring them requires a good eye and lots of platforming.

Goat Simulator 3 is full of pop culture references. It starts with a parody of Skyrim, with our goat waking up in the wagon, and it’s uphill (or downhill) after that. Apart from a plethora of gaming-related jabs featuring Doom, Counter-Strike, and others, it screws with Lord of the Rings, Oceans 11, Baywatch, etc. Of course, expect many random jokes targeting rednecks, space exploration, elections, superheroes, and Swedes… Although it seems that nothing is off the limits, humor is actually pretty safe for work.

I’d Buy That For a Dollar 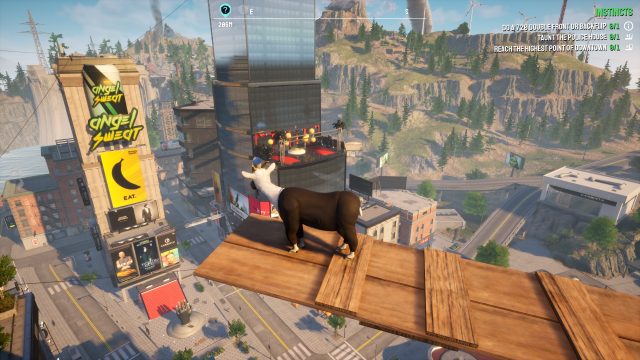 Goat is indestructible, which takes away most of the potential challenge. You can safely fall from any height, electrocute yourself, and jump into the lava or water. The worst thing that could happen is a minor inconvenience after failed acrobatics or platforming. The game has a lot of verticalities, and many events require climbing and semi-precise jumping. Falling down and repeating ascent is the biggest potential drawback there is.

Goat Simulator 3 has split-screen local multiplayer, which makes it ideal for pacifying small herds of unruly kids. Just place them in front of the screen with joypads in their hands, and you can safely take a nap. You’ll wake up refreshed, knowing that little rascals are still glued to the action. The game carries PEGI 12/ESRB Teen rating, but there’s absolutely nothing here that’s not suitable for a younger audience. If they watch Cartoon Network, you can be sure they experienced more severe comic mischief.

If you plan to play it solo, you’ll need to swallow the steep-ish price of thirty bucks. To be perfectly honest, it’s a bit too much for five or six hours of brainless fun. On PC, the game is Epic exclusive, which is also going to rub some people the wrong way. Goat Simulator 3 feels like a product that people usually buy on impulse, during major sales. That would be our definite advice.