A potential solution to all Earth’s problems could be just giving up on it and colonizing another world. We’ll need a big colony ship, a willing crew, and a habitable planet in sight and we are in business. In IXION, Humanity had reached the technology threshold for attempting such a journey. By fitting the hyperspace engine on the massive Tiqqun space station, Dolos corporation had made the late 21. Century equivalent of Nauvoo, Mormon colony ship from Expanse S02 that was supposed to reach Alpha Centaury in 100 years. In theory, Tiqqun can make that trip in a blink of an eye, if the so-called “Vohle” engine performs as advertised.

There wasn’t going to be much of a game if everything went smoothly with its maiden flight. After firing up the Vohle thingy, Tiqqun folded space or whatever and reached its destination, but the Moon exploded, presumably due to the unexpected forces in the wake of the interstellar jump. Tiqqun made the return trip to Earth instantly and arrived at the scene of pure devastation. Not only the ruined Moon fell on Earth in pieces, but the jump triggered some temporal shift as well. Tiqqun transitioned through space and time and returned to Earth and a Solar system devoid of people. Humanity’s last hope now lies with a dangerous ark-ship with a skeleton crew and irreparable hull damage.

All of This Has Happened Before 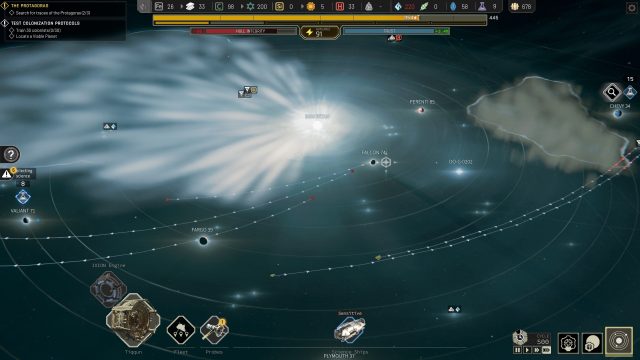 Your ultimate objective as the Tiqqun’s administrator is searching for a habitable world, settling it, and preserving Humanity. The game consists of several chapters, each situated in a singular star system, where you’ll explore, gather resources and try to figure out what exactly happened during and after the engine test. Stumbling upon wrecked ships and stations full of people in cryogenic sleep and unfreezing them on board the station is the only way to get more crew. Human resources, however, will be just one of many problems you are going to face.

IXION is a hybrid of a city builder and linear exploration/adventure game which operates in a pausable real-time fashion. After the initial jump, the ship’s hull started to deteriorate, requiring constant repairs that use precious alloys. That mechanic is the same as burning the coal in Frostpunk’s generator. In this case, too, it represents the chief element that prevents you from having fun with the game. It puts constant pressure to get things done as quickly as possible; it forces you to skip the flavor and lore text during the encounters and penalizes you for expanding your operations.

All of This Will Happen Again 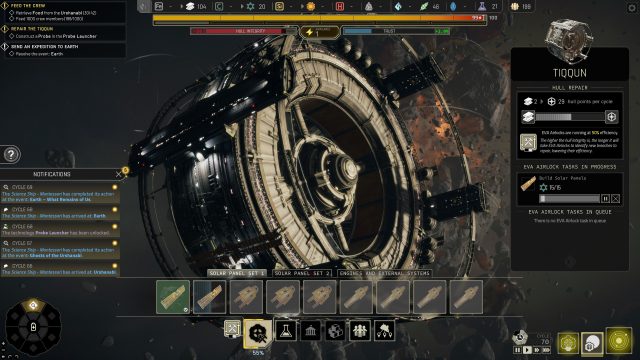 That last bit requires an explanation. Tiqqun is torus-shaped and consists of six interconnected, habitable sectors. Building the docks, ore processing facilities, various factories, warehouses, and accommodation for the population takes up space. Much space. Pretty soon, during the first chapter even, you will run out of available room in the starting sector, forcing you to open the next one. The resource ball starts rolling…

Apart from requiring separate basic infrastructure (habitation, workshop, mess hall, stockpiles), each new sector increases the expenditure of alloy for patching the hull. To get it, you need to find iron-rich asteroids in the system by launching probes; then you need to send mining ships to mine those and haul raw ore to Tiqqun via cargo vessels. Tiqqun needs available storage space for storing the ore and processing facilities for refining it into alloys. You need to set up complex logistical chain for a single, finite resource, for which the need increases as the game progresses.

Similar chains exist for polymers, needed for constructing the solar panels on Tiqqun’s outer hull, electronics, food… The hull needs alloys, people need sustenance and living space, the industry needs power, etc. Finding the floor space for the essential infrastructure and optimizing the layout of each sector is a core challenge. You will also need to research new and improved systems, but the new tech thresholds are mostly tied to specific points in the story. 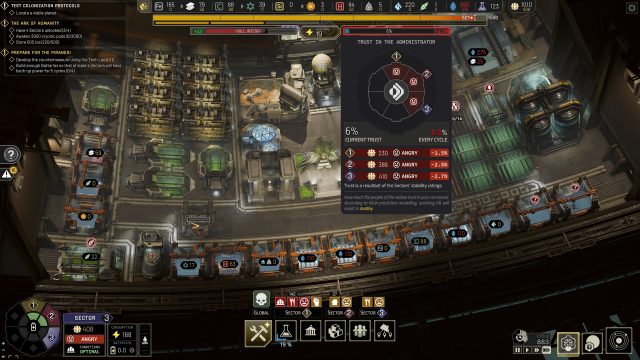 On top of everything, you need to worry about the crew’s morale. Going hungry or homeless drops it very fast, and even being too slow in completing chapters have a detrimental effect on it. Dropping morale causes strikes, which often cripple critical infrastructure such as infirmaries or mess halls, exacerbating the problem. More often than not, morale starts plunging for unknown reasons, forcing you to build bulky morale-boosting buildings, set a relaxed work regime, or proclaim some other policy. Boosting morale always comes with an expense on efficiency. Mood-enhancing facilities take the precious sector space, and generous policies such as bigger meals mean greater expenditure of limited resources.

In conclusion, the IXION crew has to be the most spoiled bunch of cretins ever launched into orbit. For example, they will suffer a morale drop if you start recycling waste on board the ship! They will constantly demand impossible or improbable bullshit, punishing you with mood swings if you refuse or fail to complete the requests. What about martial law, you might ask? We all watched Battlestar Galactica and know harsh measures are warranted if the fate of Humanity is at stake. Well, in IXION, you are a pacifist administrator. You can’t even vent the striking fuckers through the airlock, even if that would be a sane and logical thing to do. 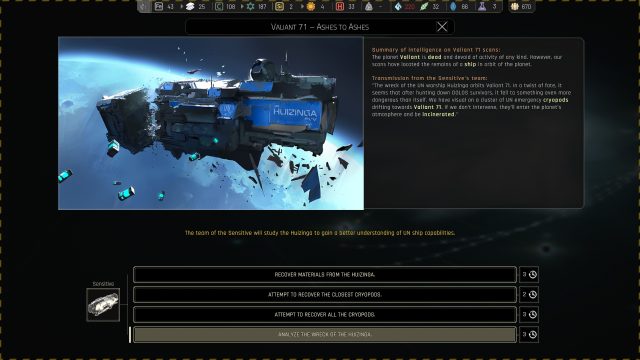 IXION is a very difficult, unforgiving game. The pressure is constant and unavoidable, and the breathing room is pretty much nonexistent. You need to be a magician to avoid the unfair, downward spiral. The significant challenge would be easier to swallow if the game wasn’t downright unfair in places. Getting the unrealistic objectives near the end of the chapter, when the entire sector is depleted of resources, is a common occurrence. The game expects you to fail repeatedly and memorize the timing of its whims. If you are OK with that, you will have fun here. If not, be prepared for violent ragequits. You can also expect some bugs, although most game-breaking ones were patched during the launch week.