The newest trend in gaming is screwing with time. Lemnis Gate (a semi-clumsy pun on lemniscate, the famous infinity symbol) is an online arena shooter with temporal loops. This game takes time paradoxes and shoves them down your throat, making its mixture of 4D chess and tic-tac-toe one of the unique online experiences out there. Our Lemnis Gate Review explains all of its intricacies

Each match has two halves, and each half consists of five 25 second turns for every player. You get to choose one of the seven available heroes for each turn. Once your opponent begins their turn, the timeline becomes their playground, so they can go for objectives or try to stop you. If they choose the latter and succeed in killing you, no worries, you can continue playing as a ghost. Be sure to eliminate your killer in your next turn before they make the fatal shot, so your dead character can live again in the next round. Sounds confusing? 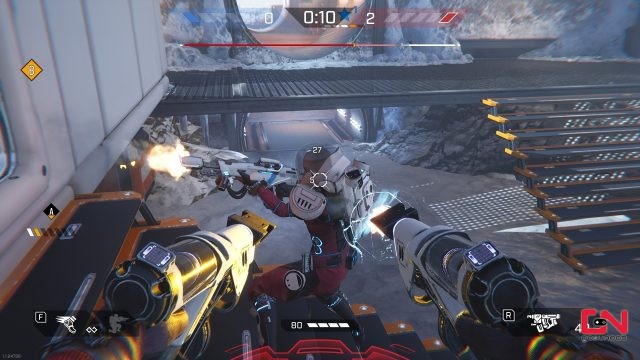 For all its ingenuity, the premise of Lemnis Gate is a complex concept to explain. The lackluster tutorial would make people at Paradox Interactive gasp with envy. There’s no story, no elaborate explanation or context for the game’s setting and game modes. The game as a whole would benefit from some context (e.g., like in Warframe) so it would feel more organic. Nonetheless, once you give it some time and win your first round, Lemnis Gate’s magic will kick in. The Upward-spiralling learning curve is indeed challenging but not impossible.

For every match, you have seven heroes at your disposal. The generic bunch is as follows: Kapitan, your run of the mill soldier with a rifle and grenades; Toxin, masked poison dispenser with all-axis teleportation; Vendetta, a shotgun-wielding engineer who can place turrets on the map; Striker, the sniper with time slowing ability; Deathblow, a rocketeer with landmines; Karl, a robot who can deploy shields and fires a beam weapon, and lastly Rush, who plays and looks like a child of Tracer and Julio from Overwatch. In addition to your generic team of operatives, you have a recon drone at your disposal so you can scan the map between rounds for strategic advantage. Every turn offers a chance to deploy one of these seven heroes. You can deploy each hero once per half of the match. 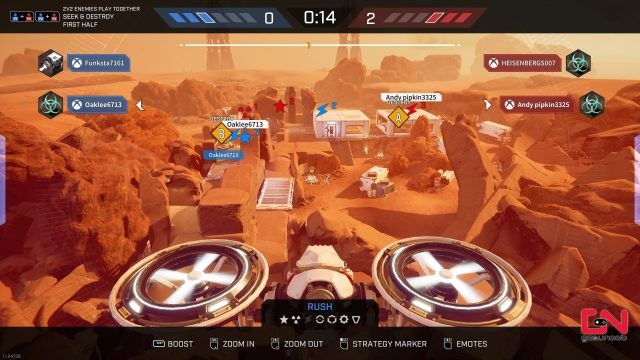 Game modes are the ones we all expect from a game like this – Deathmatch, Attack/Defend, Domination, and the inevitable grab-something-and-bring-it-back-to-the-base mode. Even without countless challenging modes, the amount of fun you can have here is potentially abundant. All modes can be played in turn-based fashion or simultaneously. When you choose a simultaneous match, you and your opponent(s) will deploy heroes simultaneously in every loop. The turn-based mode lets you play your respective turns one by one, but it’s still the same loop. Think of it as multitracking and overdubbing in a music studio. As you may presume, the simultaneous mode favors faster FPS reflexes, and the turn-based will be a tactician’s dream.

When you start playing, you’ll quickly be amazed at how simple and efficient the principle is in practice. Complex on paper, hard to explain, but works like a charm. Soon enough, you’ll be making strategies for how best to ruin the opponent’s efforts as quickly as possible. In terms of OP tactics, let’s just say that it’s good to save the sniper until a later turn (say, the penultimate 4th) so you can turn things around near the end.

There is also leveling in the game, but the progression seems to have little to no effect on gameplay. Some of the skill trees are purely cosmetic. Others bring you new weapons. Not great, not terrible. However, the game values your wits, and it’s possibly trying a bit too hard to tell you that. Its core value is also its most prominent potential weakness. Playing 4D chess with FPS mechanics is not everyone’s cup of tea. That’s one explanation for the critical lack of players – you will spend almost equal amounts of time in matches as in queues. The cross-play is an option between Xbox and PC, and it certainly helps (as does the Game Pass inclusion), but the game still needs a significant influx of players to become viable long-term.

Visually bland, but looks arent everything 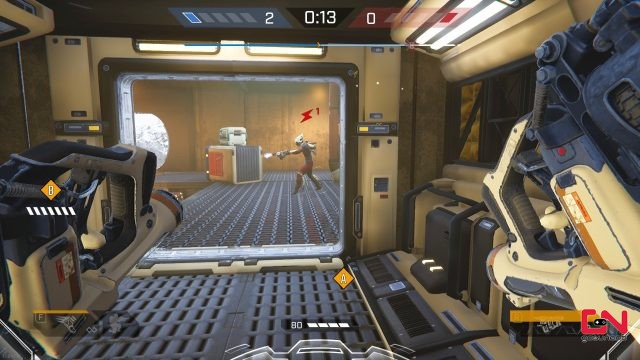 Even though Lemnis Gate is not a stylistic visual/design masterpiece such as Overwatch, it has no major visual flaws. It may seem a bit bland at times, and the maps could be a bit more diverse, but this is a beginning of a life cycle of an online game, so a bit of patience is required. The textures and models are all eye-pleasing, but the game sadly does suffer from some technical calamities. More than often, you’ll find that quitting to menu means crashing. Sometimes, Lemnis Game outright fails to load, etc. Those problems need prompt fixing. 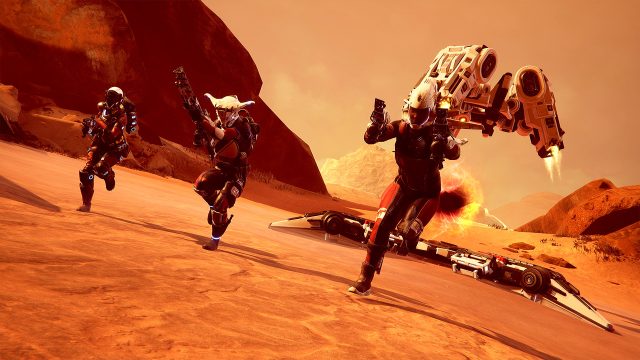 As a brave, revolutionary concept ahead of its time (oh, snap!), Lemnis Gate deserves your attention, but it also deserves attention from its developers, who should be over this game 24/7. Lemnis Gate’s basic concept is downright genius, the shooting mechanics are more than decent, so there is hope for some longevity. But the other outcome is also very much possible, and sadly, there is no time-rewinding in the oversaturated, over-competitive multiplayer market.

NEXT POSTTake a Picture of Ten Sheep in Good Life