After a spectacular set of delays that ended up stretching for almost four years, Oddworld: Soulstorm was finally released. Owners of the PlayStation 5, as if they weren’t lucky enough, got the game for free, provided they had subscribed to PlayStation Plus, and the game is also available on PC (EPIC store). During the PS5 event in June last year, it has been confirmed that Soulstorm will remain PlayStation exclusive on consoles, which is too bad as the game seems like a perfect fit for the Nintendo Switch. 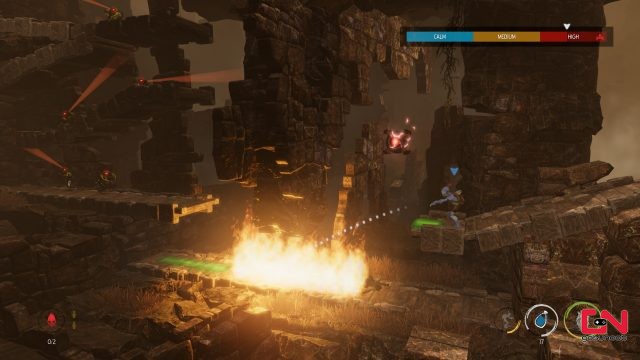 Oddworld: Soulstorm is not a new chapter in the Oddworld universe but the clever reimagining of 1998’s Oddworld: Abe’s Exoddus. The process of remolding the game was even more radical than they used in Oddworld: New ‘n’ Tasty (2014), which itself was a remake of the original and fabulous Oddworld: Abe’s Oddysee (1997). The previous game’s financial success proved that a more comprehensive approach to freshening up classic games makes better sense than upscaling the resolution and updating the textures. New audiences demand both the original ZING and the touch of XXI century BLING.

Following up the liberation of his people and destruction of evil Rupture farms, Abe must lead Mudokons to safety, avoiding the forces of disgusting tycoon Molluck the Glukkon, determined as ever to re-enslave his former workforce and turn them into a new and exciting meat-based product. I’m sure that the modern, more progressive assemblage is going to find lots of anti-capitalism metaphors in the initial setup, but I doubt that the original designers had any sort of socio-political agenda.

Soulstorm has the same general story as the Exoddus, but the levels, layout and game mechanics, in general, feel entirely new. At its core, it is still a 2.5D platformer, but the puzzles are more complex, perspective shifts and pseudo-3D segments are regular occurrences. The looting and crafting are two completely new mechanics that further complicate the challenge presented to the player, and the Quarma system is revised to not only count the number of saved Mudokons but the number of the dead Sligs as well. That’s right, Soulstorm now penalizes you for mind-controlling and using the green baddies to shoot each other, walk over mines or jump over the cliff, which is bullshit. If you want to reach the true ending, you must try to be as pacifist as possible, and that almost sounds like the agenda I previously mentioned that doesn’t exist here. 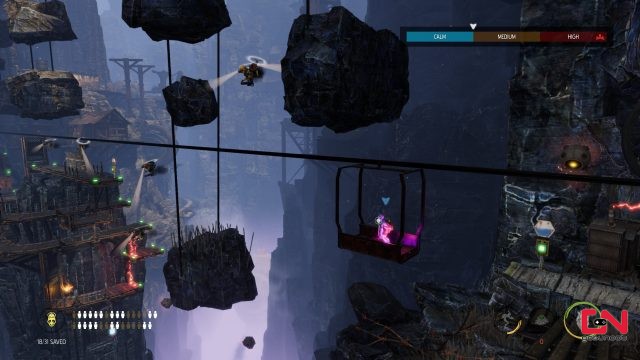 Great many puzzle platform games are sort of misleading regarding their target audience and challenge, emphasizing cute characters that appeal to children, just to frustrate them with the impossible difficulty. You simply can’t mistake Oddworld: Soulstorm for something (inherently dishonest) like this, as the game projects weirdness and cruelty from the very beginning. Although it’s initially relatively easy, the challenge level will eventually shoot up to the exosphere, the 3rd layer above the stratosphere for people not versed in planetology.

Oddworld games were always very difficult, demanding pixel-perfect precision and timing while solving the environmental or combat challenges. Soulstorm retains all that but adds more generously placed checkpoints which significantly reduces the repetition. You will still die a lot, literary hundreds of times, until you reach the end or ragequit. Freshly introduced ability to double jump greatly helps to avoid the most frequent and banal type of death, which is missing the landing and falling into some hazard, providing the opportunity for the game to task and murder you in more creative ways. 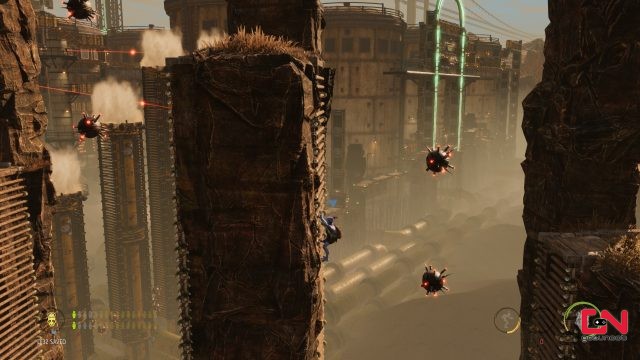 I previously mentioned looting and crafting… Pickpocketing the sleeping Sligs, destroying the wooden boxes, or rummaging thru lockers or urns often yields junk that can be combined into something useful like stun mines, smoke grenades, or flares you’ll need for navigating the pitch-black mine shafts. Flares also help ignite the spilled soulstorm brew, which burns enemies and destroys some wooden obstacles. Finding and combining items slowly becomes the thing you depend on for easing the pain of later, more difficult levels, motivating you to look for that itemized clutch instead of giving you no choice but to git gud.

Overall, looting and crafting mechanics feels somewhat forced, adding an extra layer of complexity to an otherwise “clean”, clever and streamlined game. In the next Oddworld game, developers should perhaps refrain from adding additional mechanics for the sake of “more stuff”, lest they risk becoming the platforming equivalent of ACDSee, the bloated monstrosity which was once a perfect little picture viewer software.

Oddworld: Soulstorm is a difficult beast to master, especially if you wish to reach the true ending. Trying to save as many Mudokons as possible is both a great motivator and the source of endless frustration – they follow your lead when commanded to do so, but the slight delay in execution of some moves, like mass hiding in the lockers in one of the levels, can screw the careful timing needed to avoid the baddies and save as much of those klutzes as possible. 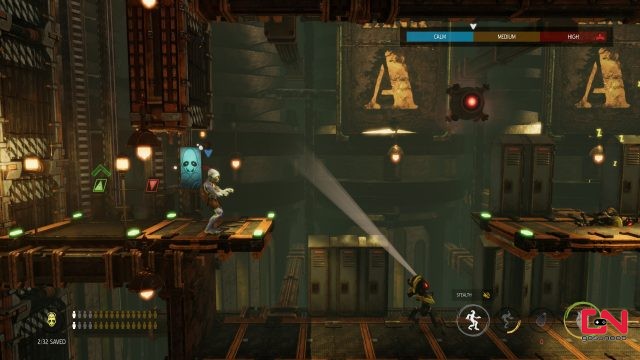 Depending on your ability and patience, you will need between 15 and 25 hours of steely focused, precise gameplay to finish this one. Soulstorm is not the game to play when tired after a long day of work or being frustrated due to living on Earth in 2021. Most of the initial bugs in the PlayStation 5 version are ironed out by now, so at least there is one less thing to poke you in the eye while playing.