A long time ago, Sid Meier was a creative Jupiter in the solar system of the innovative game design, and Brian Reynolds and Soren Johnson were his Ganymede and Io. Those moons eventually escaped the orbit of the big gas giant, trailblazing their independent trajectories in the universe. Back in the day and while still locked in Sid’s gravity well, Reynolds designed Alpha Centauri, a genuinely groundbreaking 4X game that massively improved upon Civilization II. More than two decades later, Soren Johnson’s Old World did the same to Civilization VI. Progeny had bested the father again.

I’m quite aware that this cosmic allegory doesn’t make much sense for players familiar with orbital dynamics and Newtonian physics. In Old World, they won’t be making rockets, planes, and colony ship to Alpha Centauri anyway, but they will be dealing with lots of fathers, daughters, and sons. This intelligent crossbreed between Civilization and Crusader Kings has more limited historical scope, covering the classical antiquity and Middle Ages, with technology tree ending just before Renaissance and gunpowder. 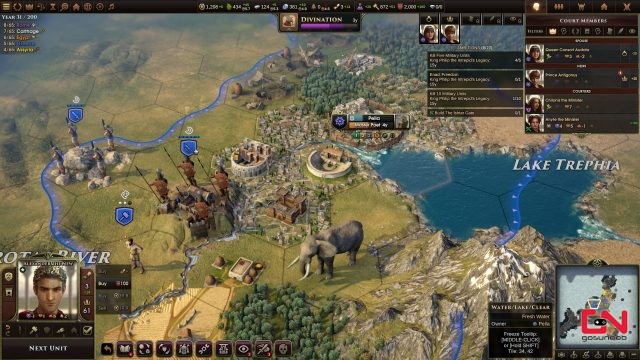 Soren Johnson was co-designer for Civ III and lead designer for Civ IV, so the visual and conceptual elements of Old World will be inherently familiar to any long-time fan of Sid Meier’s legendary series. Under the hood, however, things work differently in many crucial aspects, most importantly, on the leadership front. Instead of being the immortal sovereign, guiding your people from the dawn of history to the era of space exploration, you’ll play as a leader of your dynasty who ages as the turns go by, requiring their descendant to take over when the reaper comes knockin’. Like Crusader Kings, Old World revolves around characters, courtiers, family members, rivals, and foreign dignitaries, with somewhat simplified interactions and relations between them. Operating within this framework, you must deal with expansion, resources, barbarians, cities, wonders, and competing civilizations, just like in any average Civ. 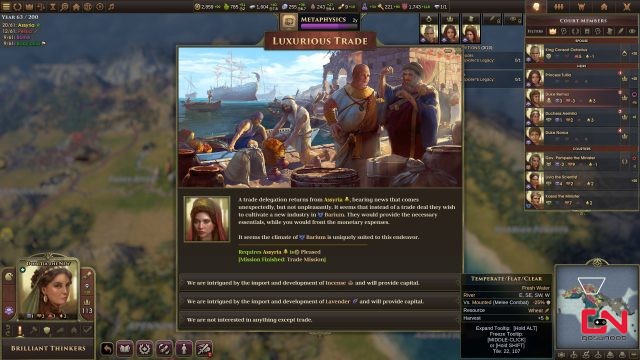 The player workload is significantly greater compared to a typical Civilization game, and that could be a problem if you are up for a casual-ish challenge. One of my work buddies prefers to unwind with Civilization V, setting it in on easy, just clicking away the history with unopposed expansion. That approach is simply not viable here, if for nothing else, then because of constant event prompts. Do you want your son to study philosophy, tactics, commerce, or something else? Do you insult a foreign dignitary who snubbed you on your own court, or do you let it slide? Will you waste food for a massive feast to please the plebs or risk discontent that can lead to armed rebellion? There are over 3000 events in the game, and like in Crusader Kings, they often move the campaign in a very unexpected direction. In one of my games, I was leading Rome and had excellent relations with Persia from the beginning, until the state dinner event where I blurted that my general Flavius is probably a better chess player than the young Persian sovereign who recently replaced his romanophile father; they soon declared war and almost crushed the rear end of my empire while my army was busy dealing with Assyrians on the other side of the map. Sometimes, the payoff from decisions can be a generation away, like that one time when I heavily invested into tactical training of my young daughter, who eventually became the front line general, commanding the unstoppable Cataphract division, the key decider in every open terrain engagement I had. 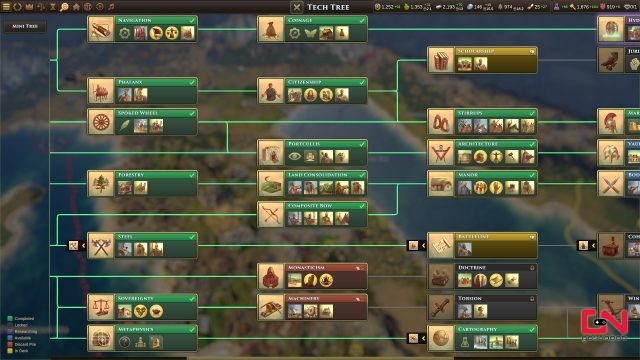 Yes, you can use characters in the field. You can also employ them as city governors, spymasters, diplomats, chairmen, etc., but the most significant benefit comes from the front-line command of the troops. Ideally, you will put them into the role that best fits their profile and skills, and while on the job, they will slowly evolve. My talented warrior daughter had finely tuned her tactical skill over the years, although I had several close shaves where I almost lost her. Her unique talent was healing her unit outside the friendly territory, so I often risked her heavy cavalry in the reconnaissance in force role. She preserved, again and again, dominating the Roman wilderness of pain and earning the nickname (or cognomen, as the game calls it) „The Invincible“. Her father, my previous ruler, died as „The Mason“, earning it after presiding over the completion of Hanging Gardens. Nice. 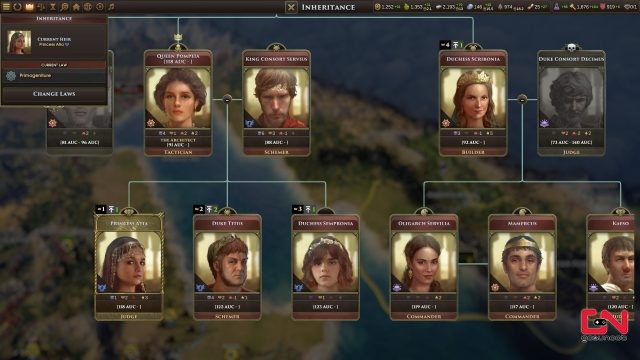 Closely tied to the success of the line of sovereigns is the legitimacy of the current ruler, an essential factor for the stability and prosperity of the empire. Along with the number of citizens, legitimacy directly affects the yearly pool of orders, the chief resource for directing military or civilian units in the field. Any movement or attack order depends on the same orders pool, also shared with the workers building in the countryside. The limited supply of orders means that you can’t spam units and hope for the best – ruler with low legitimacy and poor orders pool simply won’t be able to use all units in one turn. Although artificial in historical context, this concept is an excellent limiter for the ambitions of the incompetent lineages and lieges.

There are myriad ways to earn legitimacy – combat, exploration, expansion. Basically, anything of significance will boost it to some extent. There are also ambitions, individual goals that you can pick and choose from several randomly presented options. Fulfilling the ambitions is rewarded with massive legitimacy boosts, and any number that you failed to complete will exist in the form of legacy for your progeny, enabling the fruit of your loins to win you a posthumous chance to glory. 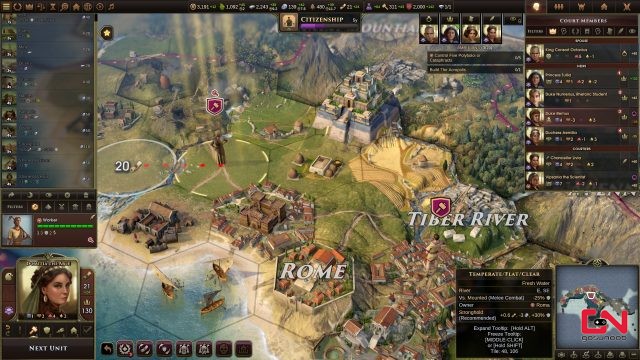 So far, so good… The game feels surprisingly complete features-wise from the get-go, but there are some venues that devs could explore and make it even better. First of all, the tutorial needs to be overhauled and streamlined, as most advanced concepts, such as various victory conditions and religion spread, are not clearly explained. There are only seven civilizations in the game, mostly Mediterranean and middle-eastern ones – expanding upon that would be a way to go. Also, except in some random events, there are no weather and climate effects on the strategic map, nor natural disasters like volcanic eruptions or floods. Apart from the urban buildup, the map feels „static“ to some extent.

However, none of the above is significant enough to put shade over this intelligent and exciting game. Old World is a winning combination of two established design philosophies, and I’m sure that it has a great future in front of it.