Orange Cast is a third-person shooter game set in space. That is what the authors want you to believe, at least. Developed by an independent Russian developer Team Rez, Orange Cast boasts inspiration from James S.A. Corey’s “The Expanse” novels and legendary franchises such as Mass Effect and Dead Space. Waving around significant influences and even bigger promises rarely delivers, which is a lesson Team Rez is yet to learn.

In full honesty, the game is INDEED set in space, and it uses the third-person shooter mechanic, so the developer’s claim is right to some extent. However, Orange Cast fails to deliver basic gaming concepts so gloriously that it becomes a car crash you can’t look away from, no matter how much you try. From the gameplay loop and the broken engine to the poorly translated story and dialog lines, Orange Cast quickly establishes itself as one of the worst entertainment products in the last couple of years. 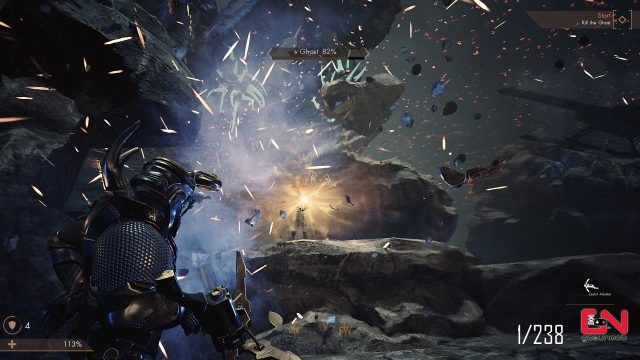 Presented with a confusing tutorial, you will find yourself in a generic alternative dimension in outer space. You play the role of a soldier in an Uber Unit suit that is (apparently) destined to save the universe from the “upcoming battles”, as the game phrases it. The atrociously animated cinematics and the weird sound effects will tell you that something is very, very wrong from the beginning. On top of all that, you’ll have to endure full Russian vocalization, translated in a way reminiscent of the early alpha version of Google Translate.

Once you swallow that pill, the game proceeds to attack your senses in the most brutal way possible. The drab color scheme of what Team Rez considers “exotic space locations” is only matched by the horrendous models and washed-up textures that somehow found their way here from 2002. Dark grey and brown landscapes with an unhealthy amount of unnecessary distortion effects and an occasional color pop look like a low-budget game of the Xbox 360 era. The special effects like explosions and fire from your arsenal make Counter-Strike 1.6 look like a Da Vinci painting. This game is a violent crime against eyesight, no other way to put it. 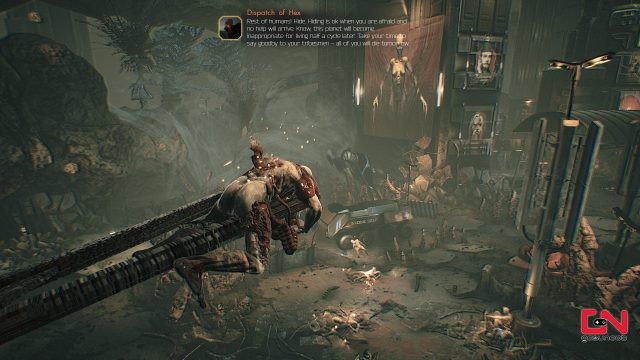 Even if you don’t care about graphics, the gameplay will put you off. While there is nothing to disappoint in the very concept of shooting from a third-person perspective, Orange Cast underdelivers the basics of this genre. Both the core mechanics and gameplay loop are underdeveloped. Shooting feels inconsequential, moving is unnatural and clunky, and there is no incentive to keep repeating that hideous chore. All guns in the game use the same ammo type and, similarly, share the same level of ineffectiveness. Enemies are spongy and love to spam you with lead, but they lack any trace of intelligence. There’s one tactic they use, and it mainly consists of grouping together and spamming you with bullets.

These gameplay inconsistencies sure do deliver some hilarious moments. Due to the game’s broken systems, you can never really run out of ammo if you keep reloading before it reaches zero. One enemy type, spider, is literally a reskinned head crab from the Half-Life series but lacking the jumping animation. Your hero cannot jump, but he will roll as if there’s no tomorrow. Often, the rolling action is the best way to move since the terrain often stops you with invisible barriers. One has to admit that making such an archaic working game with Unreal Engine 4 is a success in its way. You will often find yourself being shot from an unexpected location, but more often than not, the enemy forces will fire in a direction away from you, causing you the damage nonetheless. Maybe you’ll find it amusing when you see an enemy soldier throwing a grenade away from you and the grenade reversing the course towards you. Perhaps you won’t. 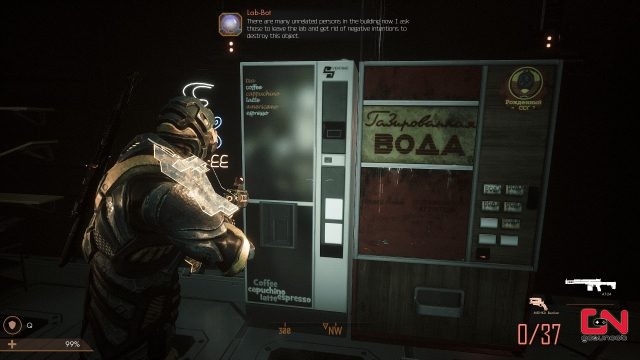 Even though its story is told in the worst cinematics since the dawn of 3D video games and the entire narrative consists of poorly translated text, Orange Cast can’t help taking itself seriously. In the not-so-distant future of humankind, corporations are ruling the galaxies. The cold war never ended, apparently, so the USSR red star found its way to the real stars – we have a mish-mash of space communism, corporative capitalism, mercenary armies, aliens, extradimensional beings, and super soldiers. Conspiracies and intrigue are all over the Orange Cast’s setting, but none of it reaches the player. The mentioned ruined translations are not hyperbole. From the menu items and story descriptions to the dialogue, all text is written in a variation of English language that is impossible to understand most of the time.

The promise of space exploration is a linear progression from planet to planet where you will clear waves of enemies in a tedious fashion. Snippets of the story presented to you seem chaotic, unrelated, and simply juxtaposed to prove how epic this universe is. There’s a significant lack of coherence, and the immersion is continuously broken by the game’s inadequacy. 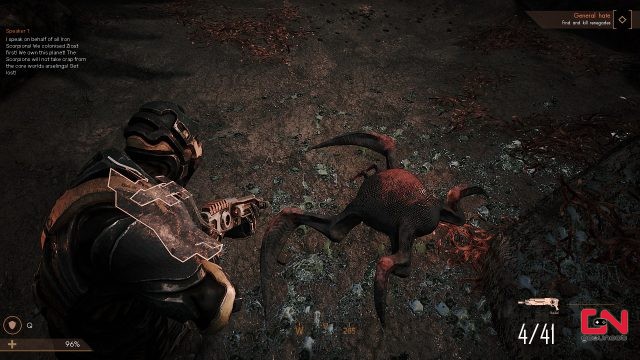 The only partially good aspect of Orange Cast is its music. The instrumentals often fit the environment, but the game’s overall sound quality is undermined by the irritating effects and the several recycled lines screaming at you every second. On top of all this, the game is simply not optimized. There were several instances where the game did not want to save or properly exit to Windows. The framerate drops after the prologue, which simply makes no sense, given the graphics quality. Also, if you try to remap the controls, the game will crash. Glitches and weird camera positions are omnipresent (meaning in cinematics, too) so if you try this, be ready for motion sickness.

Even at its current (low) price, Orange Cast is a total rip-off. I had never experienced something so profoundly broken that it deserves a particular horrible class of its own. Avoid this game like it’s a vial of concentrated Covid-19.