Some games are divisive as chewing tobacco, and Outriders is the prime example of that kind of polarization – just look at Reddit, and you’ll see the gaping maw between yay and nay players. I’m standing with the nay crowd, but I have reservations regarding the not-so-bad endgame. More on that later.

Outriders is an online-only, 3rd person looter-shooter that tries to combine elements of Mass Effect, Destiny, Gears of War, and Anthem in one complete package but succeeds only in being unfavorably compared to them. The game spins the tale of the doomed colony of Enoch, the would-be new home for Humanity that is troubled with deadly anomalies, hostile fauna, and infighting between colonists. You play the role of an Outrider, an elite soldier who spent the last 30 years after planetfall in emergency cryo-sleep, where he was put after the initial encounter with deadly energy swirl that killed his squad. Now, as „Altered“ and even more elite badass, he will use his newfound arcane powers to save the world from itself. 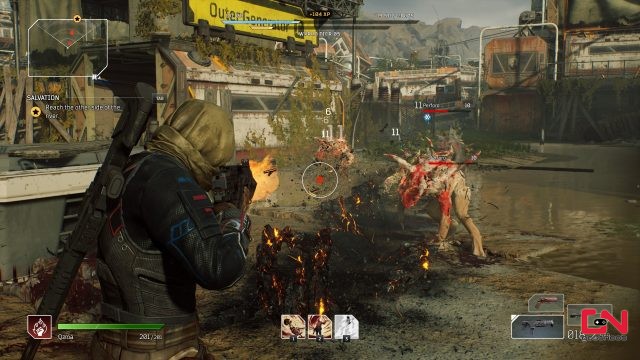 The initial impression with the game was not stellar due to numerous technical hiccups, but the worst ones, like the inability to log in, are ironed out. Some persist, though, like random crashing and lag in co-op, but developers promise it will be all soon sorted out. The bad impression no one can do squat about is the base of the game design.

Outriders is, basically, a cover-based corridor shooter with instanced arenas you can play solo or co-op, killing fixed waves of mobs and proceeding through a strictly linear route. No matter which class you play (there are four of them), you will soon realize that the game is extremely limited in scope and execution. You’ll shoot, you’ll loot, take cover, use powers, press E to clear the way, loot and shoot some more, complete the level, get a quest reward, take another and repeat the process with the non-existing to minimal variations.

Honestly, I felt like a test subject in a primate testing facility, the promising augmented ape who reached the digital stimulus testing phase. The white coats behind the glass wanted to see how many times I could complete the same basic level without spiking the electroencephalogram. Somehow, I had managed to stay calm for almost 20 hours, even if I was strongly tempted to scream out of the numbing boredom. 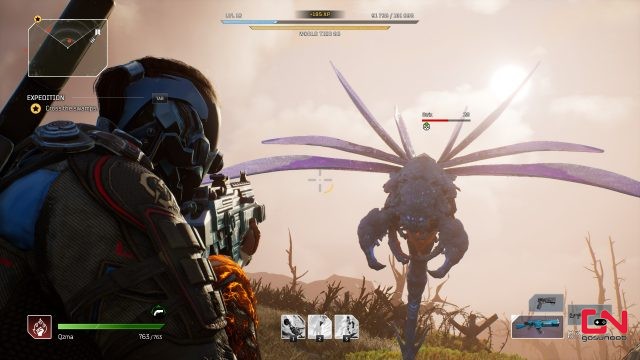 Looter shooters live and die by the loot, so using that logic alone, Outriders should already be buried. Every weapon and a piece of armor is just the shell that contains the specific mods, the real point of every loot piece. Those mods are interchangeable and offer all sorts of combat effects, buffs/debuffs, or passive boosts. The result is that loot is not exciting by itself. You won’t dream about that elusive farmable rifle like you did in Destiny when you can create or duplicate the desired effect in any weapon, provided you have the mods. In theory, this saves time and eliminates rng, but in the process, it removes the real connection you have with your hard-earned phat lewt. Yes, it offers the player greater freedom in fine-tuning the equipment in correlation with the talents, but all of that is unnecessary until the endgame.

The minor saving grace for Outriders is the said endgame. After killing the last boss and completing the base story, you get introduced to “expeditions” mode, which is a series of timed challenges made for perfecting your talent/gear build. In expeditions, you’ll be trying to beat the clock for a chance of better loot, either solo or in the group, which is much easier as the composition and number of enemies are the same. Each victory raises the challenge tier by one point, and after you reach tier 15 and gather 40.000 drop pod resources, you will get the opportunity to tackle the “real” final mission and fully complete the game. 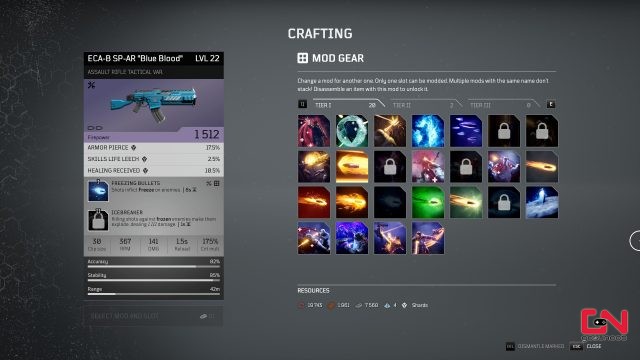 The bummer is that many people will give up long before they reach the endgame, bored to tears with the dull, generic story, samey missions, and uninspiring loot. If I weren’t reviewing the game, I would have given up after 5-6 hours after becoming apparent that the soul-crushing repetition is inescapable. There is no competitive multiplayer of any kind to break the mold.

Lastly, I would like to address one crucial inconsistency regarding terminology. People Can Fly insists that Outriders is not a live service game because it has a beginning and an end, with no future content planned. But the game requires an internet connection, it uses the remote infrastructure for matchmaking, (probably) loot and stats tracking, DRM, and who knows what else. It’s not even pausable when playing solo unless you play it on PC with a GeForce graphic card (Ansel photo mode pauses the game). Its front end is clearly “inspired” by Destiny with the down count for starting the session and general layout, look and feel of the menus. There are both live and service components here; the only thing missing is the promise of future updates. Is that promise the sole element that divides the worlds of live and live service games? What if the game sells well and People Can Fly or Square Enix decide to offer a single DLC, some equivalent of horse armor or something? Will that break the definition? In this case, proudly stating that the game is not the Live Service product serves to build the bona fides among the potential players, but those are just meaningless words in an ever-changing, global marketing quagmire. 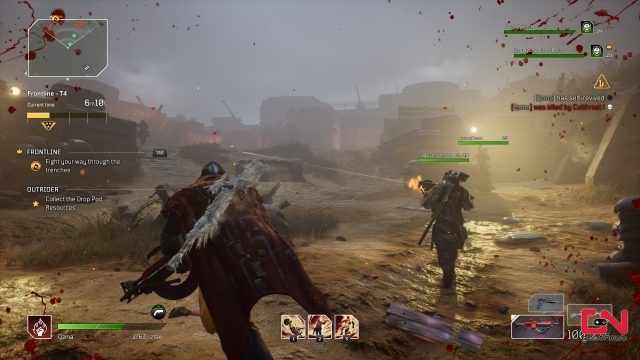 The bottom line is that you’ll get a mediocre, online-only shooter with the boring loot and passable but limited endgame for the full AAA price of 60 USD/EUR – Xbox Game Pass subscribers are the only exception as they can play it for free, but sadly, not on PC. There are far better options for loot and shoot-conscious players out there, and some of them, like Warframe, are even free(2play) on every platform. I would advise a hard pass for ol’ Outriders.

After reaching the endgame on Xbox Series X, I can do nothing but fully agree with my colleague’s review. I’ve barely managed to plow through the first third of the game without quitting. The game has terrible storytelling. Around the middle the story (although very cliché) and scenery change, making things at least bearable. However, the storytelling remains dreadful throughout. The exception are two or three side quests, one of which is a Deer Hunter reference (I love me some Walken). Shooting is subpar on console; it will take you at least 10 hours to get comfortable. The level design throughout the game is repetitive and basic. Arenas are mostly hallways with waves of enemies, and that goes on for 30 hours or so. Luckily, the game looks very good, so that shakes things up just a bit. In the end, you mostly stop using the cover mechanic and run around trying to avoid getting one-shot. This is inexcusable for a game that teaches you to constantly use cover for the first two thirds.

What I liked the most is the gear system, where you can apply mods to your stuff and change your build freely. This takes out a lot of the unnecessary grind seen in other loot games and lets you play the way you want to. I believe this is the most fair system I’ve seen in the genre, taking the gambling aspect out of the equation. It also removes any excitement. Unfortunately, this system fully kicks in about two thirds into the main campaign, and I can see many quitting before then.

The progression system with World Tier levels seems cool at first and works until you reach the later part of the campaign, at which point it becomes completely broken. The game turns into a meta where people play lower World Tiers (tiers 4-6) until they reach the endgame grind. This makes it very easy to run through. You then grind for gear by repeating content just to farm your World Tier and thereby level up your gear. As a result, the first playthrough is completely inconsequential and either boring or frustrating, depending on whether you are aware of the meta or not. In the end, it’s just bad game design.

People Can Fly has some good ideas in Outriders, but none of them work very well. I highly doubt that most people will be satisfied with what they got for their $60. Wait for a heavy discount and play only if you are a fan of the looter shooter genre and have friends with the same taste.