Most of the “simulator “games that pop up like fungus these days are simple cash grabs, developed in bulk in eastern Europe. They usually try to put a gamey twist on the mundane labor, counting on impulse purchases from bored teenagers in Germany. Sometimes they sell really well (Gas Station Simulator), but they quietly pass under the radar more often than not. The intrinsic value of most of those games is low, being the very definition of “consumable entertainment. ” You buy it, extract the novelty/comedic/shock value for a couple of hours, then put it away and never return.

PowerWash Simulator is different. The stupid amusement is a secondary objective to the chill it aims to introduce in the mind, longing for a therapeutic unwinding. It works like an adult coloring book, soothing the player with calming strokes and satisfying work of filling the void. Playing with a hose, you don’t merely clean the gunk and grime. You actively put color back into the world. 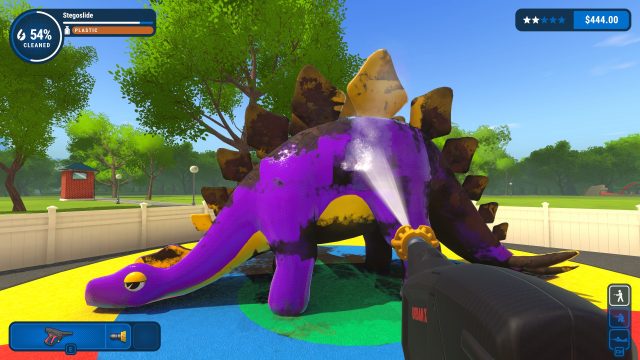 In PowerWash Simulator, you play as an entrepreneur starting their own washing business. The game offers several ways to play, the most important being the career mode, where you’ll earn money and performance stars. Each mission presents you with something to clean. You start small, power-washing the second-hand van you plan to use for the business and escalate from there. Houses, playgrounds, bungalows, amusement parks, and other locations are initially covered in the thick soot. Using the hose with a power washer, you’ll spray and scrape the grime in the manner of a first-person shooter. Your “gun” comes in four categories, varying in pressure power; You can fit it with various extensions, soap dispensers, and nozzles, modifying it on the fly for the task at hand.

The strategy in the cleaning business is derived from a simple compromise between the stream’s width and pressure. Covering the broader area in a single motion means lower pressure, necessitating multiple passes. More persistent gunk is more easily removed via a zero-degree nozzle spraying a tight, powerful stream, but it requires more precise aiming. Earning stars and money enables the purchase of more powerful washers and extensions, making your job easier over time. You can also use the funds for cosmetic purposes, helpful in impressing co-op partners if you prefer playing that way. 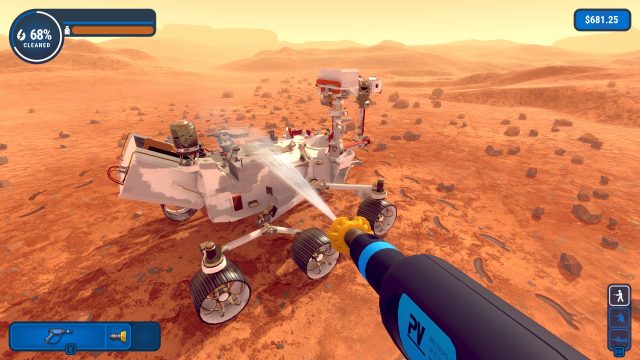 In career mode, there’s no time or any other job limit. You can take your sweet time hosing the dirt and listening to podcasts in the background. The game is not entirely devoid of challenge, though. Access will be a problem in some places, forcing you to crawl underneath or climb objects and use a specific nozzle/extension with the necessary range. Some complex structures have multiple parts that need to be individually cleaned, and sometimes, the sot is difficult to spot. Each level is considered complete when you reach 100%, which often feels like searching for the needle in a haystack. Fortunately, you can highlight any leftover dirt with a keystroke. Also, you can jump between jobs as you fit, returning to the unfinished one when you resummon the patience.

Besides career, you can try three other game modes. Specials give you the opportunity (pun intended) to clear Rover on the surface of Mars and a few other unique objects; Challenge is the opposite of a career, as the levels are time and water limited, forcing you to be quick and tactical. Lastly, there’s Free Play, where you can return to the previously completed locations and hose ’em all over again.

Missed the Couple of Spots 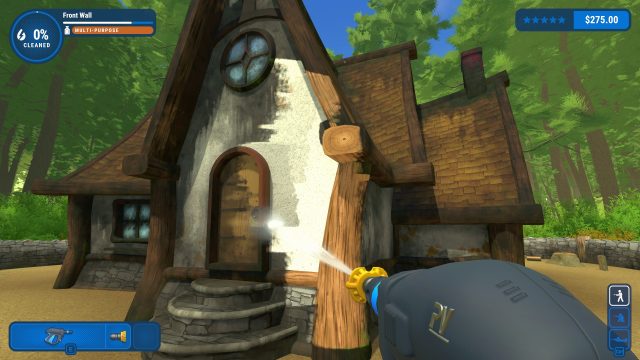 PowerWash Simulator may be chill incarnate, but it still suffers from a few rough spots and inconsistencies. The water physic feels kosher until the point of impact on the surface. Water doesn’t seem to be affected by gravity or the type of the material – it just cleans a bit of gunk and evaporates. It doesn’t slide down as it should, forcing you to hose the highest point first, as you would in an actual situation. Real water physics would have you cleaning from up to bottom, controlling the flow of dirt, and funneling it into some form of drainage. All of that simply doesn’t exist here, probably due to the limitations of the Unity engine.

Another thing I didn’t like was the combing required to advance from 99% to 100% in most locations. That last filthy percent is almost always on some stupid spot, such as the bottom side of the lowest plank on the wooden fence. Who on Earth would want to clean that and why? Supreme chill experienced up until that becomes the point of unnecessary friction. 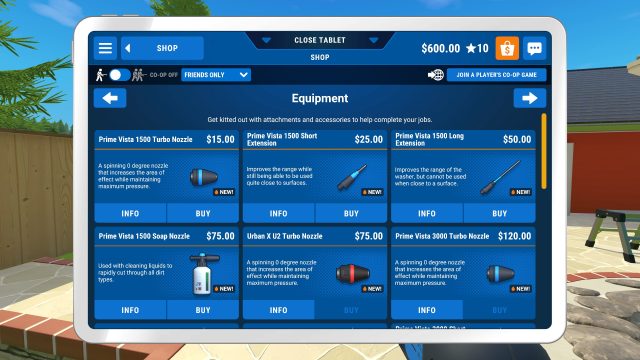 PowerWash Simulator is another seemingly stupid title that became a surprise hit overnight. You’ll either love or loathe this game, with a slim notch between those extremes. Therefore, I recommend trying it on Xbox Game Pass instead of investing 24,99 USD/EUR on the Steam version. Yeah, that price seems way off for this kind of game, but since Square Enix is the publisher, I’m anything but surprised.

For the people that become invested in it, the game will work on multiple levels. Most importantly, it will stimulate their subconscious layer, offering the tranquility rarely found in desktop gaming. I’ve never tried T’ai chi ch’üan or Yoga, but I bet both are not far off from the chill I found in PowerWash Simulator.