It would be easy to dismiss Raft as a poor man Subnautica. Both games are first-person survival adventures at sea, but Raft mostly happens on the surface. It has an anti-climatic start, and the first couple of hours are slow, grindy, and uneventful. It doesn’t try to explain its systems very hard, leaving the players to figure the stuff themselves. Raft also looks average-ish, lacking that sense of alien oceanic wonder that defined Subnautica. And yet, something prevents you from dropping it and moving on. The quiet sensation that greatness is just around the corner kicks in after a while, as if the game subconsciously dares you to stick around and wait for the things to get interesting. 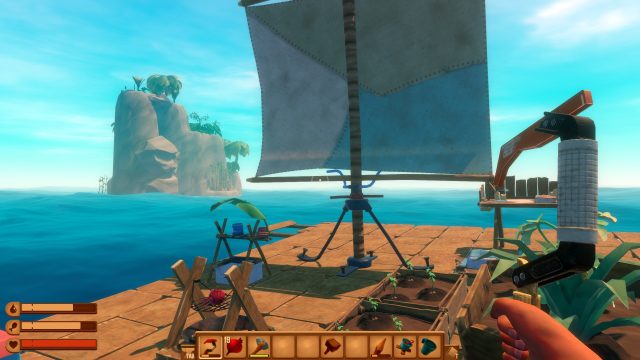 The game begins on a tiny wooden raft in the middle of the ocean. There’s no explanation about your predicament, except for a few scattered notes inside your log. Equipped with a plastic hook on a rope, you’ll try to catch floating debris and gather materials for expanding the makeshift refuge. You’ll deal with the wood, plastic, and palm leaves in the initial phase, ensuring you create enough real estate to build upon it. Soon you’ll stumble upon your first random island, just in time to stave off the hunger and thirst that took over. After wolfing the pineapples, watermelons, and mango, you’ll plant leftover seeds inside makeshift soil beds on a raft. You won’t get far without the source of food and water on the sea.

On a normal difficulty level, nutritional requirements seem a bit extreme. The food and water intake you’ll need to sustain on Raft require constant work until the later phase, when some of the grind could be automated. You will need to purify the seawater to drink it and water the crops, which in turn need to be defended against thieving seagulls. At the same time, you’ll need to keep an eye for the passing debris lest you run out of materials such as wood, used for construction and as a fuel for cooking and water purification. And, of course, there is a shark… 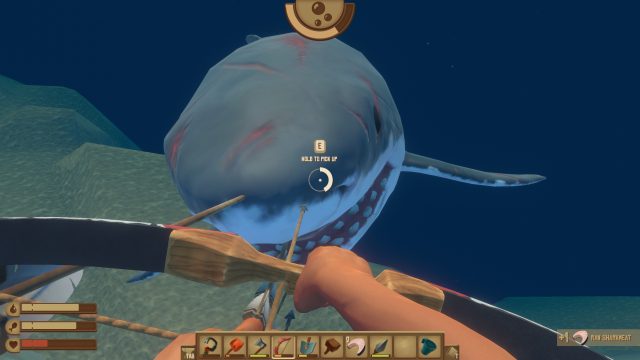 Besides hunger and thirst, the big predatory fish will be the third constant on the high seas. It will immediately attack you if you end up in the water and periodically gnaw at the wooden foundation of the raft. It will be a pain in the ass until you research and obtain bow and arrows and build the reinforced tiles at the edges of your floating home. Fighting the shark is not very difficult, but the successful kill buys you just a couple of minutes before another spawns. There’s no avoiding or ignoring the shark, as diving in shallow waters for metals, sand, and clay is a must, at least initially. On the plus side, slaying the shark yields nutritious meat you can grill or put in a stew, satisfying the hunger much better than any vegetable.

Bigger islands are home to dangerous terrestrial predators such as wild hogs and bears, as well as llamas and other animals you can domesticate. Researching and crafting a net launcher, catching goat or chicken, and putting it inside a big livestock pen provides you with milk, meat, or wool. Trust me, you’ll need that wool later. Fishing is another potential food source, provided you have patience for it or play in co-op. A solo player will have a hard time relaxing and angling when multiple things require attention simultaneously.

Triangulation is the Key 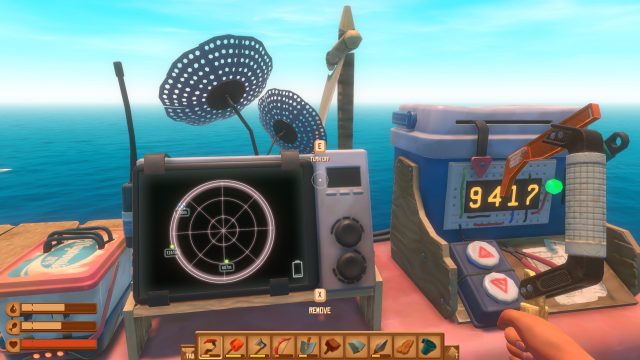 Pure survival is not the sole objective in the Raft. There’s a solid, slow-burning storyline that reaches for the genuinely unexpected highs. The story proper begins with constructing the radio receiver, three antennas, and at least one battery. Your raft must also be spacious enough to place those antennas apart and on elevated platforms. Using the radio equipment, you will navigate to the hot spots on the sea that offer clues about your mission. Occasionally, you’ll meet NPC-s, unlocking them for subsequent play sessions.

You can find plenty of resources in each story location and at least one blueprint for some cool new stuff. The first handy gizmo I found was the plan for the wearable flashlight. I used to fiddle my thumbs at night, usually anchored near the shore of some island. Equipped with a simple headlight, I could perform night dives in search of metals, unafraid of the jaws that awaited me in the dark. It’s small things that make life truly worth living. 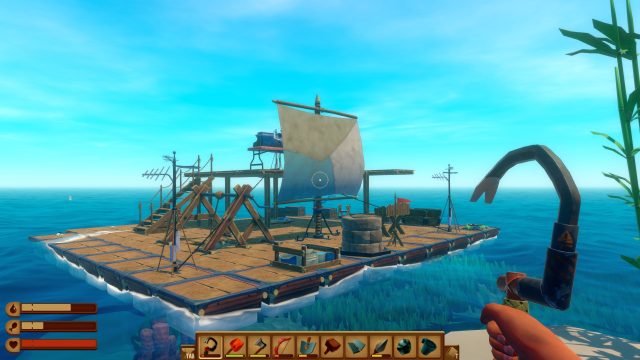 If pushed to find something I don’t like here, that would be the fact that Raft doesn’t want you to relax. At least not for the first dozen hours, when sufficient automation takes over the most mundane chores. I wished for a button to turn off that damned shark for a few minutes, to fish and relax in the setting sun. There are also those insanely fast-ticking thirst and hunger gauges. On the normal difficulty level, worrying about sustenance is approx 60% of gameplay. Setting the game on “easy” remedies that, but it also eliminates the penalty for dying.

But none of that really matters. The true greatness of Raft lies in the multi-fold escalation. From the very humble beginnings, clueless and poor, you’ll gradually expand your horizons. Unlocking the new stuff and building and customizing your raft offer a palpable sense of progress. The storyline and your role in it also dramatically expand, raising the stakes from individual survival to something much more profound. Raft is, simply put, one of those rare games that pleasantly surprise you on every level.

NEXT POSTWarzone Rose 3.0 Skin, How to Unlock