The Red Strings Club is a sorta-point-and-click cyberpunk romp from Deconstructeam, makers of Gods Will Be Watching and a plethora of other, narrative-focused games. It’s full of malevolent corporations, cocky console cowboys, cold neon, perpetual rain and lingering questions about the nature of man. But is it worth its weight in neural implants?

My first impression wasn’t good. After a delicious short scene that sets the tone, it segues into a clumsy opening, with heaps of exposition being dumped on the player’s head like a truckful of bricks. The introduction gets ahead of itself, the main characters on an as-you-know spree, in which they stumble over themselves to explain the daily realities of their universe to the player. It’s short – only the first fifteen or so minutes are obsessed with letting you in on every little detail.

It takes time to find its footing, but once it does, it becomes a truly beautiful thing. During your time with the game, you’ll switch between Brandeis, a headstrong hacker, Donovan, a bartender-cum-information-broker and Akara, a rogue empathy-android who’s also a sculptor. The three of them are dragged into a kind of a mega-conspiracy, and you’ll tag along as they put their plan to foil it into action.

I’m not much for plots – as any “serious” fiction snob will tell you, characters are king – but this one packs quite a punch. Near the end, it pulled the rug from under me so swiftly and carelessly that I just sat at my desk for a while, trying to pull myself together. Again, the characters are partially responsible for this. They’re surprisingly human, relatable and easy to care for. Their relationships are complex, intricate and sometimes defy common sense. A lot of their heft comes from the seemingly inconsequential conversations – the playful banter between Brandeis and Donovan, the profound talks Donovan has with Akara, the way they touch upon heavy themes, like what it means to be human, in a careless and calm way.

The conversations are interspersed with several mini-games – mixing drinks, sculpting cybernetic enhancements from biomass and dialing an ancient phone. There’s lots of physicality to them – you’re constantly moving things, touching, pressing, picking up and dropping. It gives things a pleasant weight, and a dose of palpability to the world. They’re not really challenging – they’re just there to add color.

The real challenge are the conversations. You’ll often get to choose answers, questions and the course of action of your little group. The mini-games are deftly woven into the dialogues, but talking is the main verb here. The discussions quickly turn into short, tense games of cat and mouse – you need to get information out of the person you’re talking to, without showing your hand. You also need to butter them up before they’ll talk, by choosing the right approach. 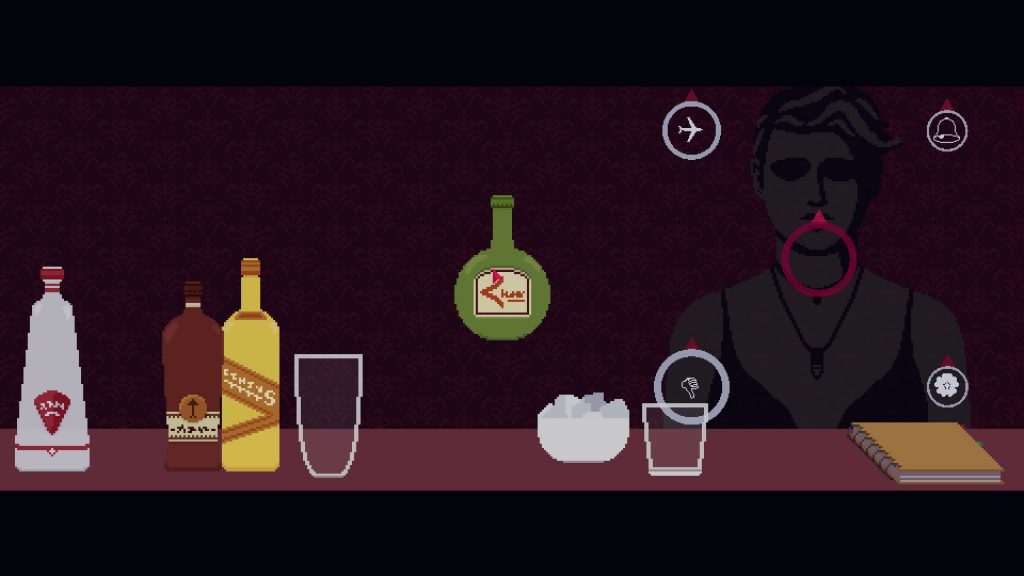 The most wonderful thing about them is that the game lets you screw up. It lets you make wrong choices, and it forces you to live with the consequences, as it autosaves at regular intervals. If you’re the kind of person who can let go and accept a mistake, who can savour regret, you’ll enjoy it. Which ties in splendidly with one of the game’s themes, which is the question whether happy emotions are the only good emotions.

It’s pretty obvious from the start that your choices will not affect the destination, but they sure as hell will define your journey. The game will give you a tool that lets you rewind conversations at some point, but only if you perform well. Since the outcome doesn’t change, I’d advise against rewinding, and replaying the game as well. It only takes away from the experience, at least if done right away. You’ll have far too much knowledge about what’s going on, which will color your interactions. Ignore the achievements. Play through it once, then leave it aside. Trust me.

We’ve laced the review with images, but sadly, images don’t do the game justice. If I had to describe the way The Red Strings Club looks with one word, I’d say “vibrant”. Yes, the pixel art is crisp and all, but it’s the animations that really make it shine. Every scene is alive with movement – the flickering of a neon sign, the smoke from a cigarette, the floating of a buoy, the way Brandeis’ tie and neural jack flutter in the wind. The audio design is equally superb – sparse, but meticulous. I don’t think the clinking of ice cubes against glass sounds this good even in real life. The atmosphere is tied together by an amazing soundtrack by Fingerspit, in what might just be her best work yet. Just listen to the melancholy, conversational tune from the reveal trailer.

If you have any interest in games as a storytelling medium, do yourself a favor and get The Red Strings Club. Like the best cyberpunk, it’s a tale about people, even amidst all the chrome and neon, a deeply human story with endearing, believable characters, not to mention a beautiful marriage of narrative and systems. It’s what point and click adventures should’ve morphed into, instead of doing that nasty thing they do.

PREVIOUS POSTThey Are Billions Thanatos Unit – How to Get & Use