The eighties are universally regarded as an era of global prosperity, but few are aware that the world had few close existential calls during that period. Able Archer 83 was a NATO exercise in Western Europe, simulating the conflict escalation up to DEFCON 1 and nuclear war. The Soviet gerontocracy presumed that those manoeuvers were a ruse for launching a surprise attack on the eastern block. They increased the readiness to the highest level, prepping the nuclear arsenal for their own pre-emptive attack. Fortunately, common sense prevailed, and the situation was de-escalated. All that confusion and anger were rather beautifully portrayed in “99 lufballons”, a song by west german band Nena.

A few years later, we had another close shave, this time related to the breakup of the USSR. The peaceful dissolution of the Soviet Union could have easily turned into a hot war, but cooler heads, once again, had the final say. 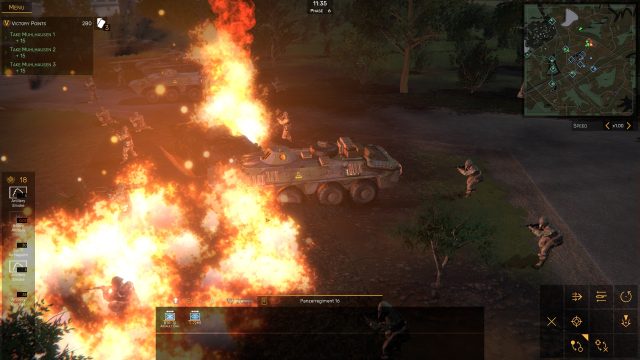 But what would happen if they didn’t? Most western military scholars agree that World War III’s initial, conventional phase would have started with Soviet tanks pouring through Fulda Gap towards Frankfurt. Since Datasoft’s Theatre Europe (1985, ZX Spectrum/C-64), many games in the last few decades have explored that scenario. Fresh examples include Wargame: European Escalation, Wargame: AirLand Battle, and Warno by Eugen Systems. There was also World in Conflict, a little less serious but still excellent RTS that came a few years before the first Wargame.

Regiments, a real-time tactical wargame, is a pretty shameless clone of Eugen’s flagship titles. The publisher is a newly resurgent MicroProse, a label that rose from the ashes after a couple of decades of hibernation. But same as resurrected Nokia, this isn’t MicroProse from the good old days. Their recent portfolio is a mixed bag, with brilliant but bug-ridden High Fleet followed by abysmal Carrier Command 2. And now this “appropriation”, which absolutely looks and feels like a mod for Wargame: AirLand battle. They will have to do better than this to become worthy of the legend associated with the name. 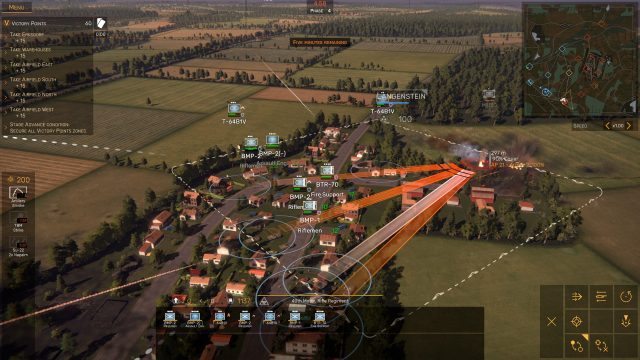 It’s 1989 in Regiments, and it’s war o’clock on the border between East and West Germany. Through several multi-stage operations, you’ll have the opportunity to explore the escalation from both sides of the conflict. From the initial skirmish to the major offensive maneuvers, you’ll rotate between NATO and Warsaw Pact HQ-s, directing the important tactical manoeuvers in the theatre of operations. The keyword here is “tactical” since you’ll be commanding regimental-sized forces, at least in theory. Authentic OOB (order of battle) is modified to minimize micromanagement, so those “regiments” are, at most, reinforced battalions comprising several hundred personnel.

Regiments in this game are structured similarly to Wehrmacht Kampfgruppen, if you are more familiar with WWII combat formations. Each consist of several elements: recce, armored, mechanized infantry, artillery, assault engineers, etc. You have limited opportunity to customize your forces before the battle. The main regimental body is predetermined, but you can augment it by adding independent companies such as heavy tanks or command elements by investing in Operational Authority points. You can also use those to improve the deployment pool, enabling more forces in the field at any given time. Points are helpful in altering a few other attributes, such as lowering off-map artillery/close air support cooldowns; or purchasing increased engineering support, which is indispensable for placing pillboxes and obstacles in defensive missions.

Competent Clone, but a Clone Nevertheless 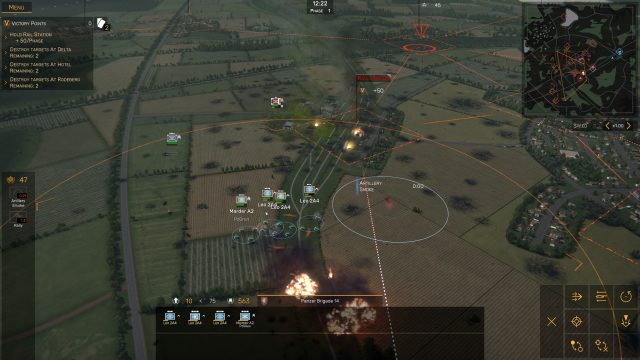 Once the battle is joined, you’ll notice that the Regiments look stunningly similar to Eugen’s Wargames. It’s pretty impressive that the developer managed to clone Wargame’s look and feel using Unity instead of Eugen’s proprietary IRISZOOM engine. The most significant difference, gameplay-wise, is that you can’t control individual vehicles here. The smallest tactical unit is the platoon; in the case of, say, mechanized infantry, it’s 2-4 vehicles with 20+ soldiers. Besides simplifying command, it presents you with a tactical choice after you suffer casualties. Will you press on with an understrength platoon, risking total write-off? Or pull it back for refit, preserving accumulated XP? Enemy AI usually does a very poor job of finishing your stragglers, so with a bit of clever positioning, you can postpone pullback in many cases.

Maneuvering units, calling for off-map support, getting points for destroying the enemy, and other systems work identically, so if you have previous experience with the Wargame series, you’ll benefit from instant familiarity. Chasing the objectives on the map enables you to accumulate OP points. You’ll be using those between phases to patch up the force, upgrade reinforcing companies, or further enhance operational capabilities.

Nothing New under the Sun 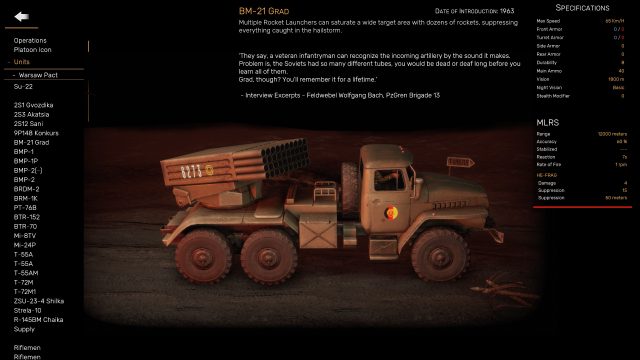 Regiments is an okay-ish tactical wargame that, sadly, doesn’t bring anything new to the table. It stands on the shoulders of giants, shamelessly ripping off the well-established series from Eugen Systems. There was an opportunity to augment that formula and chart a unique path. For example, the developer could have implemented terrain elevations and thus brought the thing a bit close to reality. Or electronic warfare/jamming, a significant part of battlefield doctrines since Vietnam.

But they didn’t. They also decided to omit multiplayer, which is a damn shame. Eugen’s Wargames have a vibrant multiplayer community that ensures the core audience maintains its interest in the series. A Multiplayer audience buys the DLCs, enabling more content development. Regiments don’t have/will not have any of that. There is a skirmish mode, but that is hardly a consolation.

If you are desperately searching for any new wargame dealing with the start of WWIII in Europe, Regiments might satisfy your thirst for ten+ hours. But the Wargame series is still a far superior choice that will last you longer.

NEXT POSTMadden 23 Release Date, Time & How to Play Early Access