After a rather disappointing Resident Evil 3, a half-assed remake of a pretty solid Resident Evil 3: Nemesis from 1999, it’s time for the much better main event. Resident Evil Village is the direct sequel to Resident Evil 7 Biohazard, which successfully rebooted this progenitor survival horror gaming series for modern gaming platforms. 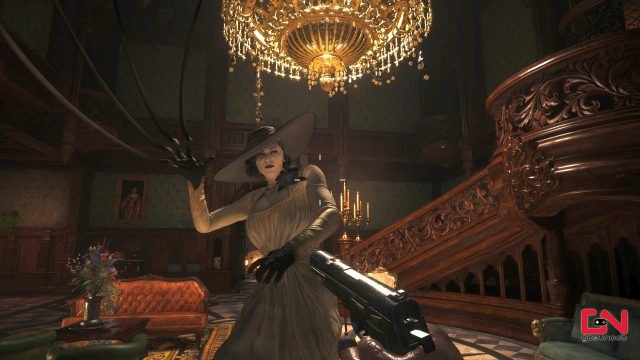 To properly appreciate Resident Evil games, you need to be somewhat invested in their mythology and have a very laid-back attitude about its seriousness. Talking about RE stuff to the gaming audience is like preaching to the choir, as we, the gamers, have insider understanding and pre-baked expectations. Try to loudly recite the names of every Resident Evil game to some civilian detached from gamesphere, or explain few plotlines and see the look on their faces. I’ve seen the reverence that some gaming journalists apply to the series narrative, heroes, villains, and continuity, and I can honestly say that amount of displayed cringe is impressive. OMG, Chris Redfield is on the cover, but he’s EVIL! Or is he? Oh, but they probably mess with our heads! Resident Evil titles are the gaming equivalent of straight-to-VHS movies with AAA production values, riddled with ultra stupid plots but blessed with addictive gameplay and carefully curated atmospheric pieces. Some games are indeed art, but RE games are just the skillfully crafted interactive vessels for tension-based entertainment. They are pulp fiction, even if they are good like Resident Evil Village is. 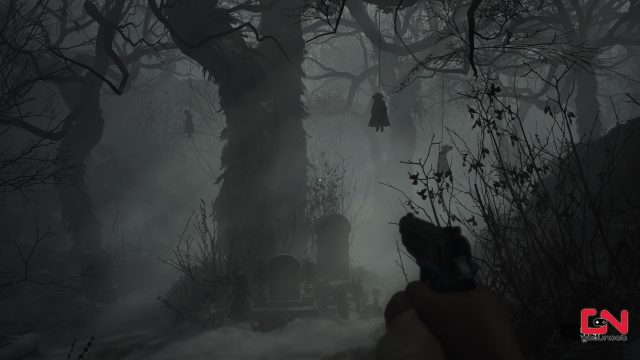 To understand the context of the initial setup, you should watch the detailed recap before you engage with the Village – even if you had played RE7 before, a full refresher could be beneficial. Following the conclusion of Resident Evil 7, we are introduced to the Winters family living under the radar in Eastern Europe. Ethan and Mia have a baby daughter; everything radiates harmony and bliss up until the sudden catastrophe. Chris Redfield, of all people, barges in with the masked operators in tow, executes Mia, subdues Ethan, and captures baby Rose… Guess he’s evil after all? Or is he? Confused, wounded, and half-frozen, Ethan wakes up at the outskirts of a big, imposing castle, with the picturesque village at its feet. Predictably, hell soon breaks loose. Starved of resources, mad with grief and fear for his baby daughter, Ethan’s stakes are higher than ever before.

If you didn’t spend last year in prison or under a rock, you probably know about remarkable lady Dimitrescu, three meter tall vampiress that becomes a focal point for RE Village overnight. She captured all the buzz and dominated the gaming zeitgeist ever since we laid our eyes on her, probably due to the repressed Oedipal complex running wild in the young adult male audience. You will have to deal with D and her daughters in the first big section of the game, avoiding her like Mr.X from Resident Evil 2 until you get to chance to fight her in the chapter’s conclusion. She is charismatic, driven, cruel, and blasé – it’s a crying shame that you are deprived of her presence for the rest of the story. 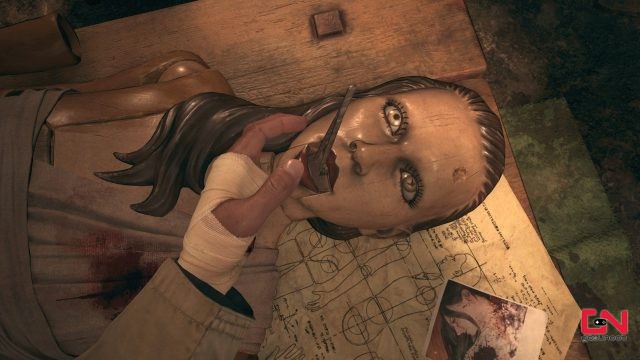 The main villain, Mother Miranda, is a generic matron archetype baddie, introduced properly near the end but bland enough to be forgotten mere minutes after the credits roll. Apart from lady D, Her other macabre “children” and their domains are less interesting, although Beneviento dollhouse is definitely the creepiest place in the whole Resident Evil landscape of horrors. Don’t get me wrong, they are all masterfully created, but the lady Dimitrescu is casting a mighty shadow over everything else. Overall, the Baker family from RE7 was scarier, perhaps because they represent the down-to-earth mutation/deviation from normality, without interwoven bits of fairy tales to mitigate the grotesque.

On the normal difficulty level, the game seems easier than Resident Evil 7. Munitions and other resources are still not abundant, but I didn’t lack anything at any time. Boss fights are also a tad simpler, and the general gunplay seems more robust. Regarding enemies, you’ll fight mostly Lycans and animated corpses most of the time, basically zombies with fantasy textures. There are plenty of puzzles, both optional and tied to the main story, but not a single one gave me a tough time. If you are a Resident Evil veteran, expect a smooth sailing to the end, which should take you between 11 and 13 hours, depending on how much you sniff around and deviate from the main path. 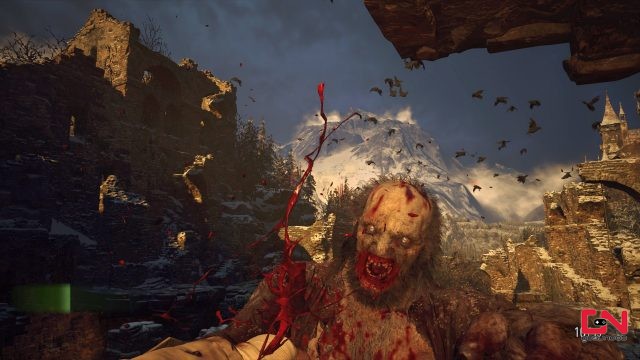 Resident Evil Village is a technical masterpiece. I played the game on PlayStation 5, and I was blown away by the incredible level of detail and the fact that the developer didn’t separate Ray Tracing and 60 fps gameplay – they are combined in a single, gloriously smooth package best experienced on an HDR-capable screen. Gosh, the HDR is incredible… The omnipresent, soft golden light from ancient candelabra and candles littering the castle Dimitrescu creates a dreamlike, eerie atmosphere, and the reflections on lacquered woodwork are pure awesomeness. The game is beautiful and, more importantly, it works like a charm, without a single hiccup – it has become a habit of many developers to launch patchable excuses instead of properly finished games, but Resident Evil Village is an honest to God, old-school complete product. It’s refreshing to be able to enjoy something without even a bit of worry about technicalities.

Now, I’m about to disregard my initial advice about not taking the Resident Evil mythos seriously and offer a somewhat different perspective about Village, closely related to my Eastern European roots… Capcom had sent mixed messages regarding the initial geographical setup, deliberately omitting to mention Romania and vampires and offering some bullshit explanation about the pronunciation of Lady Dimitrescu’s surname. No, Capcom, lady Dimitrescu is not pronounced DimitresC, but DimitrescU. I have several Romanian channels in my cable TV package, and I’m sure that the actual Romanians know their onomastics better than you. 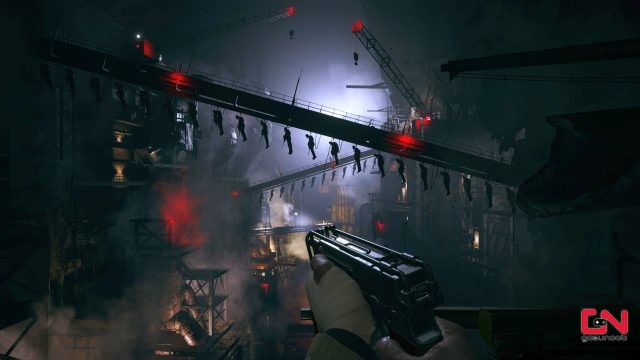 Redneck Louisiana from Resident Evil 7 was pretty on the money regarding the localization and, yes, stereotype characterization, so why the confusion regarding Romania, vampires, and correct pronunciations? You collect Lei in the game, after all, which is actual Romanian currency, and the village you prowl is full of little details that offer little doubt about the locale (Orthodox Christian icons in most of the houses, for example).

Why chose an unusual, eastern European setting and then decide to embrace it with only one arm? Why not fully bite into the weirdness of the fantastic Vallachian folklore these parts are well known for? Why put global horror archetypes like a haunted dollhouse and grim dieselpunk factory in the land of Căpcăun, Marțolea, and Muma Pădurii? I mean, Capcom HAD a powerful hook in the form of Lady Dimitrescu, and this is the Resident Evil game – they could have literary went full berserk experimental with the local mythology, and people would still buy the game like it’s their last. Heck, It might sell even better if it offered fresh, seldom seen folk horror tropes. Remember Witcher? It was Giga popular precisely because of the unique setting it introduced to the western audiences. Resident Evil Village feels like a missed opportunity in that regard. 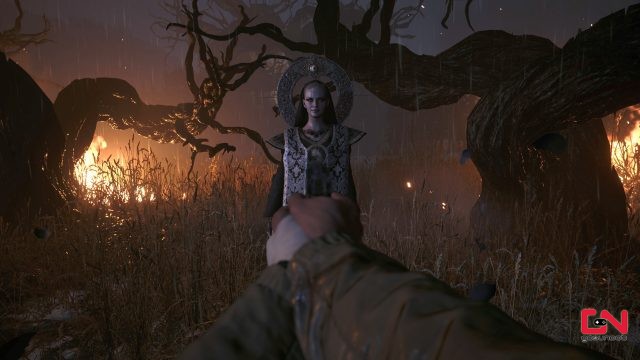 All nitpicking aside, Resident Evil Village is a superb survival horror experience. It may not be the best Resident Evil game ever (that’s still the unforgettable Resident Evil 4), but it’s still in the top five experiences this rich serial offered through the decades.