Perhaps you are familiar with so-called “Monke” memes? Diligent chroniclers from knowyourmeme.com state that “Return to Monke encompasses a series of memes closely associated with anarcho-primitivism that romanticize a simplistic archaic lifestyle, with apes (often referred to as monkeys or monkes) serving as a symbolic representation of that lifestyle“. Monkeys. Simplistic archaic lifestyle. Nostalgia… It rings a powerful gong inside my noggin that takes me back to the happy and carefree summer of 1990. I spent it with my Amiga 500, transfixed on the best classic adventure game I had ever played. The Secret of Monkey Island was a beautiful, witty, engrossing adventure game that remained one of my all-time favorites. I was a child but perfectly capable of assessing that I was dealing with something profoundly unique.

Over the last three decades, there were four more Monkey Island games, but only Monkey Island 2: LeChuck’s Revenge got made by the original talent. LucasArts clutched the IP, save for the brief stint when Telltale Games made Tales of Monkey Island. When Disney acquired LucasArts in 2012, Monkey Island became part of their massive portfolio. A decade of silence followed.

Getting the Band Back Together 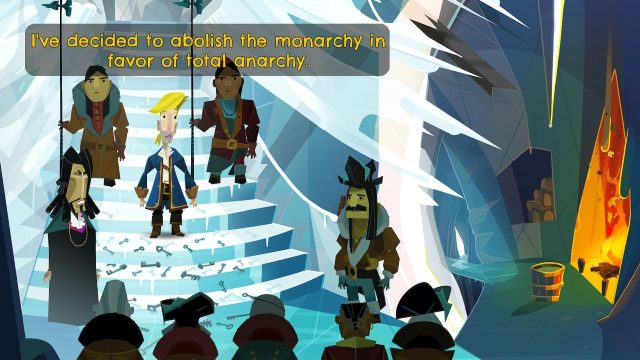 Monkey Island was safely buried in some folder until Ron Gilbert, the original designer, wished to have another go with it. His original vision concluded with a massive cliffhanger; the ending of LeChuck’s Revenge was never going to represent a definitive conclusion, but since he left LucasArts, he didn’t have any input on the sequels. Until now. Disney people were forthcoming with the license, so Mr. Gilbert got his chance to revisit the island that jumpstarted his career. He managed to gather most of the key people from back then, including Dave Grossman (lead programmer) and the composers of the original score. Tim Schafer is missing in action, but it was to be expected.

Return to Monkey Island is a direct sequel to Monkey Island 2: LeChuck’s Revenge, but the subsequent games still represent the series’ canon. At least to some extent – Ron Gilbert was purposely ambiguous about what is kosher and what isn’t. Obviously, he didn’t want to explicitly dismiss other people’s work, but it shouldn’t stop us from reading between the lines. For all intents and purposes, this IS the first true Monkey Island game since 1991, and I’ll treat it as such. 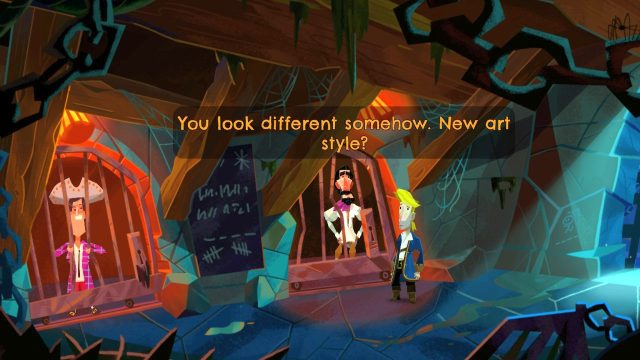 So, is it any good? You bet! Puzzles, humor, music, characters, plot, dialogue, and the rest ooze the irresistible charm of old. But not everything tries to stimulate your nostalgia receptors. Besides the new interface, the artistic style is the most significant change compared to every other Monkey Island game. When revealed in April, this radically different visual style riled up some people on the internet, causing needles ruckus. Personally, I found it unique and very pleasing to the eye. Ron and the gang initially planned for pixel art GFX but, fortunately, abandoned that option in the early concept phase. Pixel art had its run, both in the nineties and in the resurgent phase in the early XXI century. It’s high time to permanently retire.

Legacy Monkey Island games were designed around the mouse as the primary interface, but as a modern multiplatform title, Return had to diversify. Gone is the ancient concept of combining verbs with the objects on the screen. Even a simple context-sensitive cursor from The Secret of Monkey Island: Special Edition (2009) was abandoned. Developers opted for a simple system of proximity-triggered interaction spots in every scene. You browse those with a mouse or thumbstick (I played the game on Switch), which initiates the narrative response. Interaction with the objects from the inventory works the same way. The classic nature of point&click adventures is still there; it’s just a bit more player-friendly. 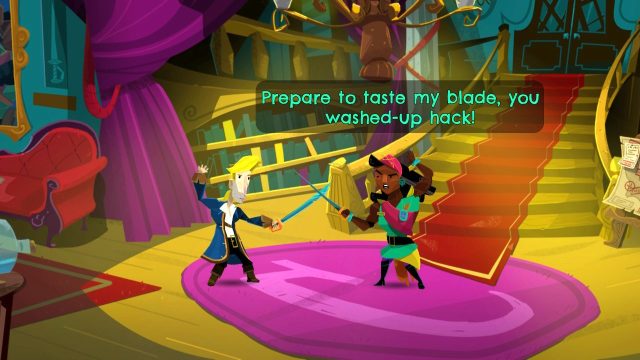 Return to Monkey Island tries to tie several loose ends from the original game and its sequel. Guybrush Threepwood returns to Mêlée Island, determined to revisit the chief mystery of his young pirate days. Nobody ever found the elusive secret of Monkey Island, but he’s convinced that attemptees weren’t persistent enough. As it happens, his old nemesis, zombie pirate LeChuck has the same idea. And the only available ship in these waters. You might start to glimpse where this is going.

The island is under new management, in both official and unofficial sense. Governed by swordmaster Carla, it slowly phased out the old guard pirates; in their stead, there’s a trio of young, commercially oriented pirate entrepreneurs who never heard about the legendary exploits of our hero.

Through five chapters wildly varying in length, Guybrush will roam the archipelago, dealing with (literal) ghosts of his past and people near and dear to him. Elaine Marley, Carla, LeChuck, Murray the Demonic Talking Skull, Stan, and even old Herman Toothroot have roles to play. Similarly to LeChuck Revenge, you can experience the game in casual or hard mode. To paraphrase Nvidia, the former is the way it’s meant to be played, as the casual (formerly “lite” mode) is aimed at the casual audience. They omitted the jab about “game reviewers” this time. 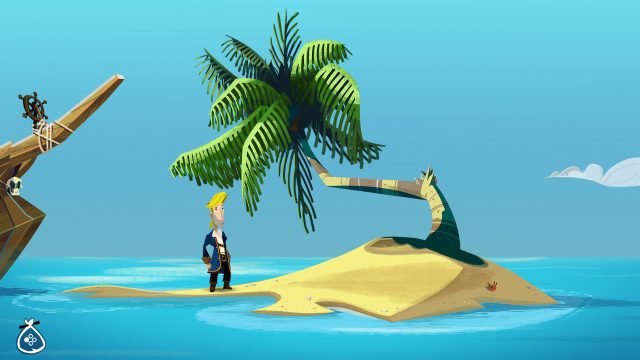 My Return to Monkey Island was a pretty enjoyable experience, albeit relatively brief. I completed the game in one hectic weekend day of adventuring, which left me wanting more. I probably subconsciously expected the game to dominate my (late) summer as it did all those years ago. But it didn’t. It felt like one night stand compared to the full seasonal fling if using the sex analogy doesn’t diminish the innocent memory of the original.

Is there something I don’t like here, apart from ending credits coming too soon? The built-in hints system is an unnecessary temptation, existing only to test the player’s resilience. It’s waaaaay easier to consult it than to search for solutions on the internet, and I suppose many people, temporarily stuck on something, will take the easy way out. Also, some key characters were much blander than they used to. Elaine Marley acts and talks like a generic placeholder instead of the headstrong woman we fondly remember. But those are relatively minor complaints in an otherwise excellent game.

NEXT POSTModern Warfare 2 Snaking, How to Snake in MW2