It has been eight years since Saints Row: Gat out of Hell, a stand-alone expansion for Saints Row IV. The world had massively changed since the last entry in that goofy open-world franchise, mainly for the worse. The social media inquisition now dictates the limits of permissible humor, reacting in a manner of soviet politburo to any artist or media who dares to defy the ideology. It’s a really shitty environment for rebooting silly, provocative, and sometimes casually insulting open-world action game series.

Yes, Saints Row (2022) is castrated like a chief eunuch in Abbasid Caliphate circa 750 AD. The developers made triply sure that the game follows the repressive zeitgeist to the letter, eliminating the over-the-top bullshit that made earlier games so remarkable. Volition never had the budget or manpower to seriously compete with Rockstar, so Saints Row games HAD to be semi-moronic to stand out. Take that away, and what remains? Mostly generic action sandbox you’ll forget in a week. Welcome to Saints Row.

The Power of Friendship 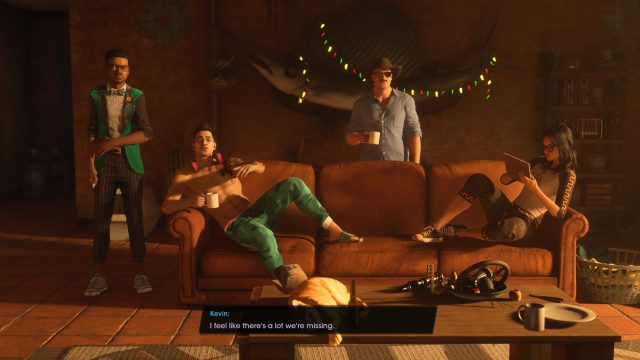 Haha, look at us writing the conclusion already! But seriously, if you expected reboot to out-twist the zany predecessors, you haven’t been paying attention. But developers had to conjure some kind of “edgy” plot to at least try to preserve some Saints’ legacy. Since there’s no topping the story of a crime boss who becomes American president, fights aliens, and ends up in Hell dealing with Satan and his daughter, they introduced us to the millennial criminals.

The criminal startup gang of Santo Ileso, a fictional urban hybrid of Las Vegas and San Francisco, is just four roommates with difficulty paying rent. Through the power of friendship, they will use their gangland connections and, with some luck and bravado, establish themselves as Saints, a brand new criminal enterprise. Headquartered in an old condemned church on the city’s outskirts, the gang will vie for supremacy against the established criminal element of Santo Ileso.

Competing with Los Panteros, The Idols, and The Marshall Industries is a mostly linear affair. During the campaign, you will gradually mow down the leaders of your opposition, and after a predictable twist near the end, come on top. Literary, you’ll end the story on the top of the highest skyscraper in Santo Ileso, basking in the sunset. The story component lasts fifteen plus hours, depending on the optional stuff you tackle. But fret not; plenty of things to do after the ending credits. 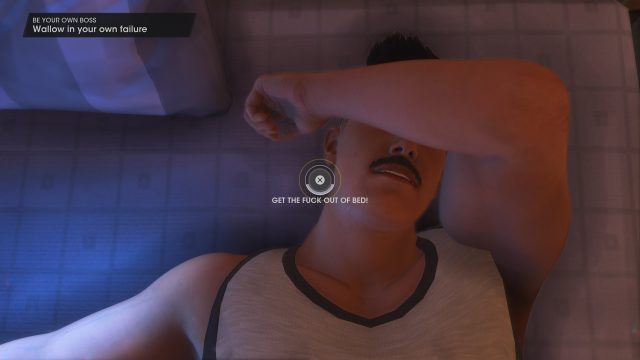 In Saints Row, as before, you play as a richly customizable boss. Compared to the rest of the cast, the boss is actually quite an exciting fellow (or gal), full of solid dialogue and snappy one-liners. Boss accumulates XP and levels up, gradually unlocking the tiered perks and options to upgrade weapons. Although devs massively dialed down superhero antics of previous games, you can still use some supernatural-ish stuff such as a fiery fist or HP vampirism. The rest of the gang, present in most story missions, are driven by AI and mainly exist as cinematic flavor.

Shooting and driving action are mostly OK if unremarkable. I liked the option to fight from the car’s roof when riding shotgun. A sufficiently leveled-up character is a combat powerhouse and won’t have any problems in the mid or later game. Challenge really could use some beefing-up. If you decide to play in co-op, it becomes easy to the point of absurdity. 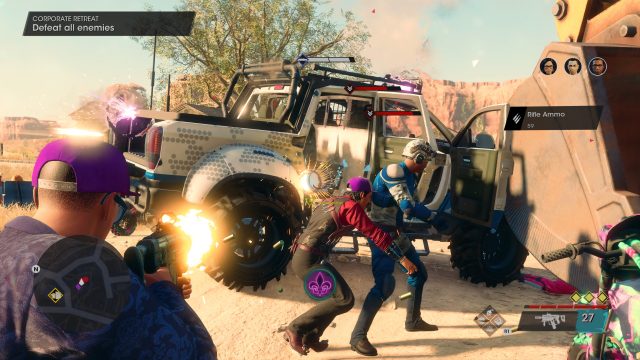 Besides shooting and driving action present in every urban sandbox since the first GTA, you also have a decision-making segment regarding the growth of your criminal enterprise. Early in the campaign, you’ll unlock the option to set up “business” ventures with a legal front end, such as a medical clinic dedicated to insurance fraud. Maybe a startup incubator ideal for testing stolen weapon tech is more of your taste? Or perhaps a food truck/drug delivery enterprise? When you build each venture, you’ll unlock its “establishing” questline. When completed, it will generate steady income.

Some of those quests are quite grindy and boring. REPO depot missions, for example, consist of slowly tugging the vehicles across the city. Yawn. The same goes for insurance frauds, where you need to jump headfirst into traffic to rack-up monetary claims; the first time is kinda fun, but since you need to repeat that same fraud in every district, it becomes a significant drag. But ventures are the easiest way to earn money. You’ll need the cash for further expansion and purchasing weapon upgrades, clothing, etc. Weapon tiers get pretty expensive near the end, and after you finish the story, you’ll get access to million dollar shop that’ll help you part with accumulated money. 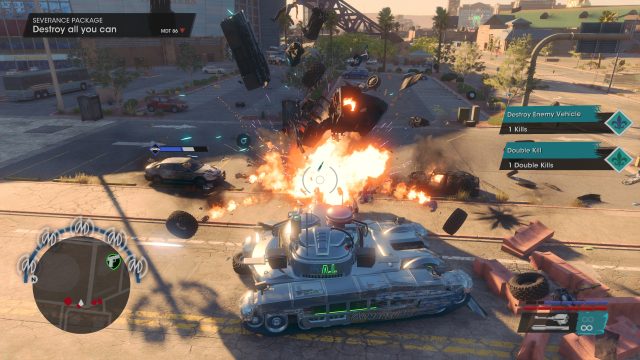 Is there anything genuinely remarkable in rebooted Saints Row? Storytelling is mostly bland, but some quests stand out. The LARP (Live Action Role Playing) questline is the Saints Row of old. Helping your friend Eli to get recruited into the LARP guild dedicated to Mad Max-esque post-apocalyptic fun and getting slowly sucked into role-playing with cardboard armor and toy weapons is a fun and engaging experience. But the rest of the content doesn’t compare favorably to this exception.

Saints Row is buggy, at least the Playstation 5 review version I’ve got a few days before official release. Getting stuck inside the cutscene, launching a helicopter ride with the camera auto-zoomed to the max, or straight-up crashing were common occurrences. The game needs a patch or four before it is ready for prime time.

So, in conclusion, I think it’s really pointless paying sixty bucks for Saints Row, but that’s just me. If you absolutely, positively crave a fresh crime sandbox, you should consider it, but I anticipate a significant discount soon. Patterns of commercial mediocrity are predictable.