Scorn is a horror puzzle adventure inspired by the disturbingly glorious work of H.R. Giger and Zdzisław Beksiński. I had to google that second guy but wasn’t disappointed. Sinews, tissue, walls made of meat, and synergy of flesh and machines are the cornerstones of its visual identity; Slurping noises, wet sounds, and distant screams fill the aural portfolio. Aesthetics are profoundly creepy, designed to distress, unsettle and put the player on the back foot. Developers masterfully set the ominous bio-terror tone, long absent from the horror genre obsessed with mental institutions, Lovecraft, and dark family secrets.

Unfortunately, that’s about the only thing they nailed. Scorn fell short of most of my expectations. It ended up being far more frustrating than disturbing for the right reasons. Technical issues also didn’t help – near the end of the story, I honestly couldn’t differentiate between bugs and features. I had spent half a day scouring every inch of a particular zone, puzzled that I couldn’t interact with anything. It turned out that a significant part of the level architecture had failed to load. It only took a downgrade of my GFX drivers to fix. In an alternative horror universe, this could have been an amusing way for the developers to pierce the fourth wall, engaging the player with a real-world puzzle; in mine, however, it was just a time-consuming, unnecessary hassle. Scorn is full of those.

I Have No Mouth, and I Must Scream 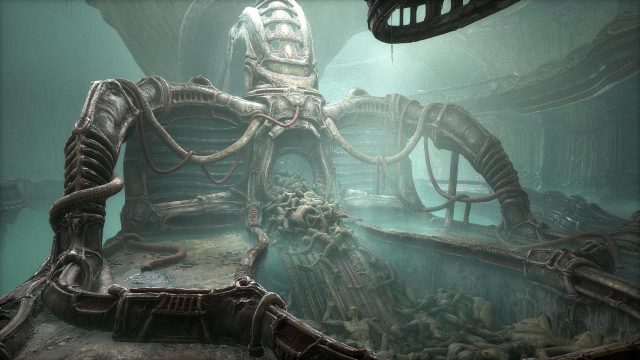 The Silent, presumably amnesiac protagonist awakens in a frightening, hostile environment, and only his wits can help him move forward and make sense of his predicament. It’s one of the oldest setups for action/adventure games designed around emerging story concepts. But don’t hold your breath here. Scorn doesn’t have a story in a classic sense, save for the bits and pieces you could divulge from the surroundings. The game lacks narration, dialogue, lost diaries, or verbal interaction with other sentients, but the signs open for interpretation are numerous. That, of course, It’s not bad by default. Dark Souls made a bank relying on environmental storytelling. However, theirs was always secondary to other narrative instruments totally absent from Scorn.

So, what can you deduce from the ruined bio-city, full of decrepit torture chambers, slithering walls made of meat, and bizarre contraptions? Some collapsed civilization obviously did some gruesome work here; You are one of the victims that escaped his fate, saved by the failing technology instead of his own devices. You will try to move forward, confused and suffering from something terrible growing inside your body. Navigating mazes made of flesh and metal, you will struggle to understand the internal logic of ancient devices barring your way. Lacking a clear objective, you will roam and interact with fleshy apparatuses, hoping for a result. Any result.

Would you Root for an Asshole? 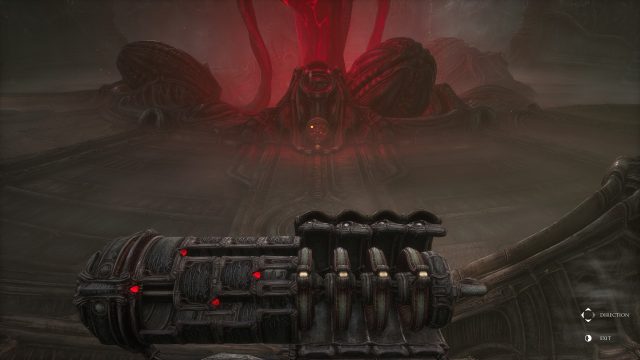 Scorn is not aimless, but it projects a vibe of nihilistic indifference for the coherent structure you might expect from the experience with similar games. It expects you to care about the protagonist without providing a single emphatic hook to him except for the obvious pain and suffering he’s experiencing. Would you root for him if he was an asshole? You might very well ask yourself that question. In the first chapter, he willfully sacrifices the poor, deranged man he’d rescued from the bio-pod just moments ago just because he needed his hand to activate the automatic door. The game doesn’t offer a choice in this matter; it just forces you to pull the lever and execute/dismember the hapless soul.

A similar nihilistic design philosophy is evident in puzzles, which feel more strange and arbitrary as you delve deeper into the belly of the proverbial beast. In ACT I, puzzles and tasks expected of you are relatively organic but later become weirder and harder to comprehend. I’m not talking about difficulty, which is, in places, substantial, but of sense of them being pulled from someone’s ass. Developers painstakingly sculpted a horrible but authentic world and filled it with random mechanisms designed to annoy. It’s hard to spot intelligent design in some places, especially during later, maze-like chapters. Expect lots of running around and a tiresome search for interactive spots.

Look at me, I’m gruesome! 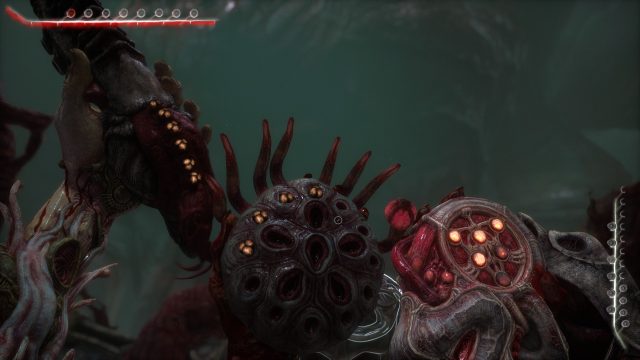 Scorn is not just a weak exploration/puzzle game; later, it introduces equally horrible shooting action. Ammo is severely limited, forcing you to conserve it like crazy or use an unwieldy pneumatic hammer that causes minimal damage. Your weapons are gruesome, too, representing biological equivalents to shotguns, pistols, etc. Luckily, enemy behavior can be easily exploited, forcing them to chase you around obstacles. Avoiding combat that way isn’t fun, but it’s practical.

I mentioned multiple times that Scorn is visually a pretty disturbing game. Exposing the player to gruesomeness can only work to a certain extent after it becomes pure background noise. There’s no beauty here that serves as the counter-point to sinewy, cancerous growth and cursed machinery. After a while, it all blurs and devolves into only a slightly repulsive sight. Most of the later levels are vast, maze-like multi-corridors of misery – a prolonged stay there won’t scare or even unsettle you after the initial “Ewww”. In short, Scorn becomes less and less atmospheric as you spend more time playing it. 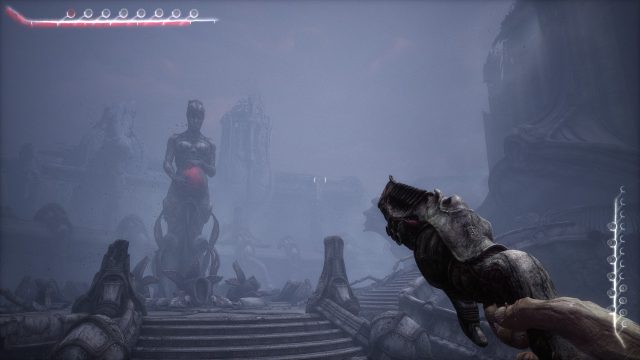 In 2017, PewDiePie theatrically screamed while playing a very early game build. That was, of course, a melodramatic overreaction, but it summarizes the intent behind the game. It was supposed to be terrifying and super-unsettling, which works for a chapter or two, but the raw horror slowly devolves into frustration. I’m sure the developers would like Scorn to be considered a next-gen Amnesia, but that comparison would be ridiculous. Scorn has a promising start, but its torch soon fizzles into mediocrity and downright lousiness.