I have always been fascinated by the ability of Japanese RPG developers to blend and hybridize tenets and motifs of the major world religions. Using those vivid mixtures as a backdrop for their games injects a unique flavor seldom found anywhere else. Especially in the West that seems dead-set on classic high fantasy. Shin Megami Tensei V, the latest game in the ancient Japanese franchise dating back to 1987, is the poster boy for that pseudo-ecumenical approach. This Nintendo Switch exclusive skims the outer layers of Christianity, Buddhism, tribal Animism, Shamanism, Shinto, and various folklore from far and wide. The result is a JRPG experience that also borrows certain gameplay aspects of Pokémon and early Disciples. Rich tapestry or a weird mess? The first one, for the most part. 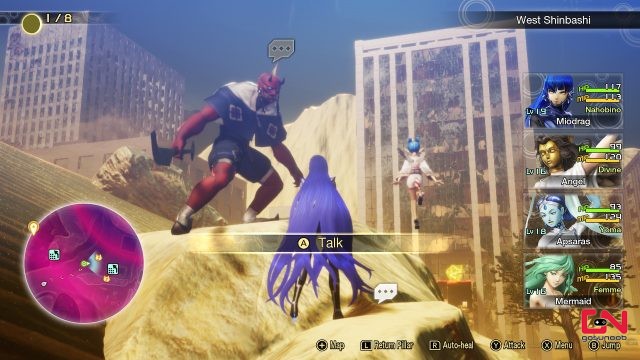 Tokyo, that New York of the East, always was a popular choice for every otherworldly force seeking the global downfall of humanity. Our unlikely hero is the quiet student that finds himself in the wrong place at the wrong time, being sucked twenty years into the post-apocalyptic future. He regains consciousness in the desolate ruins of Tokyo, obliterated in the final battle between God and Lucifer. The bad guys won but haven’t made much of their victory. Salvation cometh seconds before he would fall prey to the group of local demons. Nahobino, the ethereal entity that fought on the side of angels in the war, merges with him. They have a long road ahead if they hope to reverse the World’s fortunes. 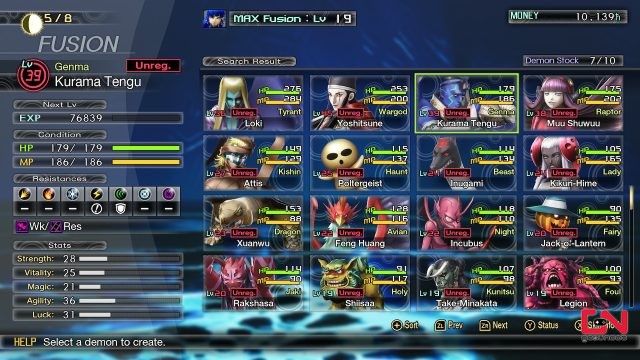 The bleak landscape offers an ever-increasing degree of freedom in tackling the primary challenges that move the story forward. You will navigate it on foot, picking the fights with demons to advance, grow and evolve your diabolic menagerie. Demons aren’t just an obstacle to overcome but a helpful tool that you’ll collect, nurture and strengthen during your adventure. In every encounter, before you resort to blows and spells, you have the opportunity to talk with a demon. If you provide it with desired stuff or pass their simple challenges, you could recruit it. They come in all shapes and sizes, wildly varying in power, types of attacks, elemental resistances, and affinities.

Demon theory-crafting is an essential element of the game. The depth of that system is staggering, offering the player options to craft and fine-tune their custom force, with a primary roster and plenty of reserves suited for specific challenges. The root of it is the demon fusion, the process of combining two different entities into something new and, hopefully, more powerful. There are myriad combinations. More potent mixes are limited by the level of your hero, so there is not a fast and cheap way to dominate. 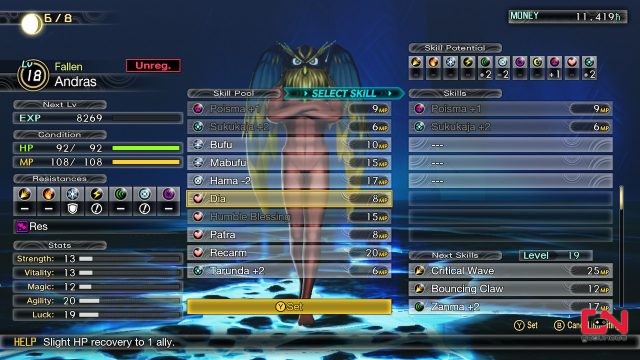 Each demon has a unique attack profile related to its elemental affinity and lore. Jack-o’-Lantern, for example, has fire-based attacks, while Mermaid has a mix of freezing and mind-affecting spells. If you fuse it with something else, you will have the opportunity to select which attacks will carry over to the new hybrid. There is limited space for those, which you can increase by spending one specific resource augmenting your main avatar.

Newly created entities can be further altered in two ways. The first, simpler one, is spending the rare augmentation artifacts that you’ll occasionally loot; the second option is the transfer of the entire attack profile of an entirely different demon, which you can perform if you manage to obtain its essence. Every entity’s chief defining spells, such as Angel’s AoE heal, cannot be transferred that way, probably to prevent creating overpowered hybrids. In any case, the degree of freedom offered here will satisfy the mix/maxer in everyone.

By default, Shin Megami Tensei V offers only English voiceover, but the Japanese equivalent is just a click away, provided as a free DLC in Nintendo eShop. There you will also find plenty of other DLCs, including some that enable lower difficulty tiers. Some people will need those, as the game is anything but easy on default, intermediate setting. 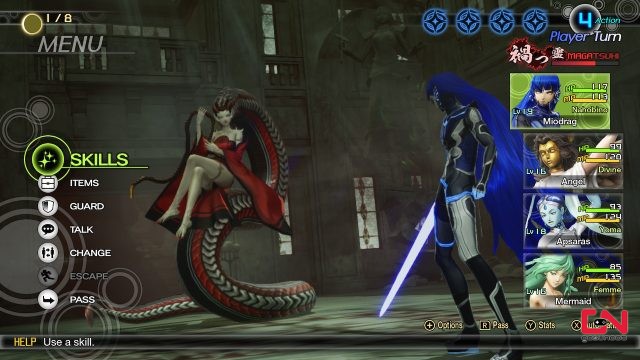 The difficulty lies in the unpredictability of most encounters. There is also the fact that you can save the game only on specific locations (Ley Line Founts). In the game world, enemies manifest themselves with the dominant demon, but the exact number and composition of the group are always unknown. In theory, you can escape from every battle, but it often fails, leaving you open to painful clobbering. Things get easier after a while when smoke bombs become more readily available. The difficulty curve flattens once you get one specific gadget that enables teleportation to the last Ley Line Fount.

Boss fights are something else. As a rule, they require specific group composition and usage of consumables. Elemental dampeners that block one school of magic for a single turn are most useful, as they can prevent devastating AoE attacks that can decimate your forces. You will need to arm yourself with patience to find the best approach for those fights.

You should play this one 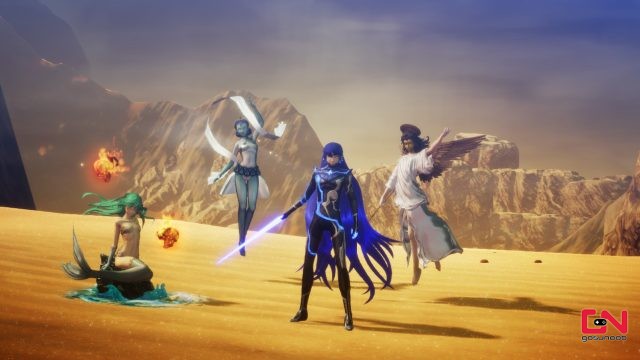 Shin Megami Tensei V is an excellent game that offers freedom of experimentation, a solid story with a foreboding atmosphere, and occasional humor. It will put your skills and patience to a severe test, but the dopamine rush after the ending credits will be worth it. Shame about the Nintendo Switch exclusivity, though, but I suspect it won’t last very long.

PREVIOUS POSTShinx Pokemon BDSP – How to Get Shinx

NEXT POSTHow to Get Surf Pokemon Brilliant Diamond and Shining Pearl