If you aren’t a cockroach, Mel Gibson, or a cat, your chances of living through the apocalypse and surviving in the follow-up dystopia are slim. Humans pride ourselves on resilience, but most of the essential survival skills slowly devolved since we stopped hunting and gathering. Just imagine existing without toilet paper? Or eating a raw beetroot? I simply can’t picture myself thriving under those circumstances. In the case of severe global turmoil, most of us wouldn’t turn into road warriors. Instead, we would simply roll over and die.

Stray is the story of a feline survivor in a world long devoid of humans. Our nameless cat lived happily in its small clowder, roaming and playing near massive industrial ruin, enjoying the great outdoors. One fateful day, the rusted pipe collapsed under its weight, and the cat fell down. There goes one of nine lives, eh? The cat managed to squeeze its way into a long sealed vault city made to endure the global apocalypse. The city is nowadays bereft of sentient biological life, but it is not empty. Or entirely lacking sentience.

The Cat, the Droid, and the Dystopian City 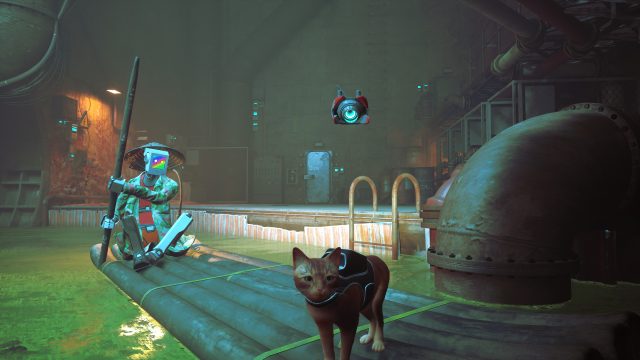 Touring the dusty, abandoned streets and narrowly escaping a swarm of hostile parasitic creatures, you experienced another brush with fate. Stumbling upon a tiny floating droid, B12, you got yourself a trusty companion on your journey to the outside. The droid is the central narrative driver in the game, and it also works as an item repository, remote hacking device, and communicator/translator.

It will mostly translate the synthetic voice of other sentient robots living in isolated communes in the city. Those former servants evolved sentience and continued living like their masters used to. Their civilization closely mimics the world before, suffering from the same problems. In contrast to mostly free-ish slums, upper parts of the walled city exist as a robotic police state. Any misbehaving denizen who steps out of line gets the format c: treatment. That fate is also reserved for anyone attempting to open the seals and leave the city. A group of enthusiastic robots with an open mind, The Outsiders, used to dream about reaching the outside world despite restrictive protocol. Lately, they had given up on that dream, but maybe one enthusiastic cat could put things in motion again? 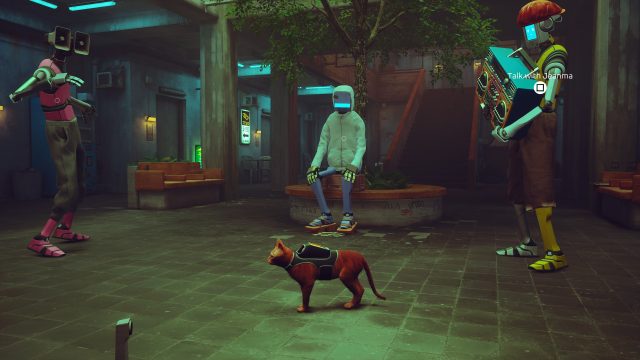 So, it’s a part of Logan’s Run movie and Druuna comic book, but without violence and sex. Stray is a mostly wholesome game suitable for everyone, including children who will be attracted to the cute heroic duo. It will last between five and six hours, depending on the player’s diligence in digging up optional secrets. Despite extra content and unlockable memories for B12, it has only one bittersweet ending. This isn’t a spoiler or a surprise, really. Subtle melancholy permeates everything from the beginning, and a poignant ending is visibly in the cards.

At its core, Stray is an action-adventure game with simple acrobatics, even simpler puzzles, and lots of charming, anthropomorphic robot NPCs. The game world is divided into several quest hubs, separated by linear sequences, usually related to running away from the Zurk parasite. Those organic pests, resembling Flood from the Halo series, evolved from the designer bacteria engineered to dissolve the garbage. It gradually developed a taste for meat and metal but is sensitive to UV light. You will exploit that vulnerability mid-game when you get your paws on a particular light gun. Yes, there are „shooting“ elements in this otherwise slow, peaceful game. Those sequences are short, contextual, and make perfect sense, despite the tonal difference from the rest of the content. 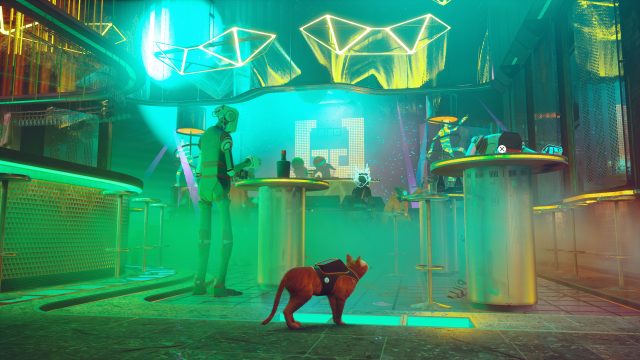 There’s a lot of verticality in Stray, especially in the hub sections. Navigation through a three-dimensional game world is based on a simple system of jumping prompts. Those signify the reachable spots, significantly streamlining the upward and downward movement. Climbing the roof of a building usually requires finding an initial leaping spot, and up goes the cat following the X! The environment is densely packed with interactive stuff and loads of secrets. Finding some hidden memories for B12 will take up most of the extra time in the game. All optional extras are dedicated to lore seekers and achievement hunters since none contribute or alter the conclusion. There are no hidden cutscenes or revelations, even if you manage to clear 100%.

In the late game, stealth takes a point from running away and „shooting. “ You will mostly avoid police seeker-droids, dashing madly to break line of sight if caught in the spotlight. The cat is nimble, fast, and can hide almost anywhere, so clumsiness is rarely fatal. If they get you, you’ll lose just a minute or two of progress since the last checkpoint (those are pretty generous). 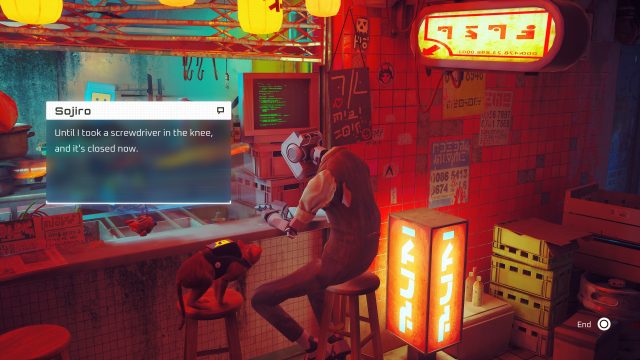 Stray is a good-looking game. The cat model and animation are perfect, the environment is rich in detail and substance, and the vistas are sometimes spectacular… The word “cyberpunk” is often used to describe the experience offered in Stray, but that’s mostly not true. Stray lacks the punk element, so “cybercute” should be a more precise descriptor. The cat is a silent protagonist, apart from a dedicated key for meowing that sometimes provides a navigational clue. An old saying states, “If cats could talk, they wouldn’t.”

From day one, Stray is free for PS Plus Extra or PS Plus Premium tier subscribers. Sony has a long way to go trying to outbox Microsoft in the value of the subscription plans, but this is a step in the right direction. Otherwise, expect to pay 25 USD/EUR for the experience, which is pretty reasonable for the amount of content the game provides.

PREVIOUS POSTDiablo 4 Beta Date, Time, and How to Sign Up