Renaissance of a beloved classic concept or remaster of a tired, old trope? Everyone’s opinion of a modern remake of the game with decades-old roots will fall in one of those two categories, depending on if there is nostalgia involved or not. Fans of the classic RTS games such as Age of Empires and Stronghold will surely pick the first option when describing Stronghold: Warlords, the latest in the very long-running series of defense-oriented, castle building real-time strategies. 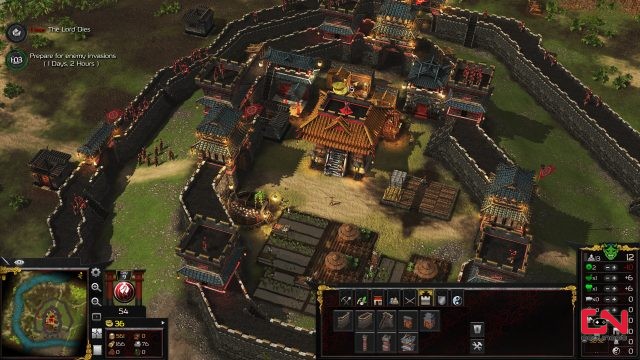 Stronghold: Warlords is the ninth Stronghold game, and compared to the last few titles in the franchise, it offers several meaningful improvements of the concept set in stone in 2001. The main difference between Stronghold games and other historical RTS was the strong emphasis on defensive fortifications – most other games favored pure aggression, but the original stronghold was built with the “turtling” player in mind. Another significant peculiarity was a rather complex economy you needed to develop behind those strong walls of stone. All of that, and more, is preserved in Stronghold: Warlords.

The first new thing here is the focus on east Asia. Instead of a medieval European setting, the game covers several major empires from the far east, offering five single-player campaigns. From the proto-Vietnamese civilization of u Lạc and the early Qin empire, you will transition to Gengis Khan’s Mongols, ending up in Sengoku era Japan for the grand finale. The fifth campaign is purely economic, devoid of combat and conquest, and fully oriented to economic matters, supply chains, and tight schedules. Apart from those campaigns that span 1500 years of history, there is also multiplayer, skirmish, and a free building mode for the zen-minded castle builders. 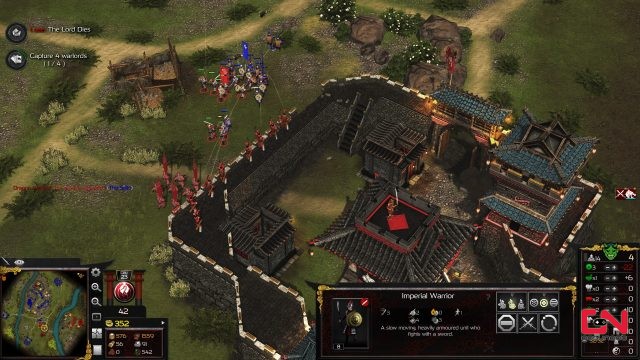 A second significant new thing for the franchise is the concept of warlords. On most campaign maps, there are several mini AI strongholds that are initially neutral; once you or your opponent plow thru their (meager) defenses and subjugate their warlord that chills on top of the keep, their allegiance will be secured, which translates into an occasional influx of building resources, combat reinforcements, diplomatic boost or something else that can be used. Their vassalage can also be obtained by peaceful means, investing diplomatic points in a bidding war with your primary opponent, but those points are usually needed for „buying“ the resources and reinforcements from other warlords you already own. There are several types of warlords, each providing different resources or services as a tithe – „Mouse“ warlord, for example, can supply rice and other foodstuffs. Engaging with warlords is rarely optional – they often provide the materials you lack (stone, iron…) or much-needed reinforcements that you’ll desperately need to overcome the main challenge in each mission. 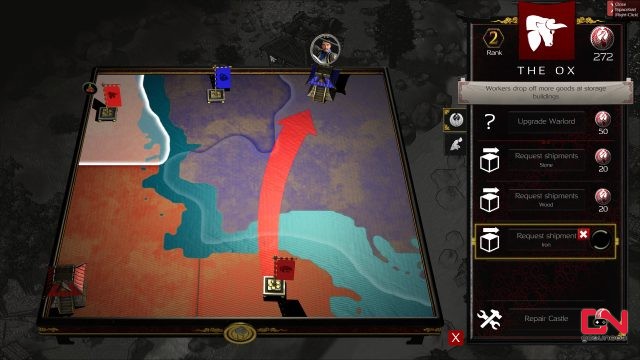 Stronghold: Warlords is pretty hard. Campaign missions almost always follow the script of goals and engagements, offering very little free-form gameplay and freedom of choice. You will rarely have the opportunity to do things your way, either because the mission objectives lead you on the predetermined path or because the arsenal of units and buildings is strictly limited. This “scripted strictness” is the major flaw and those rigid campaigns often feel like extended tutorials that prepare the player for skirmish and multiplayer, modes in which you or the multiplayer host sets up the limiting factors. 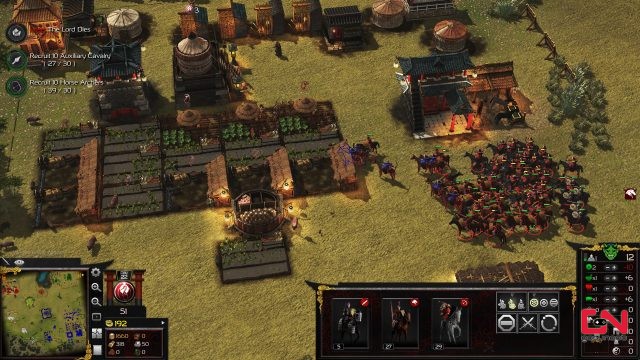 The economic part feels like a game of its own. Food is needed to boost your workforce’s morale, and each additional variety besides rice (meat, vegetables, tea…) pumps the happiness up. Happy peasants can be taxed more heavily – gold is necessary for the most potent military units and several important buildings, so setting up the “chain of happiness” that enables influx of cash is the priority. Apart from food, you will need wood and stone for building the pieces of that noble chain, and later, iron for the units more complex than basic spearman and blowpipe skirmisher. Some resources, like wood and iron, need to be further refined for combat use. For example, if you plan to upgrade your ranged force to include archers, you will need a fletcher workshop. More advanced units have more requirements, like lances, armor, and horses for the strongest cavalry type. On top of everything, you need to make sure that there is enough housing for all those peasants you need for an efficient economy. On some maps, building space is pretty scarce, so that’s one more obstacle to consider. 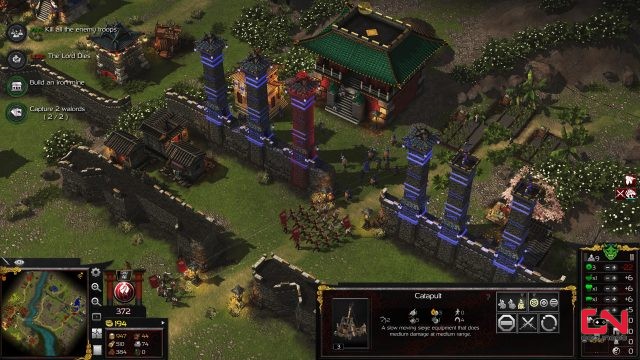 Visually, Stronghold: Warlords is not a very impressive game – it surely tops the Stronghold Crusader II from 2014, but that’s like saying that cobblestone beats mud as road-building material. It’s rich in detail, but it looks dated at the same time, if you know what I mean. On the positive side, its hardware requirements are pretty low – if you played last year’s Age of Empires III: Definitive Edition, you will have a pretty similar experience here while playing on the same hardware.

Playing Stronghold: Warlords feels like going for a jog wearing well-worn running shoes that you found in your parents’ basement, thought lost since high school. There is nothing that will blow your mind here, but the nostalgic value alone can be enough for some players. Long term success of the game depends on whether multiplayer find the audience and take off.