You probably heard about recent developments in the field of AI-assisted image generation and processing. User inputs textual description, Skynet churns out incredible images, and everyone goes OMG. The core tech behind those AI is machine learning; it may look like magic, but an integral part of it is just consistent sifting through an incredible amount of raw data. AI can also assist in producing music and written material. Someday, it will be capable of conjuring semi-believable pseudo-literature out of thin air.

What about video games? I know for a fact that The Callisto Protocol is made by real people, but the game looks like the work of an AI. And not in a good way. This sci-fi survival horror is so generic and imitative that feels like it’s made by a robot specifically programmed to steer clear of any original concepts. Its instructions were simple – take the basic ideas from Dead Space and mix them with a processed goo compiled from the internet; consider only the references, tropes, or motifs that had been already used at least 1000 times before; for combat, extrapolate the worst mechanics of Resident Evil 5 and put it through frustration.API. 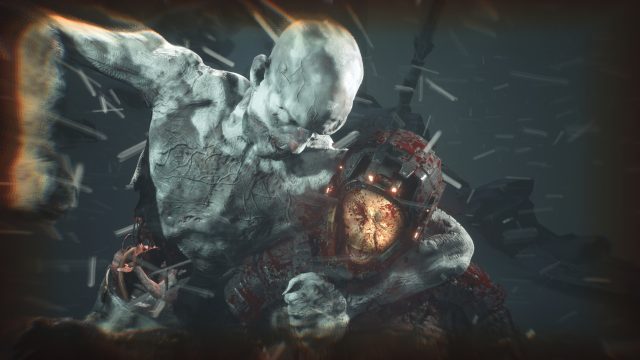 The game deals with the deadly infestation in Black Iron Prison, maximum security correctional facility built on Jupiter’s moon Callisto. Early in the XXIV century, humanity spread all over the solar system, with corporations leading the way. The vast Expanse (pun intended) made oversight impossible, so the marriages from hell, such as the union of private prisons and earth-borne transhumanism cults, became possible.

Jacob Lee, our unlikely hero, is a cargo pilot who found himself in the wrong place at the wrong time. Much like Isac Clarke from Dead Space or hacker from System Shock games, he will face incredible odds, listen to plenty of audio logs, and augment his weapons with mods. He will fight mutants, struggle with limited resources and learn to expect a jump scare at every corner. Those are hyper-abundant, by the way. Seems like developers deliberately shunned all other tension-building methods. Mere halfway thru the game, reliance on it reaches the point of absurdity. YES, WE GET IT, mutant emerging from the ventilation shaft is scary, but for the love of God, use something else from time to time.

If you aren’t a total newcomer in this gaming business, Jacob’s journey will be even more predictable than jump scares. Various escape attempts will always end in temporary setbacks – at least three of those will have him fall through collapsing structures/stairs/walls. He will fight a grand total of two bosses, but he’ll fight each one three times. If you don’t die often, you can expect twelve to thirteen hours of total runtime. 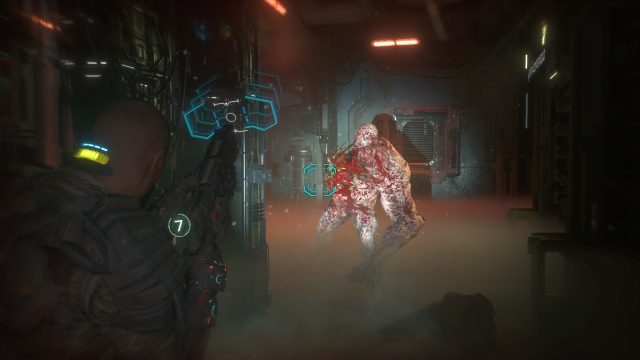 Jacob moves around with the dexterity of a freight train, which complicates combat. You have several different firearms in this game, but the trusty shock stick will be the staple of self-defense for a long time. The problem with melee combat is at least two-fold. First, the lack of peripheral vision and the clumsy camera will always obstruct your field of view. If you fight more than one opponent, as you would be often doing, you’ll simply have to rely on instinct instead of vision. Mutants are relentless and can take major punishment, and until you purchase damage upgrades for your baton, you’ll struggle with more than one foe.

The second major problem with melee is the clumsy forward momentum that always brings you closer to danger. You can dodge and block, but since the camera is not on your side, dodging can lead you to the loving arms of another mutant. And, of course, there are plenty of environmental hazards, especially later on. A single contact with rotating blades/gears means death, for both you and the mutants. You can exploit that by using G.R.P. (Gravity Restraint Projector), which represents the evolution of the Kinesis Module of Dead Space games. Here, you can pick up mobs and throw them into hazards or each other. This cool concept is hampered by the small battery capacity and long recharge time.

Firearms are more fun, especially when upgraded. You get two kinds of pistols, two shotguns, and one assault rifle. Ammo and credits needed for upgrades are scarce, but the shortage is no stricter than in any typical Resident Evil game. In key moments such as boss fights, you’ll always have some ammo lying around, so you won’t hit the brick wall (except maybe for that one boss who requires perfect dodging). 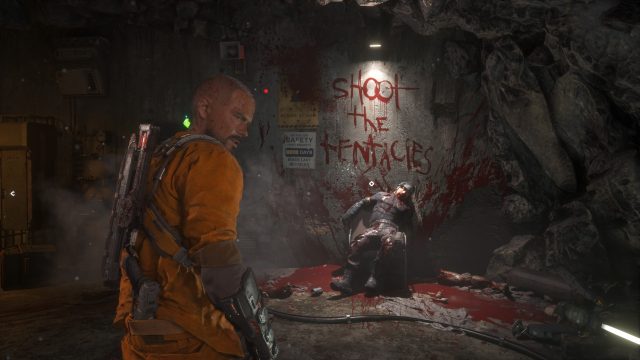 The main marketing point of The Callisto Protocol is the collection of gruesome death animations. You are forced to watch those every time you die, and the variety is not that spectacular. On the menu are various forms of partial or complete decapitation; mutants will also rip your arms, squeeze your eyeballs, bludgeon your skull, etc. The shock value of those vignettes soon devolves into a source of significant frustration, especially if you are forced to watch them ten times in a row. The developer promised more variety in the upcoming paid DLC though and got well-deserved internet flak for it.

Low variety is also present in the audio logs you’ll constantly find lying around. Those are also super-generic, mostly containing panicked last words of some hapless soul caught in the violent outbreak. I still remember how masterfully System Shock 2 handled this concept. The love story of Tommy Suarez and Rebecca Siddons, their escalating struggle to find each other among the chaos on Von Braun and Rickenbacker, and the chilling conclusion were presented exclusively through audio logs. That kind of quality drama feels like a Dostoyevsky novel compared to the pulp banality of Callisto logs.

So, The Callisto Protocol is not stellar, to say the least. I suppose it looks awesome, and the production values are superb. It presents a pretty face to the world, which tries, unsuccessfully, to hide its generic emptiness. If you plan to get the game, I suggest you skip the PC version, at least until they remove Denuvo DRM. It’s implemented in the same clumsy way as in Resident Evil Village, causing stuttering and poor performance in general.

NEXT POSTMinecraft You Need to Authenticate Microsoft Services Fix