Colonel Miles Quaritch from James Cameron’s Avatar had this to say to every new batch of base security personnel: „You’re not in Kansas anymore. You’re on Pandora, ladies, and gentlemen. Respect that fact, people. Every second of every day. If there is a hell, you might want to go there for some R&R after a tour on Pandora. Out there beyond that fence, every living thing that crawls, flies, or squats in the mud wants to kill you and eat your eyes out for jujubes“. Neat. The Riftbreaker finds that amusing.

It’s pretty much the same horror on Galatea 37, a planet on the other side of the Milky Way galaxy, the wild, untamed place that has been found somewhat compatible with human life. Except for the fact that you are alone and there is no fence unless you make it yourself. You are captain Ashley S. Nowak, a scientist/commando hybrid sent through a one-way rift portal to construct the bigger, two-way installation that would enable colonization of the said planet. Equipped only with a sentient mech suit dubbed „Mr. Riggs, “you will need to explore, scrounge up resources, construct and fight like hell. There is no backup nor plan B, just you and your wits in one of the most dangerous environments known to man. Or a woman, as Cpt. Ashley is one. 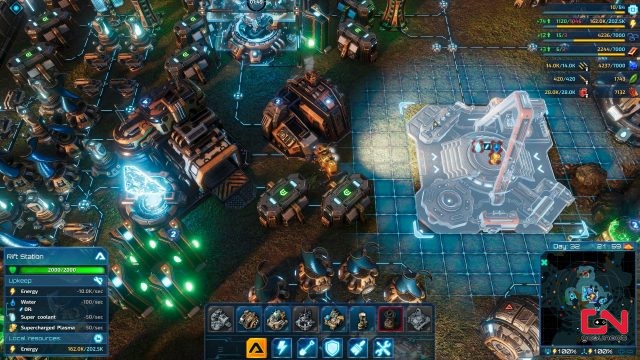 The Riftbreaker is a clever and challenging hybrid of a survival base-building strategy and action RPG that sometimes feels like a tower defense game crossed with open-world exploration adventure. Yeah, it’s fantastic. Or it would be fantastic if there wasn’t for a few annoying bugs and inconsistencies I will address a bit later. The game offers a continuous, non-linear experience from start to finish, without chapters and individual levels. That means that stupid mistakes you will inevitably make will stay with you until the end or until you decide to invest time and resources in fixing them. It’s the ultimate game of effort and consequence, and that is its biggest attraction, at least to me.

So, breaking the rifts… You materialize on the open field, fresh from the intergalactic jump, near the node of basic metal needed for the foundation of your first base. Before you set up automated extractors and provide electricity for their operation, you will need to mine manually. And until you place a fence and few basic turrets, you also must cater for the defense yourself. Using a melee cutter and basic machine-gun that comes with the mech suit, you will mow the weak wave of starting mobs. You can do this easily! Well, I suggest that you save that enthusiasm for later, as you’ll need several silo-loads of it. 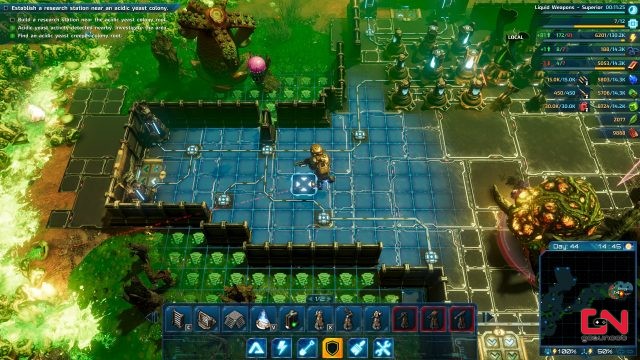 The core of The Rifbreaker is the escalation of resource operations. Stuff more complex than primary buildings and equipment require advanced materials, and those can be found in more hostile environments; to survive in those environments, you’ll need superior weapons and equipment. You see where this is going. In parallel with the evolution of your main base, outposts, and tools, the threat from alien fauna will escalate to match it. Pretty soon, you’ll need to turn that fence into a solid wall and augment basic ballistic turrets with close-range flamers, plasma, and laser counterparts.

Resources aren’t infinite in The Riftbreaker, and that’s a significant point of later game friction. Some installations, such as ammo foundry for your artillery turrets, need a constant supply of iron, mined from the limited nodes scattered around the landscape. So you’ll need to permanently worry about setting up temporary extraction bases, fence them up, and stuff enough turrets to last until you teleport there to assist in destroying the wave after wave of hostile beasts. You’ll lose the game only if mobs manage to obliterate your main HQ or kill you in a different biome that you are exploring with no outpost.

Speaking of dying… In normal circumstances, if slain, you will be teleported to the nearest HQ, sans a random weapon that you were carrying. If you prefer a real challenge, though, you can play this game in one life, ultimate roguelike mode. The mode in which first death means The End.

Not for the faint of heart 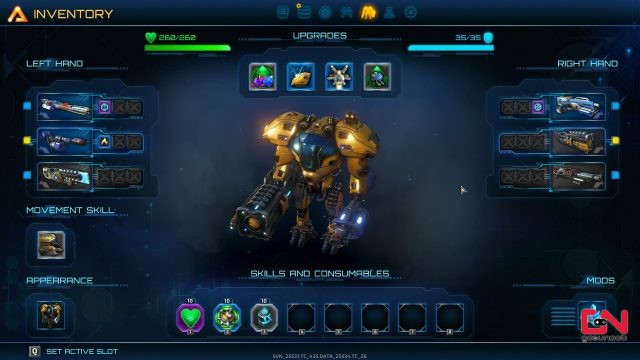 Imagine that, after 15 hours of painstakingly building your automated techno-colonial empire, you slip up, get eaten, and booted to the main menu. I would recommend that mode to hard-core players looking for a considerable challenge. But the prerequisite would be that the game was more polished, balanced, and bug-free. I had played the game on PC and encountered numerous technical flaws that can quickly get you killed. First of all is the general slowdown in the mid and late part of the game, when your main base expands to the size of several football fields. Random enemy assaults can and will slow your framerate to a crawl, disrupting your rhythm. Every time the game autosaves, the action completely freezes for a couple of seconds, then restarts as if fired from a slingshot. 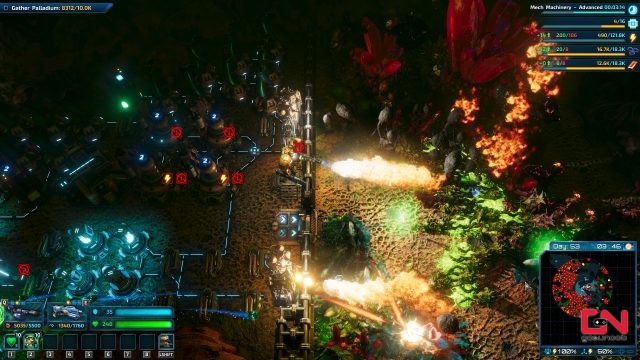 The less dangerous but still annoying bug is painfully slow loading. When you set up extraction bases in several different biomes in the later game, rift-jumping between them will become a real chore. I have a reasonably fast PC equipped with M2 SSD and RTX 3080, and it had never sweated so much as when it was running The Riftbreaker. Part of the problem, most likely, lies in the custom game engine. Instead of usual suspects like Unreal or Unity, The Riftbreaers’s devs hipsterly decided to use their engine, Schmetterling 2.0. I’ve heard that the game performs well on consoles, but I haven’t tested that myself.

If you can look past these technical shortcomings (and, perhaps, wait for the patch or three), The Riftbreaker can be enormous fun. It’s challenging, visually attractive, and witty, but very demanding in its advanced phase. The game reminded me of Subterrain, a fantastic sleeper hit from 2016. that went completely under the radar, even for the hard-core audience. Please play both of them and broaden your gaming horizons. You can thank me later.

PREVIOUS POSTWeapon Skins Back 4 Blood – How to Get Skins

NEXT POSTTransfer Server New World – How to Transfer Character