The best way to describe Tunic would be a cute mixture of The Legend of Zelda: Link’s Awakening and bits and pieces borrowed from the Dark Souls series. You play as an anthropomorphic fox that awakens on the deserted beach, with a sole path leading inland. Pretty soon, you’ll stumble upon a wieldable tree branch and promptly get to use it on some hostile globules. Then the trail will split, and you’ll begin to explore a vast, mysterious landscape brimming with magical secrets. I had always loved the gameworlds that open like a flower when touched. At least at the start, Tunic offers precisely that kind of experience. Some appearances, however, are destined to be deceiving. 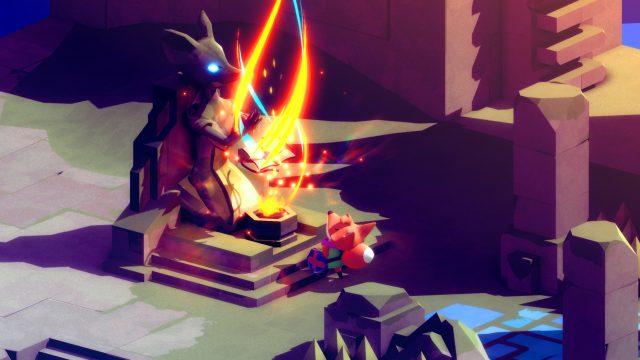 Presumably taking a cue from the Dark Souls universe, Tunic offers a cryptic, fragmented story mostly experienced by silent storytelling. Very few things are concise and presented straightforwardly, so a significant part of the fun for the player will be piecing together all the bits into one coherent narrative. Lore is not very complex, but a few things will remain open to interpretation until the end.

The crux of the matter is an underlying mystery of the Fox goddess trapped in otherworldly prison. The landscape is dotted with shrines dedicated to her. Like bonfires in Lordran, those shrines will rejuvenate you, replenish your health items and serve as a resurrection point when you inevitably die. You will also level up with their assistance, offering specific items and paying the price in shards dropped from dispatched mobs. 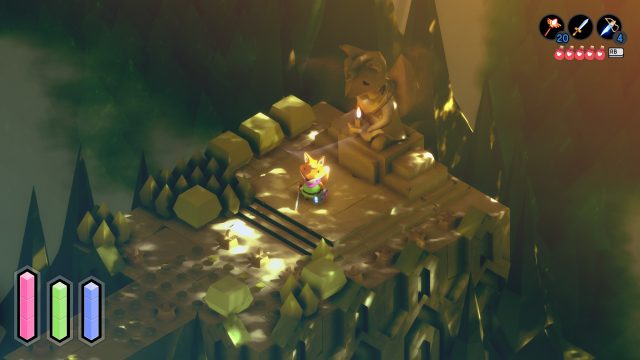 The land is full of dungeons, secret passages, and mysterious devices which function you’ll gradually reveal. It also crawls with creatures big and small, with an occasional boss that you’ll need to fight in pivotal junctures. It’s also structured like isometric Metroidvania, with venues open up when you meet specific criteria. This part of the game I had found to be the most problematic.

The joy of exploration and discovering new stuff is spoiled by the somewhat complicated layout of the world map. Simply put, they designed Tunic with obfuscation in mind. Due to the fixed camera angle, many critical paths are hidden behind walls, plants, and other terrain features. I’m not talking about clever concealment in the vein of Dark Souls, but vulgar obscurement that utilizes the limitations of the graphic engine regarding visible angles. Many hidden paths are crucial to advancement as the progress is surprisingly linear so that you can expect lots of stuck time. It took me around thirteen hours to finish the game, and I guess that at least a quarter I spent wandering around and backtracking in blind frustration. This thing is in sharp contrast with the sunny, laid-back atmosphere the game has in spades. 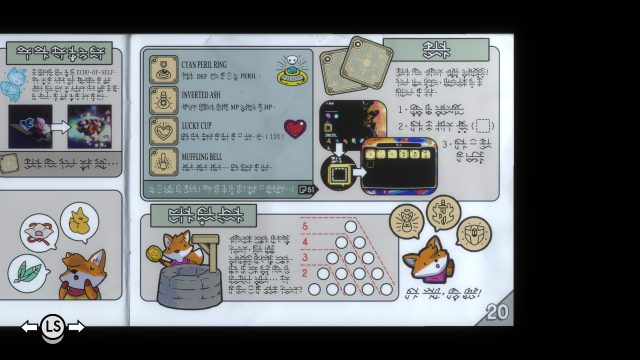 Targeted concealment of critical systems doesn’t stop with navigation. During the game, you’ll collect pages of the instruction manual, presented as a cute retro gaming booklet like they used to make in the last century. Its pages offer gameplay advice or explain the essential systems but do so in an especially grating way that combines unintelligible hieroglyphs with “randomly translated” snippets of information. You can easily dismiss the whole thing as an achievement-style gimmick, only to hit the wall because you failed to spot important bits that lack inherent logic. For example, leveling-up is performed at the checkpoint shrines, but not during the rest phase; instead, you must stand before it and press the left bumper on the gamepad. Information about this essential feature is buried on the page full of cryptic gibberish you can easily overlook. Mind-bogglingly stupid design decision. 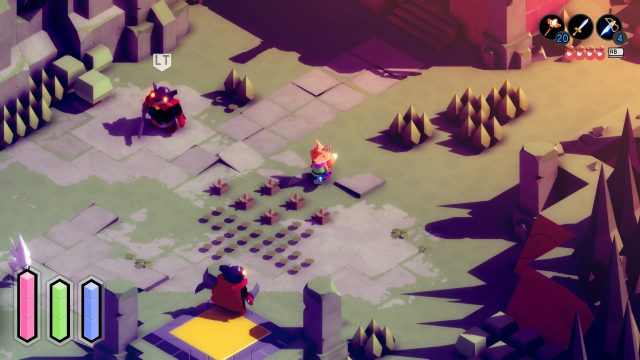 The combat system is relatively simple, gradually expanding from single button mashing to blocking, using consumables and magic attacks. There is a little room for finesse – the most important thing is the timing of attacks, blocks, and dodge rolls. Character progression is linear, meaning that you simply cannot out-level most challenges. Those challenges are all but insurmountable, though. Most of the time, you’ll plow through everything with ease. You can even opt to stop receiving damage altogether.

Tunic is an accessible game with invulnerability options integrated into the main many. With one click, you can make your fox immune to all attacks. There’s even an option that eliminates stamina drain in combat, so you can swing and block to your heart’s content. 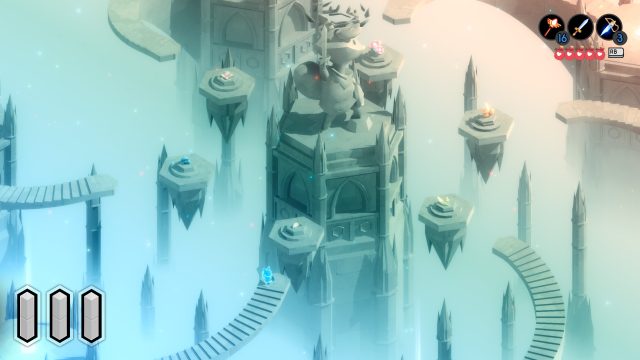 It’s easy to dismiss most criticisms due to disarming cuteness that radiates from every pixel. Tunic is a sweet-looking game with a distinct retro visual style that draws inspiration from The Legend of Zelda: Link’s Awakening. Should you play it, though? It depends on your patience and tolerance of pixel hunting needed for progression. Suppose you plan to solve it without consulting the guides or other people. In that case, I can guarantee you a solid dose of frustration.

But maybe you thrive on it? Perhaps you had spent a dozen hours hitting Elden Ring’s walls, fishing for hidden passages? If that’s the case, you’ll enjoy wearing this particular Tunic. Embrace the mystery with both arms!