Two Point Campus is a goofy management sim made by a British studio that gave us Two Point Hospital. Calling it “sim” might be overstretching it because the systems it simulates are banalized grotesquely and hilariously. Much like its predecessor, it tries to use satire and humor to paint a picture of a complex business entity from an administrator’s standpoint. This time, it’s a university, or rather, a series of universities with various backgrounds and curriculums. From the cuisine-oriented uni in a fictional Italian environment to a Hogwarts-like academy of magical arts, you will be dealing with similar challenges. You’ll care about money, a single resource that everything revolves on, more than anything else.

Money Makes the Curriculum go Around 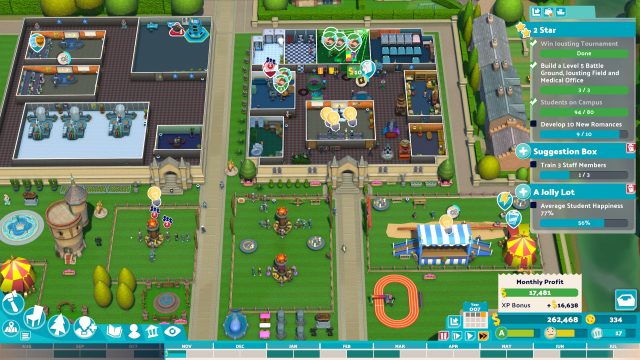 Unintended satire or not, cash flow is the alpha and omega of everything related to education in Two Point Campus. Your monthly earnings depend on the number of enrolled students, their average grades, and other attributes. Building the university facilities and recruiting staff is, understandably, a budget question. But the students’ grades and happiness are also directly dependent on money allocated to the objects surrounding them. University spirit, politics, academic trends, or even talent headhunting don’t exist here. To develop an expert in any given field, all you need to do is put the professor in the brain-machine, select the appropriate training, and wait. If you have the money to pay for the training room, brain-machine, professor recruiting fee and salary, you can churn as many academic giants as you want. The same goes for assistants and janitors. Other systems follow the similarly simple/banal principle.

Two Point Campus consists of several different universities, with a linear campaign (of sorts) that, in part, serves as an extended tutorial. Each new university unlocks after achieving a one-star rating in the previous one, which is not particularly difficult. At some point, you’ll open up the sandbox mode, where you can customize challenges and adjust the difficulty in various ways. During the campaign, you’ll unlock myriad items that enable deep customization of your dream academy. Unlocking costs Kudosh points, awarded for completing specific tasks and internal achievements. Placing unlocked stuff in the field, you guessed it, costs money and nothing else.

Item Spam for the Win 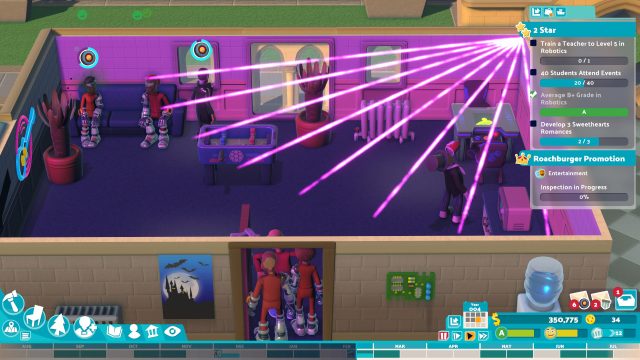 In order to have a functional university, you must try to satisfy basic requirements regarding classes, accommodation, and extracurricular activities. You’ll build lecture halls, labs, libraries, and other facilities, such as a jousting field at the knight university. Students also need dormitories, toilets, shower rooms, and places to unwind and relax. All buildable facilities and the general environment are customizable with optional and unlockable stuff. Extra reading tables in the library enable more students to use it simultaneously, for example. Other items, such as potted plants and posters, increase the environmental value of their surroundings. You can spam-deploy most items without diminishing returns as long as you can afford it and have space. You don’t need to worry about aesthetics. Creating a congested, unlivable monstrosity and benefiting from overlapping item auras is a viable strategy.

So, money enables comfort and happiness, which result in good grades, translating into increased monthly earnings. You can escalate that earnings loop as long as you have space to build facilities. Every campaign mission has a twist or two, but none of those can lead to failure. For example, on one map, you’ll suffer periodic intrusions from the rival school, but one or two janitors trained in security will take care of that. It’s very, very difficult to fail in this game. 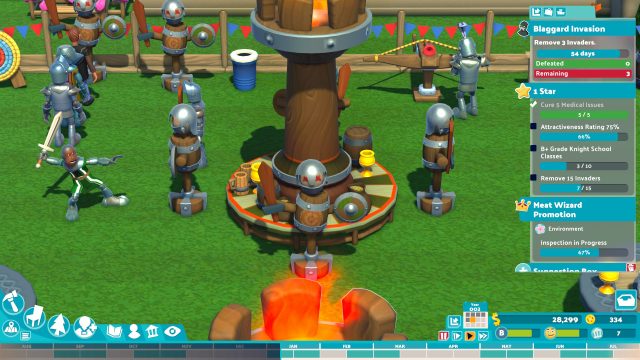 The goofiness of Two Point Campus is simple and lighthearted, lacking the sinister undertones present in, say, Tropico. Their radio hosts mostly blab superficial stuff related to campus life. At best, you can expect some meek satire about student loans and related debt prospects; at worst, jokes about purple chicken and unattended sandwiches. Inconsequential white noise, not a lot else, I’m afraid. Developers had a great opportunity to mockingly touch safe spaces and university woke trends in general, but they ultimately steered away from any potential controversy.

In many ways, Two Point Campus reminded me of Idle games, popular on iOS and Android these days. Using a basic common sense or blind instinct, you can pile up stuff, and the result will come by itself, requiring minimal corrections and subsequent input. Some people will appreciate a simplistic approach devoid of prospects of actual failure, but players looking for a challenge will be disappointed. Others will argue that the real value lies in unlocking a zillion customization items and joyfully building your dream campus. They, too, have a valid point.