Of course, you know by now about Vampire Survivors. Everyone does, and they are pretty vocal about it. Even if you ignored relentless Twitch streaming spam, someone on your Steam friends list probably pulled your sleeve to nudge you into checking it out. During the year-long early access, Vampire Survivors sold millions upon millions of copies, becoming the viral indie sensation of 2022. It was simple, super-addictive, priced less than the smallest latte, and had word of mouth on its side. How could it not succeed?

Vampire Survivors is a guilty pleasure, but not in the sense of dealing with anything controversial or NSFW. The “controversy” lies in the perceived banality of the experience, at least in the eye of the beholder. My wife, no stranger to gaming, couldn’t see the appeal of, quote, a mind-numbing mix of walking and auto-attacking. “This isn’t a game; this is the digital equivalent of popping a really long sheet of bubble wrap,” was the judgment she rendered. I guess that’s true. But a great philosopher once said that no time you enjoy wasting is wasted time.

Bullet-Hell with a Conceptual Twist 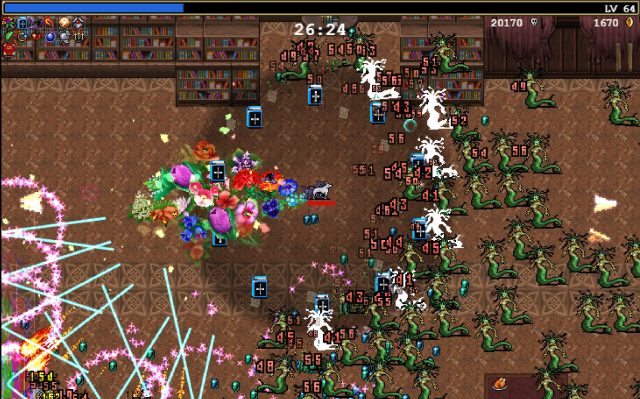 Vampire Survivors is a survival rogue-lite that works as an inverse bullet-hell game. Inverse? There are lots of bullets, blades, and spells flying everywhere, but inversion lies in the fact that you are the one causing the mayhem. The foes relentlessly attack you from all sides in progressively stronger waves, but your ever-increasing arsenal mows them down automatically. The whole point of the game is a DPS race with the clock. You need to increase firepower by efficiently obliterating hordes and collecting XP crystals. They overwhelm you if you lag behind the waves or choose unwisely while leveling up.

Most of the game levels have a half-hour limit. You’ll need to survive for thirty minutes, collect as much gold as possible and invest in permanent upgrades that make subsequent runs easier. Meta-progression doesn’t end with the augmenting of the stats. Unlocking different characters with specific starting weapons and gameplay modifiers is a lengthy and fun process. There are dozens of individuals whose unlocking requirements vary between super easy and weird/grindy. Vampire Survivors also has secret characters. Unlocking some of those requires data mining, so gaming wiki sites will be beneficial in this endeavor. 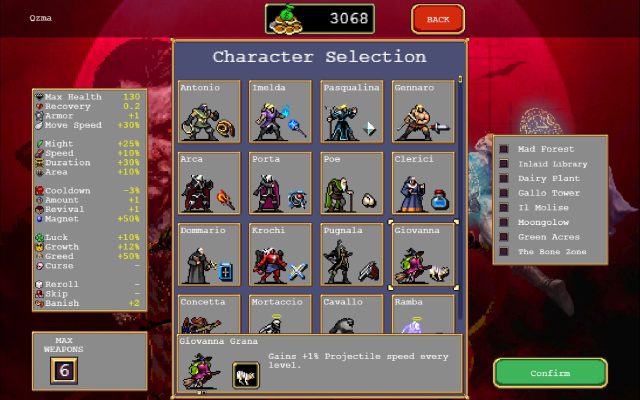 The core of the Vampire Survivors’ experience lies in that “bubble wrap bursting feel” remark I mentioned earlier. Each enemy death provides satisfying “pop” that massages some primordial part of your brain. While pleasing a hunter in you, the game also entertains the gatherer, as collecting the crystals and increasing in power feels equally gratifying. The progressively rising danger keeps you on your toes, preventing the disconnect between the brain and the experience.

All this sounds like the game requires no strategy or skill, which is not true. Picking the right upgrades and leveling up optimally are the cornerstones of survival. Your character can carry only six weapons and an equal amount of buffs or gadgets, so the proper choices are premium. For example, picking projectile weapons/spells and a buff that increases the number of shots in each salvo is a basic, solid combo. It certainly makes more sense than wildly mixing stuff that produces no synergy.

Combining specific weapons and buffs enables evolving of said weapons, vastly increasing their power and utility. My favorite mix is Garlic, circular damaging AoE field, and Pumarolla, passive HP regen buff. If you pick up both, you will eventually get the opportunity to evolve Garlic into Soul Eater, an AoE weapon that both damages foes and heals you. But besides plan, you also need a bit of luck, as the weapon choices during level-up are random. 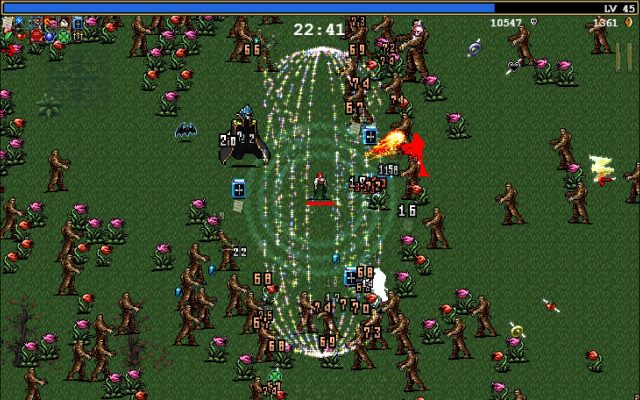 Vampire Survivors doesn’t have any story besides a few trolling sentences on its itch.io website. “The year 2021, Rural Italy, there lived an evil person named Bisconte Draculó, whose many evil magics created a bad world filled with famine and suffering. It’s now up to the members of the Belpaese family to end his reign of terror and return good food to the table”. Fortunately, the game doesn’t need any narrative more complex than that, as it would needlessly muddy the waters of simplicity. The game has over a hundred unlockables of all types, some of which are well-hidden and/or obscure. You won’t be able to quickly drop it once it captures your attention. I have spent twenty-four hours with it, and I’m still having fun.

Vampire Survivors reminded me of the ancient Onion clip about the fictional game that only lets you shoot people in the face. While not as simple as that work of brutal satire, the game is a pony of a few simple tricks that work very well. How is it possible that an auto-attacking survival game with basic avoidance could be this addictive? I don’t know or care, and I bet the developer (a single guy, I’m told) is equally surprised. I’m here for the pops and endorphins, and I’m getting those by the boatloads.