Almost exclusively, Warhammer 40K games are about indulging the Space Marine power fantasy, slicing and boltering the xenos, mutants, and heretics by the bushel. Playing as the Emperor’s finest is fun, but the fundamental building block in the armed bulwark of the Imperium is actually a lowly Guardsman. Untold billions of conscripted men and women of the Imperial Guard offer little in the way of epic glamor from which legends are made, though. So, how do you make their stories worth telling?

Pull the Shtrafbat maneuver, of course. This epic TV drama painted the grim picture of the Soviet penal battalion during WWII. Mistrusted and abused by regular Red Army cadre, those press-ganged ex-cons had the poorest equipment but fought the toughest battles. They were considered expendable and were treated like shit, even after pulling off battlefield miracles. Adapting that concept to the grim darkness of the forever war of the 41st Millenium is a novel way to spice up the interactive fiction that grew stale over the years. Darktide is basically a Shtrafbat game set in the Warhammer 40K universe. Sounds intriguing, to be sure. 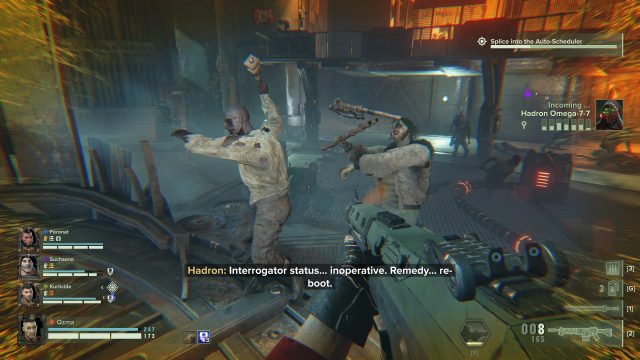 Warhammer 40K: Darktide is a co-op horde shooter in the same vein as Left4Dead. It has been made by the clever guys from Fatshark, who perfected the concept through two Vermintide games. Those were predominantly melee affairs, but Darktide ups the ante with lasguns, bolters, flamers, psyker powers, and many other ranged options. Darktide also has the expanded meta-progression, although that aspect is clearly not yet finished.

The game revolves around expendable convicts, spared from execution due to the acute need for combat troops. The Imperial hive city of Tertium is under siege by the Chaos god Nurgle. Disposable four-man teams, sent into semi-suicidal missions, are essential in stemming the tide. After the excellent character creation process which enables you to define backstory as well as a haircut, you’ll complete a short tutorial and off you go! As in Vermintides, there’s no campaign in a classic sense, but a series of stand-alone missions. The most sensible way to play is to pick the desired difficulty level and take the random mission matchmaking, as the queues are much shorter that way. Between missions, you can stroll around the command center, where you can access vendors and mission selector. Although other players roam the halls, it’s not a true socialization space.

Much More than Vermintide with Guns 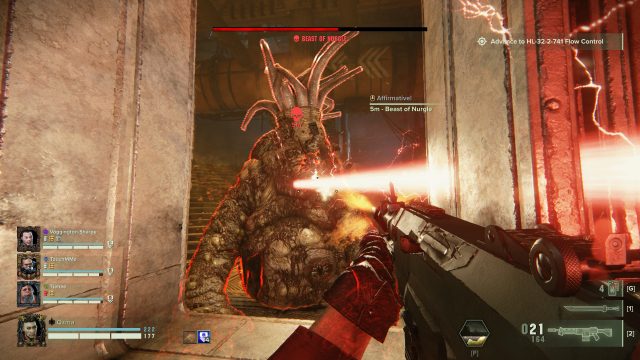 Four classes, five difficulty levels, unlockable talents, loot, and cosmetics, some of which cost real money… Much more than Vermintide 2, Darktide moved in the direction of looter shooters, but it didn’t commit fully to that path. There is no endgame in the classic sense, so the only real challenge comes from ramping up the difficulty. There are a grand total of thirteen missions with varying objectives. But mostly, your team goes down a linear path, completing tasks along the way while trying to stay alive.

Staying alive depends on the difficulty level and cohesion between teammates. Key to that concept is the toughness, regenerative shield that replenishes only in the vicinity of your squad. Lone wolves also get routinely punished by elite mobs, some of which can incapacitate, requiring teammates’ assistance. That’s pure Left4Dead DNA right there. One more fun similarity with Valve’s masterpiece is demon hosts, a deadly equivalent of the crying witch. Disturb those at your peril.

Regular mobs come in several flavors, but the general rule is that most are harmless in small groups. Hordes are much more predictable than those in Left4Dead because they are mainly triggered by completing objectives. If you stick with lower difficulty levels, danger and sense of novelty quickly wear off.

I Really Want to Shoot you in the Ass 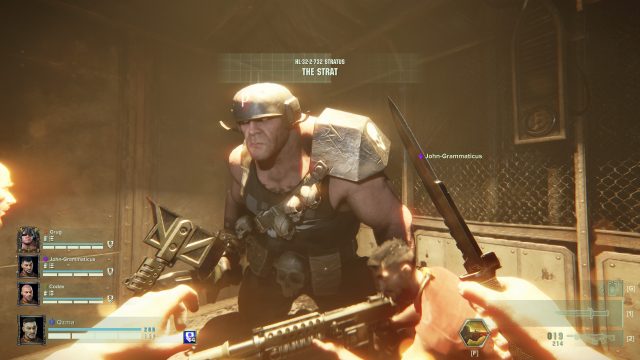 Each of the four classes is the melee/ranged hybrid with signature combat abilities and semi-specializations. Hulking Ogryn Skullbreakers, for instance, are ideal tanks because of the shield. However, not all are equally fun. Playing as a veteran sharpshooter, predominantly ranged class, can be infuriating due to melee companions constantly obscuring your line of fire. And if you have an Ogryn player in the party, frustration goes up a notch or three. Those hulking Abhumans can effectively block your entire field of fire during the typical horde assault from one fixed point (a doorway, etc). Unlike Vermintide, there’s no friendly fire, so your comrades completely lack the incentive to pay attention to you and the fire support you are providing.

The next big issue is the difficulty level. Playing with pickups you can realistically expect to tackle the first two difficulty notches. Even the middle difficulty can be massively challenging to random groups. Inevitably, you will quickly get bored of grinding the same missions and not being able to raise the stakes. The solution is, as always, playing with dependable friends on voice comms; if you don’t have that, you’ll lack the reason to stick around after reaching max level.

Last but not least, there’s a big hardware elephant in the room. Darktide is an extremely demanding game, much more than, say, Call of Duty: Warzone 2.0. It will choke your PC and spit out the charred remains. It uses a custom engine that squeezes the CPU as well as GPU, so you need a mighty machine if you wish to turn on ray tracing and other advanced features. 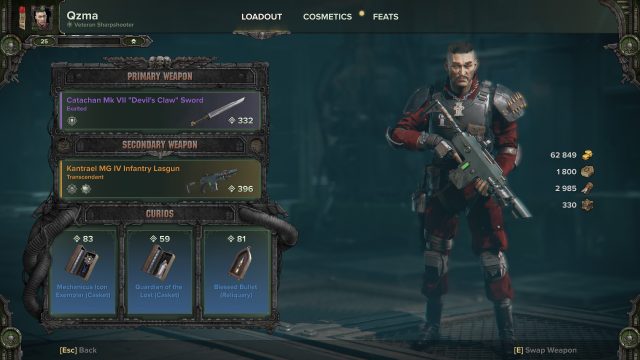 Playing as the convicted scum in the merciless universe that favors unflinching armored heroes is a clever, refreshing idea. But the real power of Darktide lies in its environmental design. The grim hopelessness of the hive city’s underbelly is masterfully presented, and if you have a beefy PC, you’ll feel like someone teleported you inside an Eisenhorn novel. The combat mechanic and meaty feeling of combat are also commendable, but the staying power of the experience depends on whether you play with random people or friends. Darktide is a team effort, and if you lack dedicated people you can summon in the evenings, you’ll quickly leave for greener pastures.

If you’re looking for the answers to the February 2023 AFK Arena Poetic Pop Quiz,…

Hogwarts Legacy is the upcoming open-world game set in the Harry Potter universe, roughly a…