Eastern European fairy tales often combine beautiful fiction, immense brutality, and strong educational components, much like their complements from the west. They are largely unknown to the global audience – every child out there has heard about Hansel and Gretel, almost none knows about The Princess Who Never Smiled. If it were not for the Witcher series, this rich eastern, mostly Slavic mythology, would be completely invisible.

Yaga provides the opportunity to dive deeper into the imaginative folk tapestry from deep, dank forests of Russia, Ukraine, Poland, Romania, Serbia, and others. Yaga, or „Baba Yaga”, isn’t just a John Wick’s nom de guerre – historically, she is a hag that lives in the forest hut that stands on chicken legs. Yaga is depicted as a morally ambivalent entity with unpredictable behavior and enigmatic motives. She might help the poor passer-by, or she may vex him and hex him, you never know with the ‘ol Yaga. 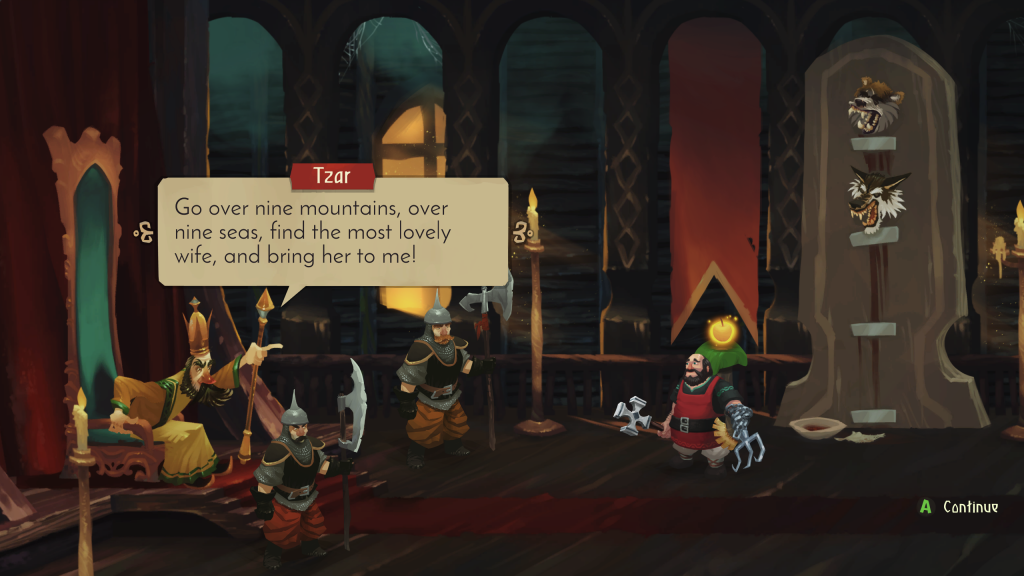 In Yaga (the game), she stars in a supporting role to Ivan, the Very Unlucky blacksmith. Our unlikely hero lost his arm in confrontation with Likho, the evil witch determined to make a meal out of him, and his example of terrible luck got the attention of the Tzar. The cruel ruler, inspired by Ivan the Terrible, tasks Ivan the Unlucky with three increasingly tricky quests. With the blessing (and kompot!) from his babushka, he delves deep into the impossible challenge that will transform him into a better or worse person, depending on the choices you make for him.

At its core, Yaga is an action RPG with a strong narrative element and a fixed (general) storyline with branching outcomes. Ivan starts in his village equipped with a hammer, some ore, several kopeks, some bread, kompot, and must immediately venture into the deep forest to seek help from Yaga. You see, Tzar’s tasks are not ordinary labors – he seeks legendary items that would provide him with strength and youth, and since Ivan knows nothing about magic, he must seek someone who does, i.e., Yaga. Each stage of his massive quest is a procedurally generated level in which Ivan has to solve one specific problem, find a particular item, or slay a mythical foe, killing tons of mobs along the way. 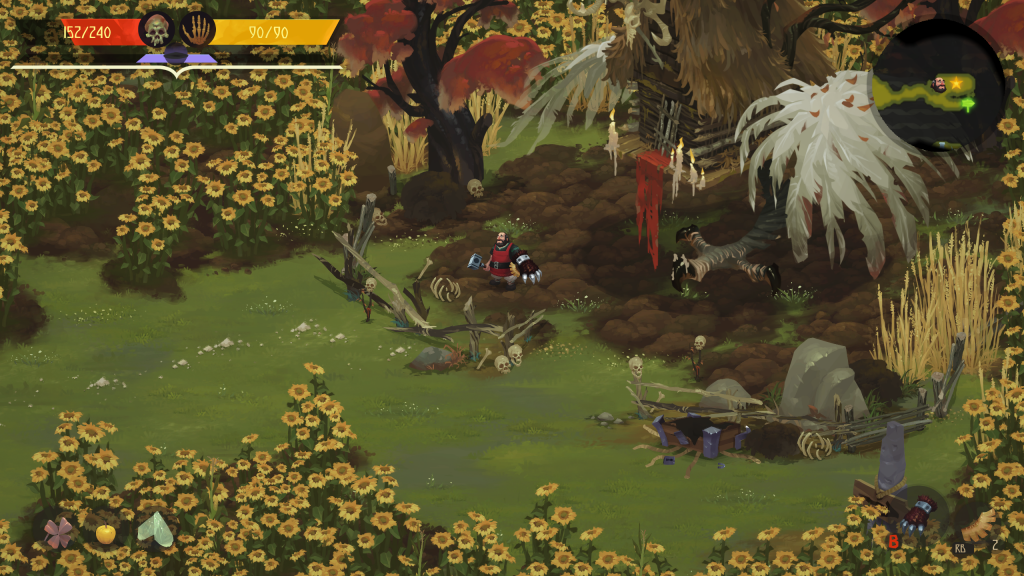 On the surface, combat feels pretty basic. Apart from hammer swings, Ivan can use various appendages he mounts on the stump of his missing arm, much like shinobi from Sekiro: Shadows die Twice. Those secondary weapons combine combat utility with specific environmental usefulness – for example, a sickle that does short-range AoE swing doubles as a tool for clearing thorny weeds that prevent access to some areas. Both primary and secondary weapons are simple by default, but since Ivan is a blacksmith, he can forge stronger variants using various ores, charms, and runes he finds around. Customizing weapons by forging fresh pieces imbued with different ingredients offers great flexibility in combat against multiple foes. If you expect to fight against ghosts in the next section, it will make sense to make and utilize the hammer with anti-ghost charms. 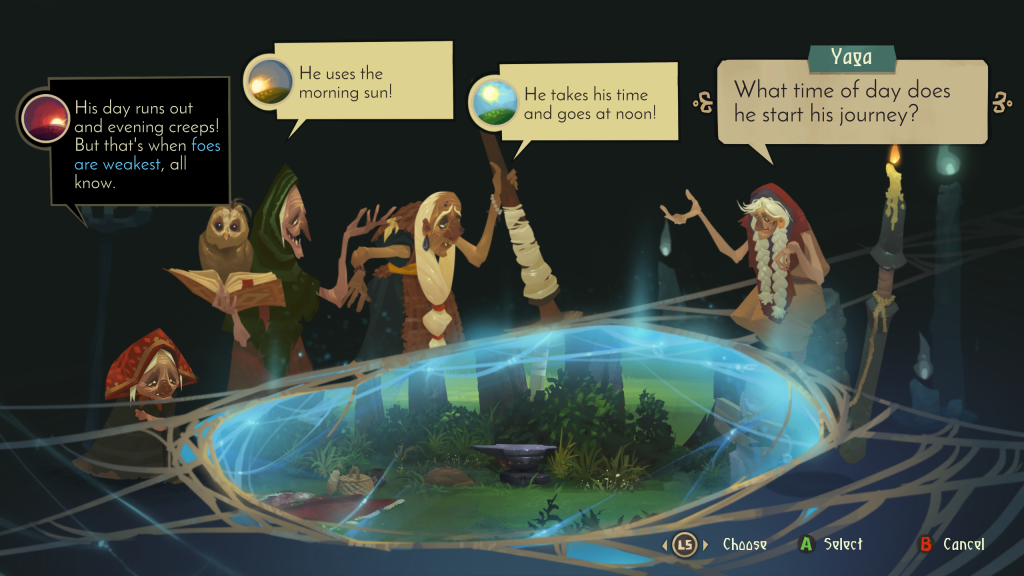 But no matter how strong your swings are, your willpower, which works as HP, will undoubtedly falter as mobs are numerous and relentless. Restoring it on the fly with magical bread or other helpful stuff will always have a side effect – your bad luck gauge will start to fill up, and when it maxes out, you’ll attract the attention of Likho, your original witch tormentress who can’t forget the taste of your flesh. By default, bad luck means that your weapons will break faster, but you could augment them with the charm that increases the damage when basked in misfortune. To succeed as a one-armed blacksmith in a world filled with ancient horrors, Ivan must learn to utilize everything, even bad luck! 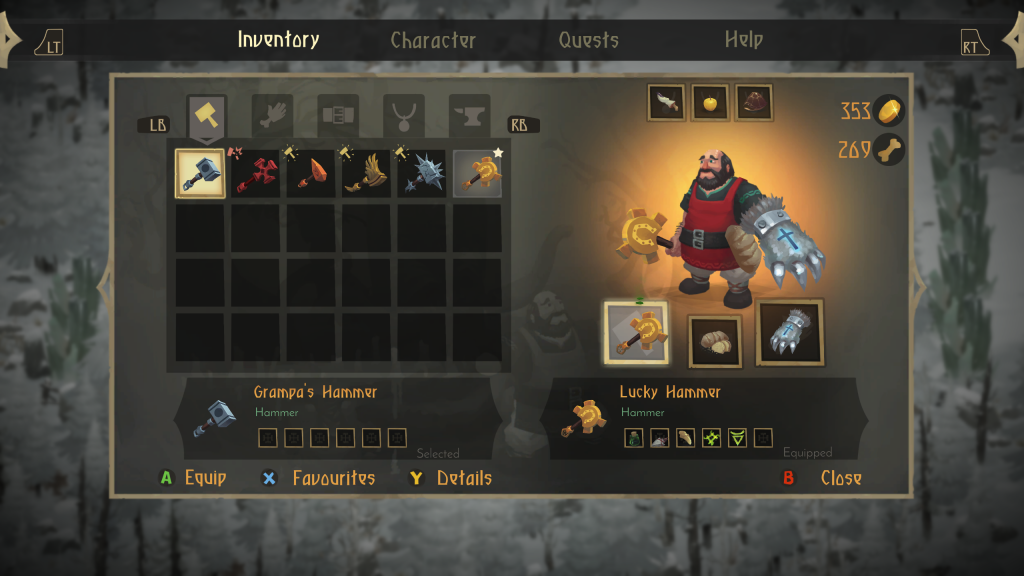 After every quest, Ivan gets to pick one boon that effectively functions as a level-up bonus, augmenting his primary stats. Those boons are dependant on his personality scores, which are modified by various quest choices. During the course of his adventure, Ivan will mix folly with righteousness, selfishness, and anger, effectively molding him and his combat style along the way. More importantly, those choices impact the game’s outcome, facilitating several playthroughs.

You can play the game in the Hardcore mode as a proper roguelike, with just one life, but I wouldn’t recommend that for average players or to anyone in their first playthrough. Most of the time, the game is not that difficult, but some of the boss fights can be brutal and unforgiving. Imagine dying near the end, after 7 hours of laborious pursuits… Hammering the gamepad, Czernobog style, screaming to high heavens, demanding your save game back. 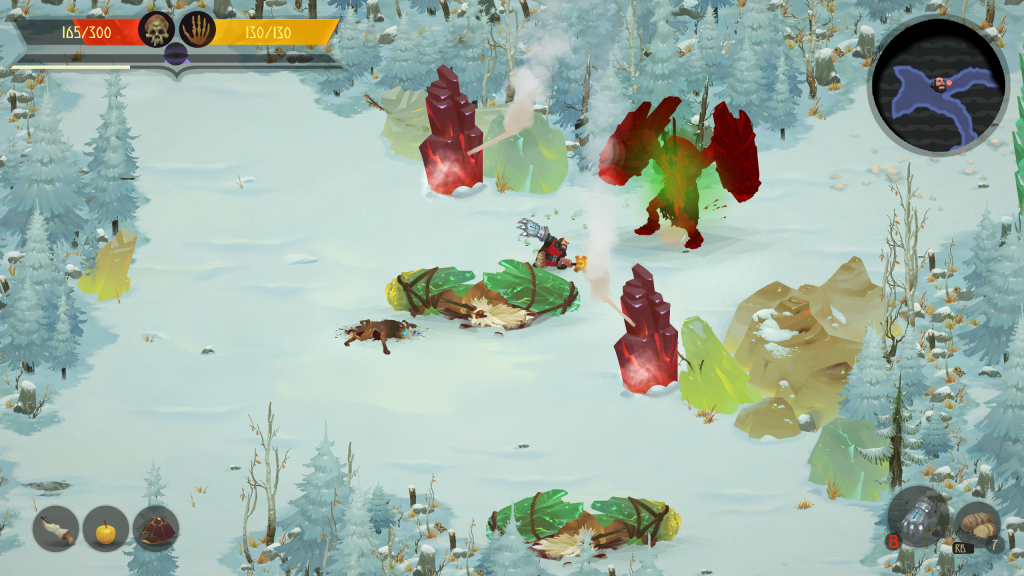 The eastern folklore, with their Czernobog, Byelobog, Morozko, Veles, Mokosh, Bukavacs, Poleviks, and others make the wonderfully weird pagan bestiary that is quite different from the usual suspects from western mythologies. There is great fun to discover their intricacies – writing in the game is solid, often presented in witty, fairy tale rhymes. Voice acting is less than stellar, though – localization to different languages is provided as text only, without the option to listen to Russian or Romanian dialogue, which would indeed dial the immersion up to eleven.

This is compensated with an extraordinary soundtrack by Subcarpați, a Romanian hip-hop band that offers style comparable to Goran Bregovic and his Wedding and Funeral Orchestra. The game soundtrack is available as a separate purchase, and I strongly urge you to consider it. It’s different than most of the stuff you probably used to and remarkable in its own right. 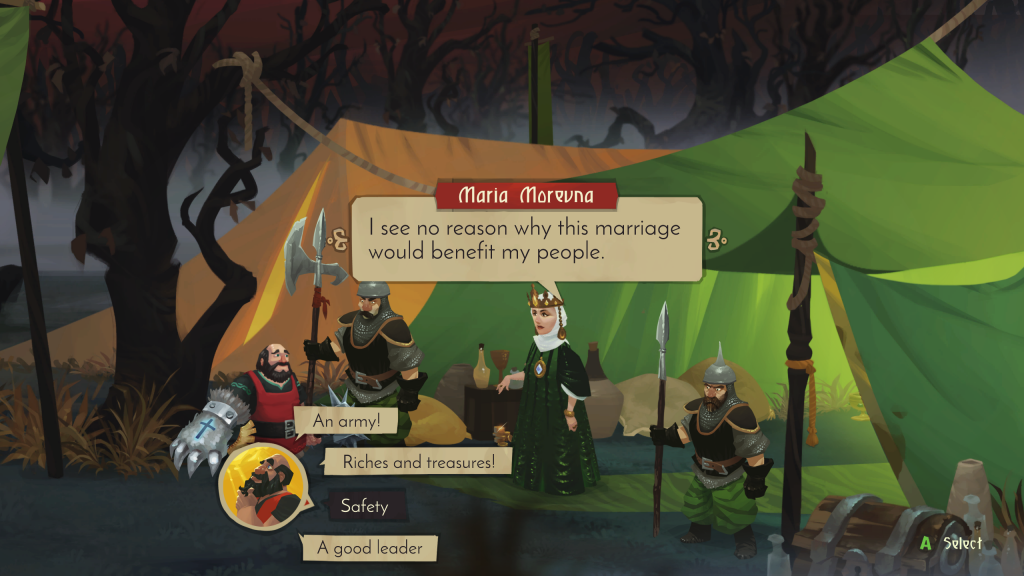 Yaga is an incredibly charming, unusual game. It is becoming apparent that the real innovation in the gaming sphere almost solely rests with indie developers. Yaga underlines the superb vibe we got from Hades in 2020. and sets the right tone for the year ahead.