Thieves’ Haven riddle is a puzzle in Sea of Thieves. It’s one of the tougher treasure hunts we’ve been on, and it took us quite a while to solve. Even getting to the island is problematic Once you land there, you’ll have to find two different cave paintings in order to get the chest. Since it’s such a troublesome voyage, we’ve decided to help other pirate crews out by writing this Thieves’ Haven riddle solution & location guide.

Where to find Thieves’ Haven?

The riddle starts off with these words: For gold to Thieves’ Haven you sail, but I’ll take a wager you will fail. The island mentioned in the riddle is on the border between quadrands P-24 and P-25. When you get there, you’ll have to fight strong winds in order to moor your ship in the cove. Do not attempt to get there on your own – you’ll need at least one other crewmate to man the sails and plug the holes in the hull. 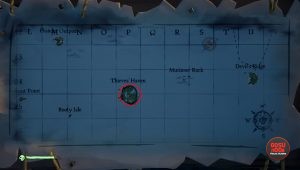 Reading this map a clue you’ll see, if at the painted heavens up high to the North East ye standing be

You’ll get the next clue as soon as you step on dry land again. It will task you with finding a cave painting – that’s the part with the “painted heavens”. The painting is supposed to depict the night sky – some stars, the moon… To find it, you’ll need to climb all the way to the top of the island, then head northeast. The painting is on a low stone wall near the wooden crane that’s holding the platform above the bay.

When you reach the painting, pull out your map and another clue will magically appear on the scroll.

Go back to the bay. Look at the north side of the shore – you should see a long ladder going up. You’ve probably already used it to get to the higher levels. Climb it again. As soon as you dismount, look to your left. There’s a rock with a bird painted on it there. Stand next to the red eyed parrot and take 9 paces north east. Pull out your shovel and dig. You’ll find the chest there, in the tunnel.

Looking for a list of working Township Redeem Codes 2022? You’ve come to the right…

The Fortnite Chapter 3 Season 4 finale is set to begin very soon. Dubbed the…