Folding Screen Monkeys are a boss in Sekiro: Shadows Die Twice. You’ll get to fight them in the Illusory Hall, but it’s anything but a regular fight. Instead of quick reflexes and combat skills, it’s your wits that will determine the outcome of this one. It would be best if you treated it as a puzzle instead of a fight. This guide will help you if you get stuck, by showing you how to kill Folding Screen Monkeys in Sekiro.

How to beat Folding Screen Monkeys?

When you reach the Illusory Halls, you’ll meet an NPC who’ll tell you more about the challenge ahead. There are three monkeys in kimonos of different colors, and a fourth one who’s invisble. You’ll have to destroy the monkeys without being seen – every time one spots you, he’ll summon two apparitions to fight you. Before you enter the fight, make sure you have a decent stock of Divine Confetti, Gachiin’s Sugar and Pacifying Agent. 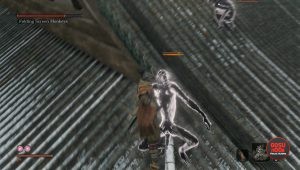 You should deal with the orange monkey first – he doesn’t see or hear too well, but he has drums which he’ll use to alert the other if he sees you. Simply approach him from the back and perform a death blow. You can deal with the other three in any order you like. The green monkey has great hearing, so you’ll have to use Gachiin’s Sugar in order to sneak up to him. Make use of the noise from the giant bell and water tower as well. The purple monkey has great eyesight – to appoach him, you’ll have to open up the big door in the tower in the far left corner of the temple. This will let the wind blow out the candles, and when you corner the monkey inside, he won’t be able to see you.

Finally, this only leaves you with the white monkey. He’s invisible, but he leaves yellow footprints wherever he goes. You can use the firecracker prosthetic to smoke him out. If you get overwhelmed with apparitions, you can use the bell you got at the start to restart the puzzle. It won’t ruin your progress, though – the monkeys you alread defeated (trapped in the screen) will stay dead.

PREVIOUS POSTSekiro What to Do With Kite in The Senpou Temple

NEXT POSTSekiro Lord Isshin Location in Ashina Castle – Where to Find